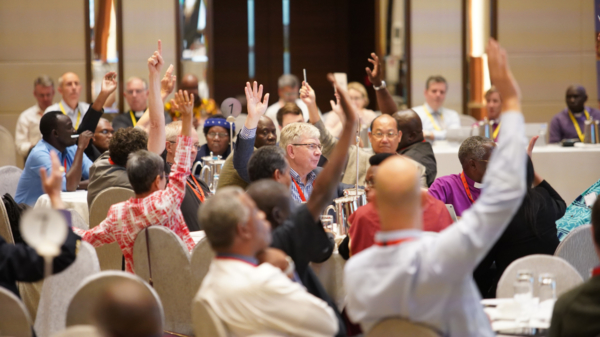 Anglican Consultative Council members raise their hands in a rare actual vote on a measure. Most resolutions were passed by “general consent” or “general assent,” rather than by a show of hands. Photo: Neil Vigers/Anglican Communion News Service

[Episcopal News Service – Hong Kong] As the Anglican Consultative Council concluded its April 28-May 5 meeting here, many members were saying the group needs to reconsider the structure of its meeting and its resolution process.

Episcopal Church ACC members Oklahoma Bishop Edward J. Konieczny, the Rev. Michael Barlowe and Rosalie Ballentine all said in a May 4 interview with Episcopal News Service at the end of the ACC’s last business session that they wished the agenda had not been so crowded. The previous meeting, ACC-16 in Lusaka, Zambia, lasted 12 days in 2016. This meeting ran eight days.

“It became evident among most everybody here that we want to have space and time to learn and understand one another, and to debate and to listen, and to have all of the emotions that go up and down and beyond,” Konieczny said. “I hope that those who have organized this meeting have heard that.”

Business sessions featured video and live presentations coupled with table discussions that many said felt at times rushed and difficult for those for whom English is not their first language. Ballentine, who attended ACC-16, said this meeting had “an absolute lack of process.”

“We talk about ‘walking together,’ but part of that walking together has to be the opportunity for us to talk together, to hear each other, to listen,” Ballentine said. “You can’t do that if you don’t create the space for that to happen.”

Barlowe wrote a lengthy Facebook post May 2 about what he called “the control exercised over the interaction and involvement of Anglican Consultative Council members.” Barlowe, who is The Episcopal Church’s executive officer and secretary of General Convention, runs an office that spends much of its time planning meetings, including General Convention, that are meant to operate within what he called the church’s “commitment to participation and transparency” in governance.

During the ACC’s contentious debate about sexual identity earlier on May 4, Archbishop of Canterbury Justin Welby frequently spoke in French, translated texts displayed on the screens in the room into French, and asked others to interpret his comments and to translate the texts into Spanish and Swahili. However, those are only three of the many languages spoken by ACC members.

“Much of the disagreement and much of the confusion and the anxiety today was around language,” Konieczny said. Bishops from the global south told him that they did not understand the wording of parts of his resolution. And, they told him that some word choices would convey concepts that would be “extremely difficult and different” in their culture, he said.

Thus, Konieczny said, those bishops were reluctant to consider the motion. Their reluctance brought the meeting to a halt as Konieczny, some of those bishops and Welby drafted a compromise amendment that rewrote the resolution. Welby eventually explained the compromise in French, translated the text into French, and asked other members to do so in Spanish and Swahili.

ACC members need to have more than partial translations or to know enough English to able to figure out what’s going on, Konieczny said. They all need a setting in which they can carefully examine the proposed actions and fully participate in the debate so that the council can hear all points of view, he said.

Barlowe said the difficult debate on the sexual-identity resolution showed the “collapse of control,” adding that “the controlled agenda and everything else actually didn’t do what perhaps was intended, which was to stifle debate and conversation.” Instead, when people had a chance to truly debate an issue, he said, they had things to say, but interpretation and translation issues and the lack of previous engagement on the issue “made the situation worse.”

ACC Vice Chair Margaret Swinson told her colleagues at the end of the meeting’s last business session that it was clear to her that “we need a process review around resolutions.”

She cited two reasons. The first was “for the sanity of the resolutions committee,” which often met while others were doing other things such as eating or visiting parishes in Hong Kong. 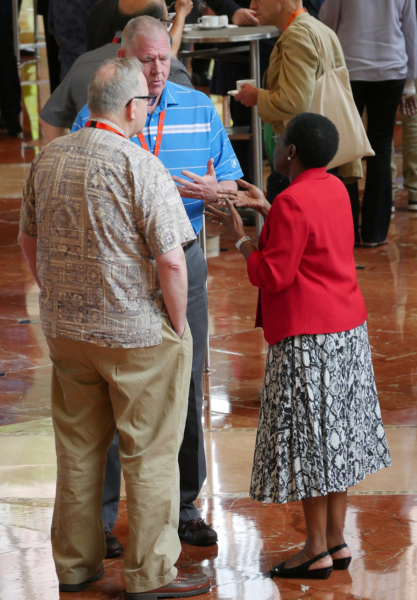 The other is the fact that members for whom English is not their first language struggled throughout the meeting from the lack of any formal interpretation or translation services.

There were no official interpreters at the meeting, which was conducted in English. Earlier in the week, Chief Operating Officer David White acknowledged that “for a very large number of people here, English is not your first language.” Many reports and other documents are available in English, French, Spanish and Portuguese, something that was not true at previous ACC meetings. However, resolutions were available only in English.

White said it would have cost the communion office $10,000 to $15,000 per person to provide interpretation services to those who needed it, a cost he called “financially impossible.” He said those members were asked to “bring somebody with you and we will deal with translations that way.”

More than once during business sessions, Welby called attention to the fact that, as he put it during one point of order, ACC-17 was “insisting that [members] use English, when either they may not read or understand English, or it’s their second or third or even fourth language.”

Swinson said resolution-filing deadlines would need to be earlier to allow for translation. She committed the communion’s Standing Committee, of which she is a member, to reviewing that process.

The council’s rules of order seemed fluid at times, with council officers sometimes strictly enforcing announced deadlines and limits on resolution amendments, and at other times offering flexibility. May 4 featured debate in the midst of sometimes-changing rules about the admissibility of amendments.

The council did not actually vote on many resolutions or amendments, but rather the members were asked by the chair, “Are you content to give your general assent to this resolution?” Sometimes, the term “general consent” was used. The chair did not ask for dissenting voices. The session chair did and could decide to put a motion to a show of hands.

Barlowe said that while The Episcopal Church is not perfect, it tries to “level the playing field through things like rules of order and standard parliamentary procedures.” Such rules can seem boring, he said, but they provide “a way to hear all voices.”