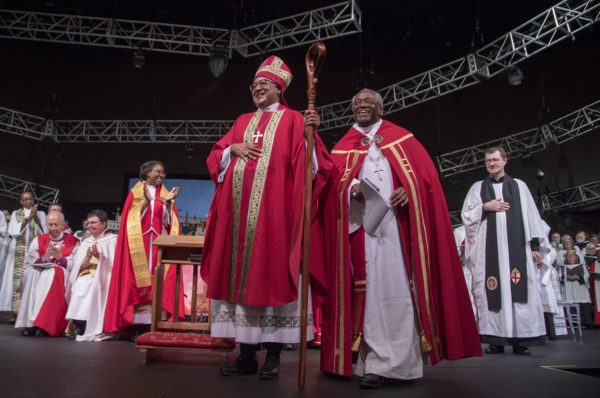 Roaf became both the first woman and the first African American bishop in the diocese’s 36-year history. Presiding Bishop Michael Curry led the service as chief consecrator. The Rev. Judy Fentress-Williams, professor at Virginia Theological Seminary and assistant pastor at Alfred Street Baptist Church, both in Alexandria, Virginia, was the preacher.

In addition to a 116-voice mass choir made up of choristers from across the diocese, the LeMoyne Owen College Concert Choir performed the Prelude. Following the service, a celebratory reception was held at the church.

On May 5, the newly consecrated bishop was formally welcomed and “seated” at St. Mary’s Cathedral in Memphis.

Roaf was elected at the Diocesan Convention on Nov. 17 on the first ballot. Prior to election, she was the rector of St. Philip’s, the oldest African American church in the Episcopal Diocese of Virginia, a position she had held since 2011.

Roaf is a lifelong Episcopalian who grew up in Pine Bluff, Arkansas. She received her bachelor’s degree from Harvard University and a Master of Public Administration from Princeton University. She later received a law degree from the University of Arkansas, Little Rock, and clerked for a federal judge for two years before practicing law in New Orleans. She attended Virginia Theological Seminary, where she is vice-chair of the Board of Trustees.

Roaf succeeded the Rt. Rev. Don Johnson, who had served as the third bishop of the diocese since 2001.

The Diocese of West Tennessee was established in 1983 and covers all of Tennessee west of the Tennessee River. It has 8,260 active members and an average Sunday attendance of more than 3,000.