Members of the Anglican Consultative Council pose May 2 outside their meeting room in the Gold Coast Hotel for a group photo. The ACC is composed of bishops, clergy and laypeople, making it the communion’s most representative body. The Episcopal Church’s ACC members are Oklahoma Bishop Edward J. Konieczny, the Rev. Michael Barlowe and Rosalie Ballentine of the Diocese of the Virgin Islands. (Click on the photo to enlarge the view.) Of the 99 members present at the 17th meeting of the ACC, 69 are male and 30 are female. More than half are new members. Fifty-six are ordained and 43 are lay. Of the 56 ordained members, nine are women. Photo: Mary Frances Schjonberg/Episcopal News Service 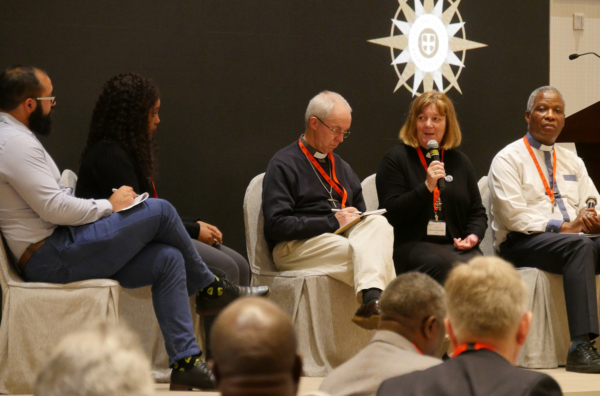 For the first time, this ACC meeting includes eight youth members from five regions across the Anglican Communion. The communion’s standing committee agreed to a request from ACC-16 to allow such membership.

On May 2, youth members Isaac Beach of New Zealand and Basetsana Makena of South Africa conducted a panel discussion with Archbishop of Canterbury Justin Welby, Southern Africa Archbishop Thabo Makgoba and Canadian Diocese of Edmonton Bishop Jane Alexander, posing questions the two said they distilled from conversations with their other youth colleagues.

Makena led off the session asking if the three were satisfied with the fact that the youth members plus three other young people who serve as province-specific members make up 14 percent of the council.

“We’re a work in progress,” Makgoba said, adding that the church needs to diversify its leadership structure to include more youth and women as well as other minorities and races. Alexander said that, while she was not satisfied with the percentage, “it’s amazing to see the youth delegates participating fully in the life of the ACC … but in terms of us really hearing that voice and that passion, I don’t think we’re there yet.”

Welby cautioned that, in the Church of England and probably elsewhere in the communion, “we think youth involvement in the church means sitting on committees,” while true involvement in the church is about “people going out and changing the world.” He said he is wary of “ending up with a series of quotas, which would mean that we have identity politics,” but when the effort to change the world only “looks like we’re going out as a bunch of middle-aged white men, then we need to ask ourselves some serious questions about why we’re neglecting the vast majority of the church.”

However, Welby said, “simply putting people on more committees is necessarily not a good answer to the problem.” What empowers young people, he said, is “the liberation of people of all ages in ministry and witness and transformation and activism in the right sense, that is being active in the service of Christ, and of deepening religious life.”

Council members passed eight resolutions on May 3 from a current list of 24.

The council does not actually vote on resolutions, but rather the members assent. The chair of each session asks the members, “Are you content to give your general assent to this resolution?” The chair does not ask for dissenting voices. 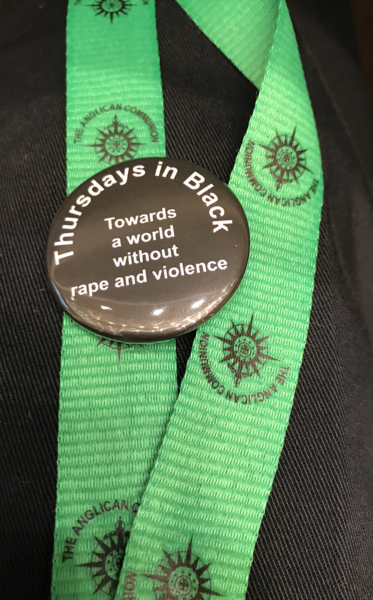 Those attending ACC-17 were encouraged to wear black on May 2. The Anglican Communion supports the World Council of Churches’ Thursdays in Black campaign. The effort urges people “to declare you are part of the global movement resisting attitudes and practices that permit rape and violence.” The organization notes, “Often black has been used with negative racial connotations. In this campaign black is used as a color of resistance and resilience.” Photo: Mary Frances Schjonberg/Episcopal News Service

The resolutions agreed to on May 3 were for the following:

* calling for continued support of the colleges and universities of the Anglican Communion;

* encouraging networks to improve theological education in the Anglican Communion;

* recognizing that there is a global climate emergency, encouraging member churches to make the Fifth Mark of Mission (To strive to safeguard the integrity of creation, and sustain and renew the life of the earth) “a living testament to our faith,” and encouraging the Lambeth Conference 2020 to be as environmentally sustainable as possible;

* calling for work to develop an Anglican Health Network;

* affirming the work of the Anglican Alliance and encouraging provinces to support it;

* commending the emphasis on intentional discipleship and disciple-making in the Anglican Communion Office’s strategic plan and asking the Mission Department to develop a resource hub “to support and equip the culture change in the communion towards intentional sharing and living a Jesus-shaped life”; and

* encouraging member churches to invest in pathways to education and employment for young laypeople.

ACC members passed five resolutions on May 1, four dealing with welcoming and commending for study statements from some of the communion’s ecumenical dialogues and one concerning safe-church practices. The actions on May 1 and May 3 leave 11 resolutions for May 4, the last day of business sessions for ACC-17. The meeting ends with local parish visits during the morning of May 5 and a joint closing Eucharist that afternoon.

On May 3, council members also prayed about each of six so-called “public statements” and then spent time in group prayer for the six together. The statements, which could be submitted by any member, are in Archbishop of Hong Kong and ACC Chair Paul Kwong’s words, “expressions of solidarity for particularly concerning or troubling situations around our communion.” They are not the same as formal resolutions.

The public statements included ones that:

* express sorrow for and support of Sri Lankans following the Easter terrorist attacks, and call on the government, civil society and people of faith to work together to counter any escalating tensions and promote the safety of all citizens of and visitors to Sri Lanka;

* encourage Anglicans to pray for the implementation of the Revitalized Agreement on the Resolution on the Conflict in South Sudan; for forgiveness, reconciliation and peaceful coexistence among the South Sudanese people, and for support for relief and rehabilitation for internally displaced persons and refugees;

* declare solidarity with the Sudanese people, call for a peaceful transition to civilian democratic government and the protection of religious freedom especially for the Christian community, urge the international community to support refugees and internally displaced people and their communities, and ask Anglicans to pray for peace and the empowerment of the vulnerable;

* support peace on the Korean peninsula;

* lament continuing tensions between Pakistan and India, give thanks that hostilities between the countries were de-escalated in February, implore both nations to pursue peace and encourage the growth of mutuality and trust in the body of Christ for the Christian churches in each country; and

* lament the natural and humanitarian disaster caused by Cyclones Idai and Kenneth, and call on Anglicans to send messages of solidarity to the people of Mozambique, Malawi and Zimbabwe and to offer practical support through the appropriate relief agencies. 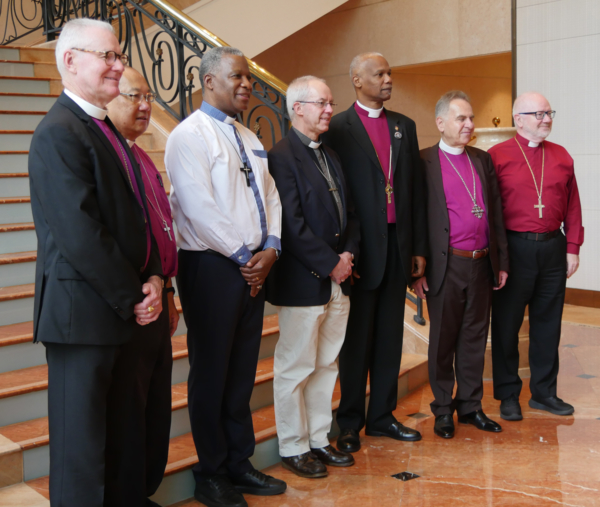 The ACC voted May 3 from among seven nominees for three open seats on the communion’s 15-member Standing Committee.

As the voting process was about to be explained, Archbishop of Canterbury Justin Welby raised a point of order, noting that the fact that materials about the nominees, the process and the ballot were in English, thus “insisting that [members] use English when either they may not read or understand English, or it’s their second or third or even fourth language.”

“Thank you, Your Grace,” responded Darren Oliver, the ACC’s legal adviser, suggesting that the council pause after his explanation of the process so that those who need it can have a “more detailed explanation or translation, if necessary.”

There are no official interpreters at the meeting, which is being conducted in English. Earlier in the week, Chief Operating Officer David White acknowledged that “for a very large number of people here, English is not your first language.” Most documents are available in English, French, Spanish and Portuguese, something that was not true at ACC meetings in the past.

However, White said, it would have cost the communion office $10,000 to $15,000 per person to provide interpretation services to those who need it. “We wanted to be able to offer translation service for everybody who needed a certain language translation in order to better understand our business,” he said. “The reality is there are so relatively few of you who have told us that you are not able to follow the meeting that that became financially impossible.”

White said those members were asked to “bring somebody with you and we will deal with translations that way.”

The election results will be announced the morning of May 4, ACC-17’s last business day.