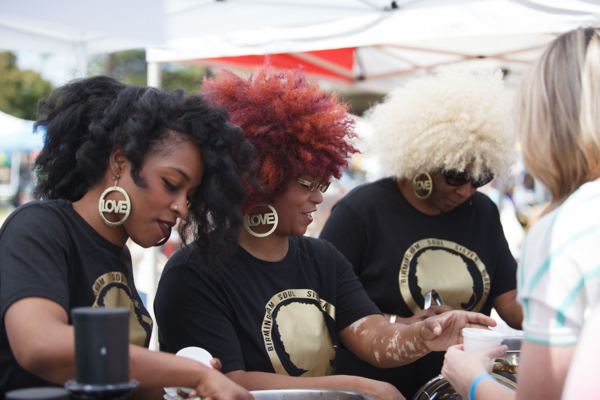 At least 3,000 partiers are expected May 4 for the Gumbo Gala, now in its 14th year as the largest Episcopal event in Alabama. The Gumbo Gala annually raises $100,000 for Episcopal Place, which provides 141 units of affordable housing and independent living in Birmingham for seniors and adults with disabilities.

According to Episcopal Place’s history, a “mustard seed” started all this in the 1970s when an elderly Episcopalian wrote to then-Bishop Furman Stough about no longer being able to live by herself and having no place to go. The gumbo competition that started in the wake of Katrina today enables Episcopal Place to care for older adults with fixed or limited incomes who cannot afford rising apartment rents or maintain a home. 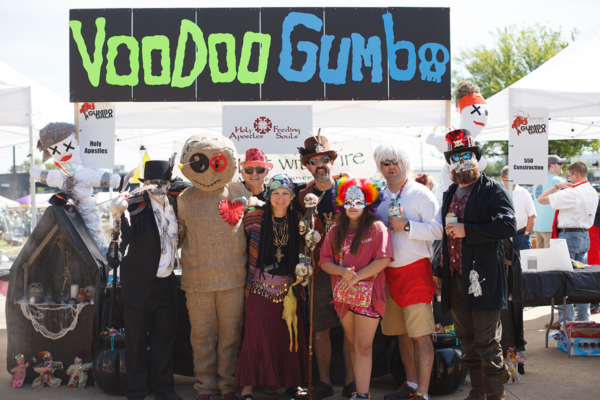 The Episcopal Church of the Holy Apostles vied for the Most Divine Gumbo trophy and the Spirit Award at the 2018 Gumbo Gala. Photo: Sara Walker

In August 2005 as Hurricane Katrina approached the Mississippi coast, Lynnes Thompson told his wife Linda, “Get the dog! We’re gone.” The storm destroyed their home as the couple headed to family in Birmingham, 350 miles northeast of New Orleans.

Because Linda Thompson has chronic health issues, the couple needed somewhere stable near medical facilities, like Episcopal Place. Within a month, they and their dog moved in, as did three other couples from Katrina’s path.

“For these survivors, initially it was about shelter and food. Then it was dealing with emotional and mental health issues,” recalled Episcopal Place social worker Shannon Atchenson. “One couple had lost a dog. There was some depression and anxiety. We wanted to give residents a sense of belonging because, when you’ve lost your home, that’s important.”

Residents don’t have to pay for supportive services like transportation, food delivery and pet care; those are covered by donations to the Episcopal Church Foundation and volunteers. With need rising in the hurricane aftermath, Episcopal Place knew “we weren’t going to get support from the government for the Katrina people or for anyone,” Atchenson said.

Meanwhile, as a way of settling in, Lynnes Thompson, a Baptist, began a nondenominational Bible study at Episcopal Place.

“Episcopal Place has done more than their part for all of us,” said Lynnes Thompson, now 78. “It’s quite expensive to operate a place like this that’s so good.” 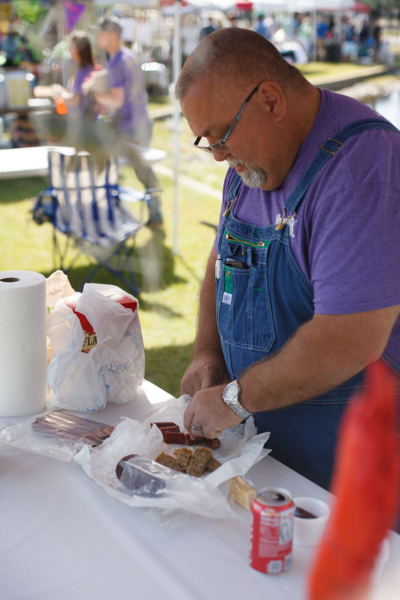 A year before Katrina, Hurricane Ivan had flooded Episcopal Place. Staff sent out an SOS, and Amanda Ward, Episcopal Place’s activities and volunteer coordinator, recruited her classmate Matt Ennis to help. The power was out at his corporate job, so he didn’t mind wet vacuuming the flood water at Episcopal Place.

Volunteering that day made him realize that he wanted to work closer with people in need. The next day Ennis quit his job. He was a volunteer supporting Ward’s fundraising efforts at Episcopal Place when Katrina hit.

“Amanda and I had seen how a chili cook-off was a good business model because you charge people to cook and to eat,” said Ennis, a member of All Saints’ in Birmingham. “We had these new residents from Hurricane Katrina, so how about gumbo?”

Despite running out of the main attraction, the first Gumbo Gala raised almost $10,000 for Episcopal Place, with jazz and a second line parade that celebrated the Gulf Coast evacuees. Over time, it created even more community pride as Episcopal Place residents competed with their own gumbos and felt supported by their Birmingham neighbors.

Ennis married Ward in 2007, built a nonprofit fundraising firm and every year gathers their two kids and assorted relatives and friends to compete in the Gumbo Gala. His stinky secret to prize-winning gumbo is the rich seafood broth he prepares in advance with discarded fish scraps from a seafood market.

“Call it a progressive mindset or a sense of social justice, but when Episcopalians get an opportunity like this to help, they just do it,” said Ennis. 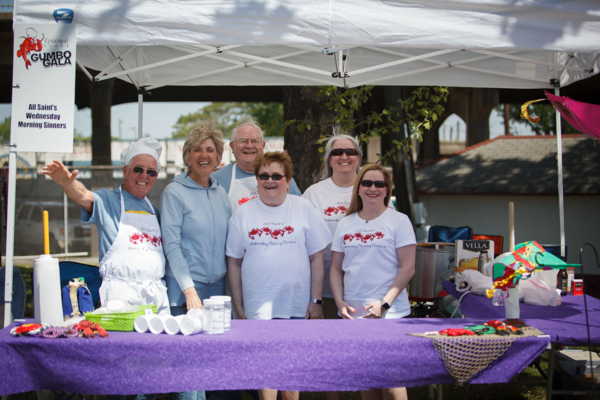 The Wednesday Morning Sinners team from All Saints’ Episcopal Church has competed in all 14 years of the Gumbo Gala, the biggest Episcopal event in Alabama. Photo: Sara Walker

Easy to rue/ruin the roux

Early on, St. Luke’s and St. Mary’s were the church teams to beat in the quest for the Most Divine Gumbo, which is determined by the palate of Alabama Bishop Kee Sloan and two local priests. Church of the Ascension called its team the Gumbo Filers, a nod to filé, the powdered sassafras originally used by Native Americans that gives gumbo its flavor. One of the church’s members, Nancy Sharp, lives at Episcopal Place and competes on the team.

The Gumbo Filers twice have won the first-place trophy (an engraved golden stockpot) behind the leadership of professional chef John Wilson, who first tasted gumbo while apprenticing in New Orleans.

“It’s so hard to describe gumbo because it’s an entity unto itself,” he said. “You have to be in the South and taste a lot of gumbo to understand. Everyone makes it their own way and it’s all wildly different. It’s so complex that you need the first few spoonfuls to try to appreciate what’s going on.”

Originally from Boston, Wilson maintains that the heart and soul of any decent gumbo is the roux (pronounced “rue”), a thickener of flour and fat that originated in French cooking. At least one Gumbo Filer will keep a constant eye on the roux. “It needs to be a deep dark color, like roasted chestnuts,” Wilson said. “If you can get it to that point without burning it, you are going to have a good gumbo.”

To the roux, his team will add broth, meat (this year it’s smoked duck) and locally grown vegetables diced the day before. Their competition entry is 15 to 20 gallons, some of this and some of that, making a sum that is greater than its parts. For Wilson, the multiplying effect (more fish focused, less on loaves) reflects Episcopal outreach.

“Gumbo is typical of what we do and who we are: We help people in need,” Wilson said. “Cooking is what I do, so that’s what I contribute.” 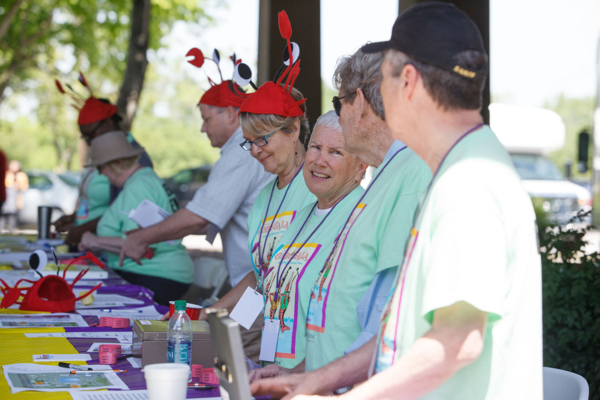 Competitive cooking for charity draws well in the South, especially in the months between college football seasons. While only the churches compete for the Most Divine Gumbo prize, the Gumbo Gala has divisions for professional chefs, amateur cooks and student teams.

“I think we have an edge on them because I’ve won this a couple of times and know what the judges are looking for,” Wilson said. “It’s about layers of flavor and how you’ve put that together. The judges are pretty experienced professionals with good palates, and they can taste those layers.” 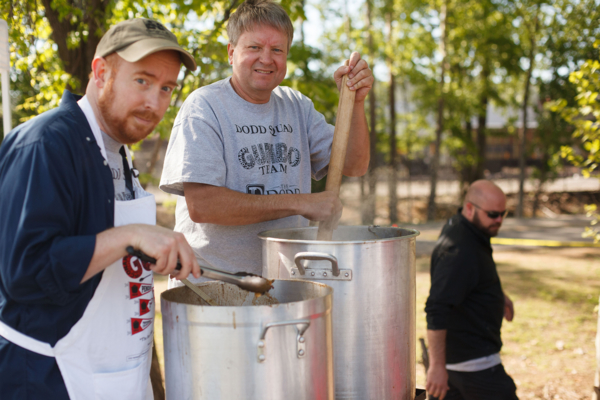 This year, 15 churches will compete in a field of 35 to 40 teams. All Saints’ Episcopal Church will send two teams: the Young Adults and the Wednesday Morning Sinners, a team of retired men who have competed in every Gumbo Gala, a 14-year streak. A newcomer in the professional division is Bright Star, in operation since 1907 as Alabama’s oldest restaurant (its seafood gumbo sells for $4.75 a cup and $6.75 a bowl).

“Despite all of the spirited debates and hoopla of which gumbo is best, one thing is for sure: this delicious comfort food that calls Southerners back home is made up of many different ingredients that all arrive from many different places, much like Episcopal Place and the church,” said Jamie Whitehurst, director of development at Episcopal Place.

“Each ingredient is wonderful on its own, and when they all come together to make gumbo, something magical happens. In that regard, we are proud Episcopalians who come from many backgrounds, with many ideas and understandings of God’s word. Gumbo Gala started 14 years ago with a mission, much like Episcopal Place. Mission begins with the breath of God, and it is through helping others that we experience his boundless love.”