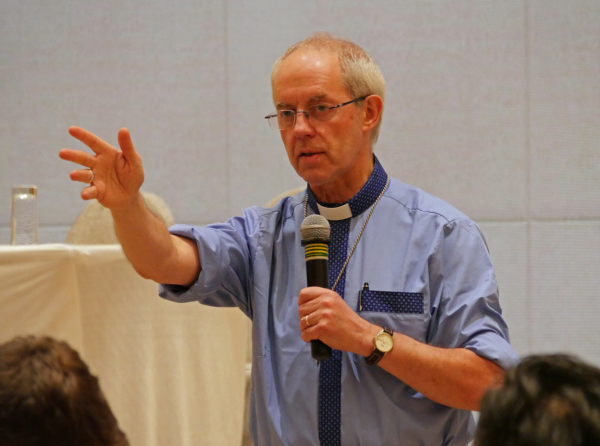 [Episcopal News Service – Hong Kong] Archbishop of Canterbury Justin Welby continues to be asked about his decision to exclude the same-sex spouses of bishops invited to the 2020 Lambeth Conference.

“For some reason, I thought that question might come up,” Welby replied when Oklahoma Bishop Edward J. Konieczny asked him during an evening question-and-answer session here May 1 to elaborate on his decision and his thoughts about how to work through the disagreements in the communion over human sexuality.

This is the second time Welby has addressed the issue here. The day before the Anglican Consultative Council, or ACC, began its 17th meeting, Welby said during an April 27 news conference that the council cannot discuss his decision because the ACC constitution precludes the group from dealing with doctrinal matters.

“I think I would put it very simply,” Welby replied to Konieczny. “We are deeply, profoundly divided over the question of human sexuality.

“I find myself deeply torn,” he said, adding that he has publicly said numerous times that he is “personally conservative” on the issue of marriage equality.

“But I am equally convinced that it may be that I am wrong. I think that part of Anglican theology is always an assumption that we need to go on listening. Anglican theological method never closed things down finally apart from those things that are in the creeds,” Welby said. “Secondly, I do not believe this is a church-splitting issue.”

The archbishop said he is often accused of “preferring unity over truth,” an accusation he called nonsense because one cannot have “truthless unity” or “divided truth” in the church.

Welby said he believes that “the Bible, properly interpreted, is the final source for matters of faith and practice.” Nowhere in Paul’s two letters to what Welby called a divided and dysfunctional church in Corinth does Paul tell them he is going to abandon them and start over someplace else, Welby said.

Human sexuality is “an incredibly important issue,” Welby said, adding that he tries to remember this is about people. “They’re not a problem or an issue; they’re people, they’re human beings with deep profound feelings, with a desire, as every human being has, for affection, intimacy and love,” he said.

The job of the archbishop of Canterbury, and of every bishop, is to be a “focus of unity,” Welby said. “Therefore, I find myself caught in a really difficult position where we seek to bring everyone together, to look at these questions together, to see if we can learn to do so lovingly, to disagree well, to learn to love one another profoundly and deeply, and to respect each other’s human dignity. And there’s a lot of way to go on that.”

Speaking specifically about the 2020 Lambeth Conference, Welby said he was faced “with a really difficult decision, because an awful lot of people would be excluded by the inclusion of other people, and they’re people in really bad places. I love them and I love the people who I’ve not felt able to invite. I’ve got no better answer than that.”

The archbishop said he hopes “we can get to the point that, God willing, we can love one another deeply” but “we’re a long way from that.”

“We can only do it if we decide together to do it. We can’t do it if any individual part of the church says, ‘I’ve got to win and everyone else has got to lose.’ It doesn’t work that way.”