[Episcopal News Service – Hong Kong] Ten years ago when the Rev. Terrie Robinson was asked to create a women’s desk at the Anglican Communion Office, she was not sure where to begin. Then she received an email containing photos of a murdered woman, and it helped to point the way.

The photos came from a bishop who had received them from elsewhere in the world. “Lord, have mercy,” he wrote. Robinson, who is leaving her post at the communion’s director for women in church and society at the end of May, opened only three of photos. They were enough to show her the sequence of the naked woman’s death and dismemberment at the hands of a group of men.

Robinson told members of Anglican Consultative Council April 30 that the photographs depicted “the abuse of power and about rendering another powerless; it was about sin” and “probably taken as some sort of trophy or to spread and circulate fear in a particular community.” 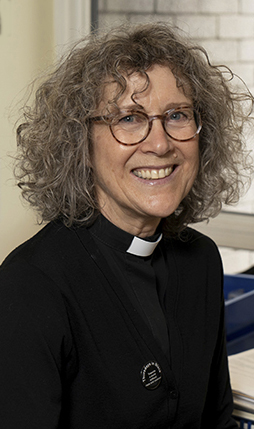 Robinson said she realized that the women’s desk “could become a point of contact for any woman or any man in the Anglican Communion who was doing something or wanted to do something about violence against women and girls.”

She found a number of such projects scattered across the communion that “needed to be connected somehow, to be properly noticed and affirmed by church leadership.”

To this day, the work is under-resourced and usually relies on women to provide the energy and push the work forward, she said.

Robinson’s written report summarizes a number of examples of such work across the communion, such as “My Faith Says No!” in which the Diocese of Polynesia coordinated leaders from nine faith and cultural groups to produce a multimedia campaign advocating for an end to violence against women and girls.

Such work is a “huge building block of God’s reign on earth as it is in heaven,” she said.

“But for real and lasting change, we must tackle and transform the particular social norms, attitudes, scriptural misinterpretations and behaviors that sustain and exacerbate unjust power relationships between men and women, girls and boys, whether this is in our households or in our churches or embedded in the systems and structures that effect our lives,” she said.

Robinson said the focus of her efforts have shifted over time to work with Anglicans and ecumenical partners “to lift up the values of our Christian faith,” including the teaching of Christ and the stories of the faithful women who followed him “and were the first to tell the good news of his resurrection.” Those values “simply allow no room for ranking power and entitlement according to gender or remaining silent in the face of gender-based violence or devaluing the girl child or being complicit in the stigma that still surrounds victims and survivors of abuse and violence.”

One outcome of that shift in focus is a new set of study materials developed by academic theologians from six continents, led by Robinson, called “God’s Justice: Just Relationships between Women and Men, Girls and Boys,” which she asked the ACC to endorse so that they can be offered to the communion’s theological colleges, seminaries and training programs for both lay and ordained ministers. She said that many of those schools and programs “haven’t yet touched on just power relations between women and men,” even though they are what she called an essential part of such formation and leading a Jesus-shaped life.

Anglican women and men need to work together, and with ecumenical and secular partners, to achieve gender justice, Robinson said. One model of this work, she said, is the international Side by Side faith movement for gender justice.

Robinson said she hoped that Anglicans will come to the point of always asking how their actions will affect relationships and “what is this saying about power and how power is used.” They should choose only those actions “that we could say or do in front of Christ crucified” and in front of a young woman made in the image of God but degraded, rendered powerless and murdered by a group of men.

When reflecting on her work, Robinson said, “It has all been about a simple Gospel truth that whenever the image of God is disfigured by violence or abuse or the misuse of power in any way, then it is a sin against the Holy Spirit.” God’s image should be celebrated as “a picture of being human, not of gender,” she said.