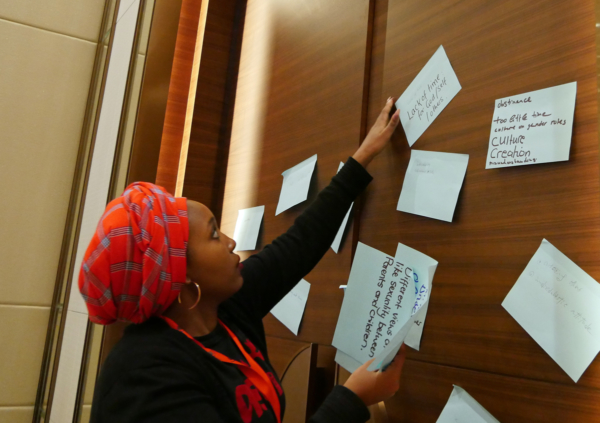 On May 1, the ACC suspended its work, and members had the option of attending a 90-minute “consultation” on Living in Love and Faith, the Church of England’s new effort to think theologically about diverse opinions on human identity and sexuality. Its subtitle is “Christian Teaching & Learning about Human Identity, Sexuality & Marriage.” Slightly less than half the council attended.

Eeva John, who called herself the “enabling officer” of the project, said it is “large, ambitious and complex.” The work was begun in 2017 after the Church of England’s General Synod rejected a report on human sexuality from the House of Bishops.

The project is not meant to declare the rightness or wrongness of same-sex marriage. Bishop of Coventry Christopher Cocksworth told the Church Times earlier this year that it is about “helping people to learn how to think, and how to better understand.” Cocksworth chairs the group that is coordinating about 40 scholars working in theology, history, biblical studies and science.

“It will rather be a pedagogical process that will help to put the church, and the bishops in particular, in the sort of position by which they can develop whatever answers to particular questions are needed,” Cocksworth told the Church Times.

At the same time, Equal, the Campaign for Equal Marriage in the Church of England, was recently launched to advocate a change in the official teaching and practice of the Church of England to allow same-sex marriage. When the United Kingdom decided to allow same-sex marriage, it “put the church in a situation it’s never been in before where it has stepped aside from where the country stands legally,” John said.

She noted that the Church of England has considered the issues around human sexuality for about 30 years. However, she said, the church has decided it needs some “quite serious theological reflection” about not only human sexuality, identity and marriage but larger societal issues, such as commodification, consumerism, materialism, individualism and the “idolatry of choice in our society, being able to choose who we are, what we do, what we consume.”

It comes down, she said, to asking where the church fits into a changing culture and what “it mean to be a disciple of Jesus in England today.”

During a group discussion, the Ven. Wendy Patricia Hope Scott, ACC member from the Province of Aotearoa, New Zealand and Polynesia, said her province has “gone through this and come out on the other side” with “scars.” She prayed for the project after telling John that prayer “is the only thing that’s going to get you through this.”

ACC member from the Church of Scotland Alistair Dinnie said his province went through “a lot of pain, a lot of soul-searching,” but it has gotten to a place where the vast majority of people, regardless of where they stand on the issues, are happy with the foundation on which the decision to allow same-sex marriage was made. Dinnie added that “to my great sadness, we have not managed to bring everybody with us because we have lost some of our community after the decision.”

During a pre-meeting news conference April 27, Archbishop of Canterbury Justin Welby said he hoped the project will “lead to significantly more careful listening to each other around the world.”

The attendance-optional session required the suspension of the council’s work because “it doesn’t fall within what the ACC can do,” according to Welby. He had contended earlier in the news conference that the council cannot discuss his decision to exclude the same-sex spouses of bishops invited to the 2020 Lambeth Conference because the ACC constitution precludes the group from dealing with doctrinal matters. 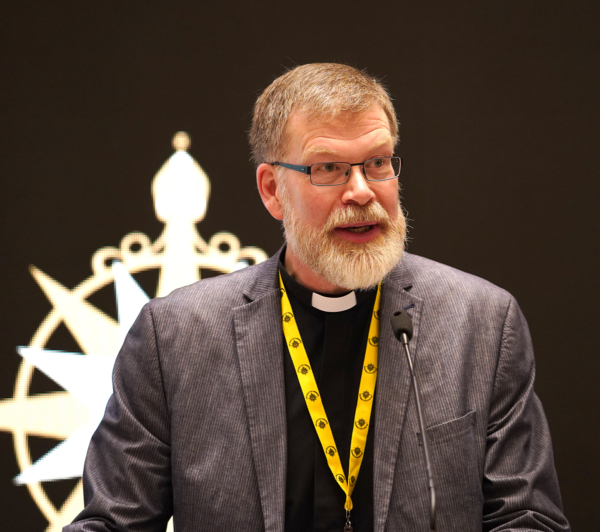 The council approved four resolutions May 1 related to the communion’s relationships with other Christian churches.

The members welcomed and commended the following for study:

ACC-17 members also approved a new Anglican Communion process for receiving ecumenical texts developed out of its dialogues with other Christian traditions.

The council heard from the Rev. John Gibaut, the communion’s director of unity, faith and order, who is leaving his post at the end of this meeting. His report touched on a variety of subjects, including the impact of ACC-16’s affirmation of the Joint Declaration on the Doctrine of Justification.

The declaration, originally agreed to by the Roman Catholic Church and the Lutheran World Federation in 1999, has been described as resolving the doctrinal dispute at the heart of the Reformation, i.e., whether Christians are saved by their works or by their faith alone. It states that the churches who agree to it now share “a common understanding of our justification by God’s grace through faith in Christ.”

The declaration has since been adopted or affirmed by the World Communion of Reformed Churches and the World Methodist Council as well as the ACC.

Gibaut acknowledged that, despite the attention the declaration earned in some circles, the fact that five Western Christian churches “have been able to say something together on the Doctrine of Justification” begged the question: So what? The answer to that question has begun to be discerned.

“My analogy is we now have a common master key to unlock so many of those locked doors from the 16th century. How do we use it together? How do we walk together more closely?” he said. “The Doctrine of Justification is not just a theological thing. It’s a vision of what it means to be a human being.”

Convening at the Gold Coast 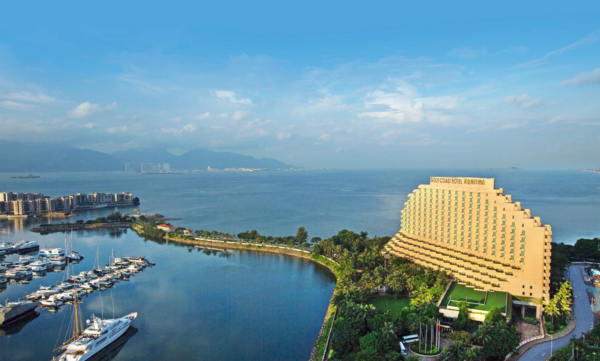 Most of the Anglican Consultative Council’s sessions are taking place at the Gold Coast Hotel, about 45 minutes from central Hong Kong. The venue is said to be more economical than a hotel in the main part of the city. Photo: Gold Coast Hotel

Whenever the Anglican Consultative Council gathers for its nearly triennial meetings, it convenes in a different place around the Anglican Communion. In the last 10 years, it has met in a hotel in Kingston, Jamaica, at Anglican cathedrals in Auckland, New Zealand, and Lusaka, Zambia, and now in the Gold Coast Hotel, about 45 minutes from central Hong Kong.

Some have raised eyebrows at the locale near popular Golden Beach, the sparkling environs of the hotel building – a modernistic wavy array of crystals hangs from the ceiling of the meeting room – and the sumptuous food both in the hotel and at two restaurants in the city that the council has visited thus far.

“You might, since you’ve arrived, have thought, ‘Why are we in such a luxurious hotel with the wonderful food that we’ve had, the wonderful bedrooms, frankly the chandeliers in every space?’” Anglican Communion Chief Operating Officer David White acknowledged on April 28 when he explained to the ACC members the choice of the Gold Coast. “You might be thinking this doesn’t feel as if this is something within the budget of the Anglican Consultative Council.”

White did not specify the cost of ACC-17, nor has that cost been disclosed elsewhere.

When the ACC last met in Hong Kong in 2002, it gathered at the YMCA building in the city center. However, since then, the price of land has skyrocketed in Hong Kong, and so has the cost of anything that sits on that land. Being so far away from central Hong Kong means the cost of the meeting is far less, White said.

The fact that the hotel owner is a Hong Kong Anglican who wanted to host the meeting was helpful as well, White added.

The ethos of hospitality and the generous hosts have magnified the sense of luxury. White said that in all the planning meetings, he tried to tamp down the number of choices for each meal. “I have completely failed to reduce the quality with which we will be served,” he said. “With no sense of guilt, with no sense of regret, enjoy facilities and enjoy the company and enjoy the hospitality during which we are here.”

Archbishop of Canterbury Justin Welby was asked at an April 27 news conference about the environmental cost of the meeting that brings 99 ACC members from all over the world, plus staff to support them. He noted that the last ACC meeting changed the council’s constitution to allow groups such as the communion’s Standing Committee to meet electronically.

Yet, he said, sometimes face-to-face meetings need to happen “because you can just do and say things that you can’t do in any other way.”

ACC-16’s Resolution 16.33 also called for the communion office to make carbon-offset payments to the Anglican Alliance, the communion’s relief and development agency, “in their efforts address the world refugee crisis and human suffering as a result of conflict and drought.”

In another change addressed to the meeting’s environmental impact, ACC-17 is largely paperless. All reports and resolutions are posted on a password-protected “microsite,” and members who do not have internet-ready devices have been loaned iPads.