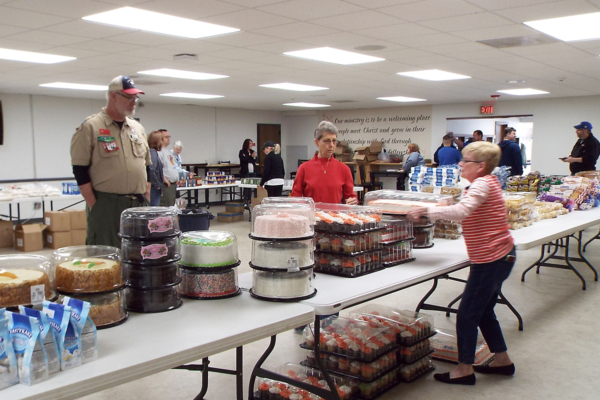 [Episcopal News Service] The catastrophic floods that hit Nebraska and neighboring states in March submerged whole neighborhoods underwater and turned some riverbend communities like Fremont into isolated outposts surrounded by water. The rising Platte and Elkhorn rivers blocked roads into and out of the Fremont area for days.

“Fremont was basically an island,” said the Rev. Sarah Miller, whose small congregation at St. James’ Episcopal Church has been on the front lines of relief and recovery efforts.

At the same time, the Missouri River swallowed parts of the Omaha suburb of Bellevue, Nebraska, particularly two rental home communities on the city’s south side. Hundreds of residents were displaced by the flooding. “That whole area was pretty well wiped clean,” the Rev. Tom Jones, rector of Church of the Holy Spirit, told Episcopal News Service.

This is looking South from Fremont on Highway 77. You can see the smoke from a trailer house that Fremont Fire and Fremont Rural are battling. pic.twitter.com/HS4xMuJXsS

The floodwaters have since subsided, and more than 5,000 Nebraskans have applied for federal assistance, according to the state. The federal disaster area includes dozens of counties throughout Nebraska and Iowa. Some displaced residents returned to find their homes and possessions destroyed by the floods, which were caused by an unusually snowy and wet winter.

The Episcopal Diocese of Nebraska, while partnering with Episcopal Relief & Development, has rallied its 52 congregations behind the flood victims and, in places like Fremont and Bellevue, provided direct support to the residents most effected by the disaster and its aftermath.

St. James’ began by filling tote bags with three days’ worth of toiletries and supplies for flood victims, a variation on its ministry of assembling similar donations for domestic violence victims. On April 11, the congregation resumed its regular community meals, and some residents displaced by the floods were among the 25 to 30 people who attended, Miller told ENS. 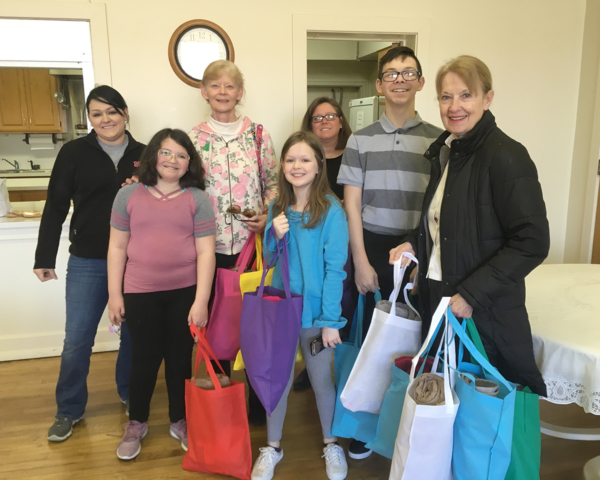 “We know that this can be an overwhelming time for people,” said Miller, the priest-in-charge at St. James’. Sunday services at the church typically draw about 25 worshippers.

Her disaster response includes providing pastoral care for struggling neighbors as they cope with their flood losses; she picks up on their cues when deciding how St. James’ will follow up next. “We’re really trying to listen to folks to figure out what’s needed and how we can possibly respond,” she said.

Some church members are dealing with emotional loss because the floods destroyed personal treasures, like family photos. Since others in the congregation have photos taken with the flood victims at past events, they have been encouraged to share the images, a step toward rebuilding lost photo albums.

The congregation at St. James’ also is considering a “laundry love” ministry to serve the increased number of neighbors who have been forced to use laundromats because their homes and appliances were damaged.

No Episcopal church facilities were seriously damaged by the flooding in Nebraska, according to the Diocese of Nebraska, though two families from Jones’ congregation in Bellevue were among those who were left homeless. At one point, the roofs of their mobile homes were barely visible above the rising Missouri River, Jones said. More than a month later, they have found permanent housing and are “very optimistic” about the future.

“The community really, really came together to provide all kinds of support for the people who were impacted,” said Jones, whose average Sunday attendance is about 100. He mentioned another parishioner who offered temporary shelter to a family whose basement had been flooded, and there have been many other examples of neighbors helping neighbors. “They really came together and met those immediate needs.”

His congregation also is among those getting a boost from the diocese’s work with Episcopal Relief & Development, which is providing logistical support in the relief and recovery phases. Episcopal Relief’s expertise comes from years of experience responding when natural disasters strike around the country, and this month it sent two representatives to Nebraska and Iowa “to help diocesan leaders conduct assessments of the damage caused by the flooding and to identify both immediate and long-term needs of communities,” the agency said in an online statement.

Episcopal Relief & Development is helping the dioceses pay for emergency supplies for residents, such as food, gas and clothing, and Church of the Holy Spirit will use a $2,000 grant from the agency paired with $1,000 from the Diocese of Nebraska to bolster the congregation’s food distribution ministry, which is several years old.

The Bellevue church, through its partnership with the Food Bank for the Heartland, had scheduled events every two months to distribute thousands of pounds of food from the Omaha-based food bank, typically serving 100 to 120 families. It now can increase the frequency of its food distribution to every month, filling a gap left by two other Bellevue churches that had decided before the flooding to stop holding distribution events.

The most recent distribution was April 27, and although the number of families hadn’t increased in the wake of the floods, Jones said he saw some new faces. He thinks the need will increase as other flood relief efforts phase out.

Nebraska Bishop Scott Barker applauded Episcopal Relief & Development for its support, and he praised the work of individual congregations and Episcopalians around his diocese.

“I’m proud of our ability to rally to serve,” he said in an interview with ENS. “It’s a difficult bit of work, because the damage is spread over such a giant geographical area but principally in isolated pockets. … We’re trying to be really prayerful and discerning about a long-term response.”

One long-term question is whether small communities in Nebraska will survive if most of the towns’ residents are told their homes are too badly damaged to return to them. Though survival isn’t in doubt for Fremont, a city of about 26,000 people northwest of Omaha, Miller said the smaller towns on Fremont’s outskirts face an uncertain future. If those residents choose to take the federal assistance and relocate elsewhere, “that place just basically disappears,” she said.

For those who stay to rebuild and repair, recovery won’t happen overnight.

“It’s setting in how long this is going to take,” Miller said. “I think people are feeling frustrated navigating the system, trying to figure out how the inspections work, how they get back into their homes, how to work with FEMA.”

But for those who didn’t lose everything, they are approaching a difficult future while still feeling “grateful and lucky,” she said. “There’s a sense from a lot of people that it could have been worse.”