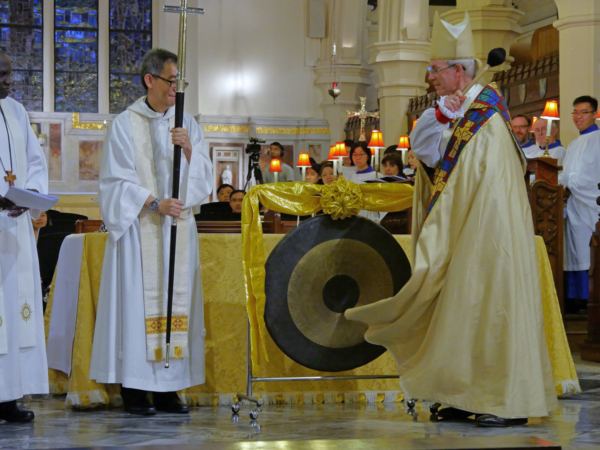 Near the end of the Eucharist, which took place at St. John’s Cathedral in the heart of the financial district here, Archbishop of Hong Kong and ACC Chair Paul Kwong told the congregation that Hong Kong means “Fragrant Harbor,” a name it took because of the spice trade in its early days.

Archbishop of Canterbury Justin Welby thanked God “that you have gathered your church from north and south, east and west.” He then vigorously struck a ceremonial gong three times and declared ACC-17 open in the name of the Trinity. A video clip of the gong ceremony is below.

St. John’s, which is celebrating its 170th anniversary this year, is the seat of Anglican Diocese of Hong Kong Island, one of three dioceses which, along with the Diocese of Eastern and Western Kowloon and the Missionary Area of Macau, form the Hong Kong Sheng Kung Hui, the Anglican province in Hong Kong. St. John’s is the oldest surviving Western ecclesiastical building in Hong Kong. During the Japanese occupation of Hong Kong from 1941 to 1945, the cathedral was converted into a club for the Japanese and stripped of many of its original fittings. 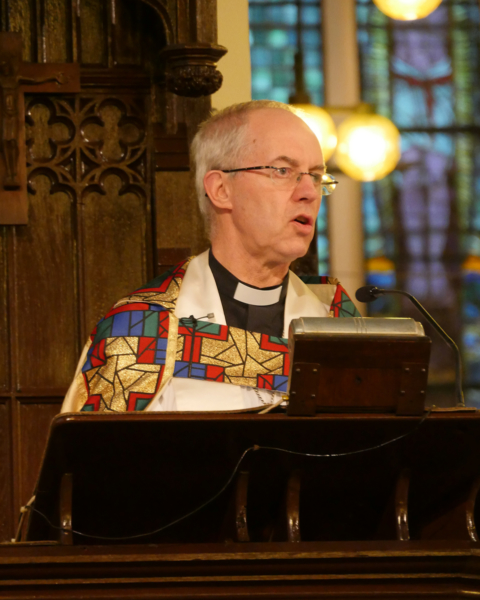 Anglicans must bring to others the peace that Christ has brought to them, Archbishop of Canterbury Justin Welby said April 28 in his sermon during the Eucharist opening the 17th meeting of the Anglican Consultative Council at St. John’s Cathedral in Hong Kong. Photo: Mary Frances Schjonberg/Episcopal News Service

During his sermon, Welby thanked the present-day victims of Christian persecution from around the Anglican Communion for “standing firm in your faith” and sharing it with others.

Speaking of the Easter Day terrorist bombings in Sri Lanka, the archbishop said, “That paradox of death all around, of the hands of violence seemingly triumphing, is as old as the promise of Jesus when he says to his disciples, ‘Peace be with you.’”

Anglican Communion Secretary General Josiah Idowu-Fearon, later leading the Prayers of the People, began by asking the congregation to stand for a moment of silence for the victims of those attacks.

Welby said that Anglicans and others are “called to support all those torn apart by persecution, by civil disorder and by war.” Support begins, he said, with praying for peace and receiving from God “much more than we can consume ourselves so it should overflow to the world around us,” forging people into peacemakers and reconcilers.

Welby called on the ACC members to pray “that we will be filled with wonder and peace,” rather than hiding behind barriers of prejudice. “For in doing so, we lose peace, we abandon our sisters and brothers, and we have nothing to which to witness,” he said.

That witness, which ACC-17 is pondering via an approach called “intentional discipleship,” happens easily and frequently in some parts of the communion, while elsewhere, Welby said, it is “rare, exceptional, even forgotten.” For example, he said, a Church of England survey found that only one-third of churchgoing parents thought it is important to pass on Christian faith to their children.

“Our families are our closest mission field,” he said.

Earlier in the day, a presidential address

As the council’s first business sessions got underway the morning of April 28, Welby said in his presidential address that the ACC meets “not for ourselves, but in God’s service.”

“The Anglican Communion does not exist for itself,” he said. “It exists primarily to serve God’s mission in God’s world.”

The ACC is “the most remarkably diverse group” in the communion, representing 2,000 different languages and a similar number of cultures, according to Welby. “The miracle of the communion is that, through the work of Jesus Christ, we are made one by the grace of God alone, not by our choice or by our selection,” he said.

Welby reminded the ACC that each of the communion’s 40 provinces and six extra-provincial bodies is both autonomous and interdependent.

“We know that what one of us does affects all of us. We have the autonomous right to make choices, province by province, to be present or to be absent,” he said. “Being interdependent means we should limit that right out of love for one another.”

Welby made clear in his address that the unity of the Anglican Communion will show the world how followers of Christ live, even when they disagree.

“We cannot condemn whole nations to the absence of help, neglect of support, solitary suffering through indulging in the luxury of disunity,” he said. Anglicans cannot neglect those harmed by war, forsake the poor and the persecuted, ignore climate change or fail to preach the Gospel with the intention of making disciples “because we think our issues are more important,” the archbishop said in the most animated part of his 20-minute speech.

Noting that while some countries know what it is to live in danger, Welby described a danger that he said is spreading across the world “in which the possibility of the breakdown of the rule-based order that has governed the world since 1945 looms large, and populism is rising across the Global North, with isolation in its wake.

“Climate change grows more and more dangerous for the whole planet – a true horseman of the apocalypse. It is in these times that the Anglican Communion has the potential not only to be a place of refuge and stability in the world, but a place of transformation, a place where self-interest is converted into service, where fear is transformed into faith and where enmity and injustice become the love and mercy of the Lord,” Welby said.

The Anglican Consultative Council is one of three Instruments of Communion, the others being the Lambeth Conference of Anglican bishops and the Primates Meeting. The archbishop of Canterbury (who is president of the ACC) is seen as the “Focus for Unity” for the three instruments. Because the ACC is made up of bishops, clergy and laypeople, it is the communion’s most representative body.

Of the 99 members present at ACC-17, 69 are male and 30 are female. More than half are new members. Fifty-six are ordained and 43 are lay. Of the 56 ordained members, nine are women.

That compares with the Primates Meeting, which has not had a female member since Bishop Katharine Jefferts Schori’s term as The Episcopal Church’s 26th presiding bishop ended in November 2015. Out of the 670 bishops who attended the last Lambeth Conference in 2008, 18 were female, compared to 11 in 1998. The 2020 Lambeth Conferences will see a major increase in that number, but the total will be less than 60.

Only Nigeria and Uganda did not send members to the ACC-17 meeting. The roster is here. 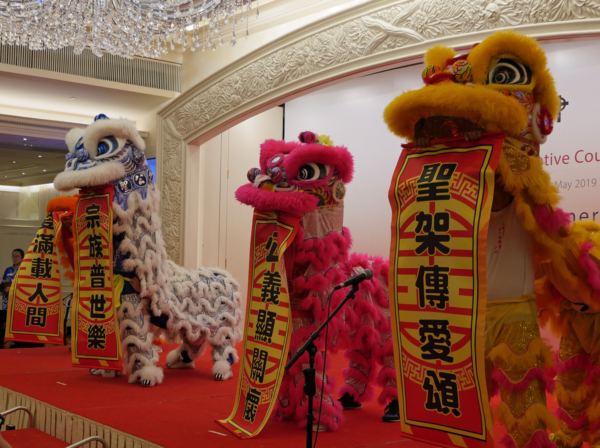 The Anglican Consultative Council, staff and clergy were welcomed by lion dancers from a number of Hong Kong schools and other organizations of the Hong Kong Sheng Kung Hui, the Anglican province in Hong Kong, during an April 28 dinner. Photo: Mary Frances Schjonberg/Episcopal News Service

The bulk of the meeting is taking place at the Gold Coast Hotel, about 45 minutes from central Hong Kong. The venue is said to be more economical than a hotel in the main part of the city.