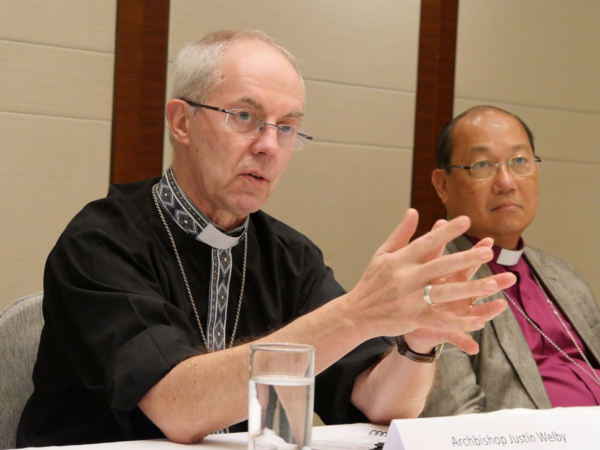 Welby told a news conference on April 27, in response to a question from Episcopal News Service, that the ACC is the only one of the Anglican Communion’s Instruments of Communion that is governed by English law. It is incorporated as “an English company with a charitable aim.” Via the ACC constitution, the trustees “very clearly specify what it can and cannot do,” he said.

“Doctrine is not one of the issues that it does,” Welby said of the council.

The ACC’s “object,” according to its constitution, is to “advance the Christian religion and in particular to promote the unity and purposes of the Churches of the Anglican Communion, in mission, evangelism, ecumenical relations, communication, administration and finance.” The constitution lists 30 specific powers of the ACC after making the general statement that “the council has the power to do anything which is calculated to further its Object(s) or is conducive or incidental to doing so.”

Welby said, “There will be an opportunity outside the conference for members of the conference to ask me questions” about any subject they would like, and he said, he has no doubt that Lambeth will come up. “And, that will be in a private session so people can express themselves freely and clearly, and express their disagreement, which is perfectly proper.”

He noted that the decision about whom to invite to the conference has been the sole prerogative of the archbishop of Canterbury since the first conference in 1867.

Formal discussion of the Lambeth Conference is currently on the agenda for the late morning of May 4 as one of three items in the 19th of the meeting’s 21 business sessions. Also on that session’s agenda are a discussion of ACC finance and organizational matters (carried over from the previous session) and the first of two times when the members will consider resolutions. The session is scheduled to last 75 minutes. The last meeting of the ACC saw passage of 45 resolutions, all of them on one up-or-down consent calendar vote.

Both The Episcopal Church’s Executive Council and House of Bishops, as well as a number of dioceses, have objected to the decision announced Feb. 15 in an Anglican Communion News Service blog by Anglican Communion Secretary General Josiah Idowu-Fearon.

Idowu-Fearon wrote that Welby had invited “every active bishop” to the periodic gathering of the Anglican Communion’s bishops set for July 23-Aug. 2, 2020. That decision represents a change from the previous Lambeth Conference. In 2008, then-Archbishop of Canterbury Rowan Williams refused to invite Bishop Gene Robinson, who in 2003 became the first openly gay and partnered bishop in the Anglican Communion.

However, Idowu-Fearon said in his blog post that “it would be inappropriate for same-sex spouses to be invited to the conference.” He said the Anglican Communion defines marriage as “the lifelong union of a man and a woman,” as codified in Resolution 1.10 of the 1998 Lambeth Conference.

Welby’s decision promoted push-back in Britain as well, including at the University of Kent in Canterbury, where most of the conference will take place, and among some members of the Houses of Parliament.

“It is worth noting that the controversy is not only one way,” Welby said, adding that he has received “a significant number of letters” objecting to his decision to invite bishops who are in same-sex marriages when none were invited in 2008. “That’s a point that is sometimes forgotten,” he said.

Diocese of New York Bishop Assistant Mary Glasspool currently is The Episcopal Church’s only actively serving bishop who has a same-sex spouse, Becki Sander. The Rev. Thomas Brown is due to be ordained and consecrated on June 22 as the next bishop of the Diocese of Maine. He is married to the Rev. Thomas Mousin.

When K.C. Wong of the Hong Kong Catholic Newspaper asked Welby if the issue of same-sex relationships is as pressing an issue now as it was when Robinson became a bishop is 2003, Welby replied “it depends on who you ask.” It is a pressing issue in North America and parts of Australia, he said.

“To be honest, in very large parts of the communion, it’s not an issue that registers very high,” Welby said. In those areas, people are faced with “issues of life or death,” he said, such as rising water levels in the South Pacific, expanding deserts in Africa, warfare and rape as a weapon of war in South Sudan and the Democratic Republic of Congo, and Christian persecution. 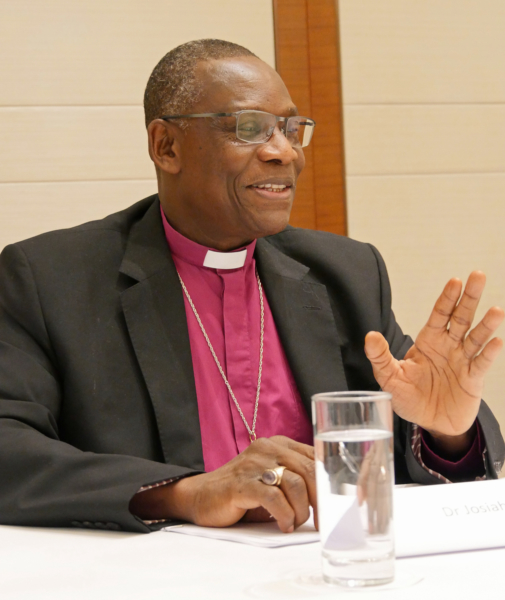 Anglican Communion Secretary General Josiah Idowu-Fearon said April 27 that many churches outside the Anglican Communion are wrestling with what he called “this problem” of same-sex relationships. Photo: Mary Frances Schjonberg/Episcopal News Service

When Idowu-Fearon replied that many churches outside the Anglican Communion are wrestling with what he called “this problem” of same-sex relationships, Welby cautioned against that characterization.

“It’s not an issue; it’s not a problem. It’s about people. When we’re dealing with people, we treat them as people made in the image of God and with the dignity of being in the image of God,” he said. “The first rule is these are people, and I think the most painful part for me of the decisions that have to be made is that I know at every moment that I write a letter or make a decision, that I’m making a decision about people and that there is no decision that will result in nobody getting hurt.”

His decision “hurt a lot of people,” Welby admitted, “but I would have hurt a huge number of people elsewhere in the communion” if he had decided differently.

“There wasn’t a nice solution,” which he rejected in favor of “the nasty solution,” he said. “It’s not as simple as that.”

Welby pointed out that on May 1 the ACC will suspend its work and members will be offered the option of attending a 90-minute “consultation” on Living in Love and Faith, the Church of England’s new effort to think theologically about diverse opinions on human identity and sexuality.

“It will, I hope, lead to significantly more careful listening to each other around the world,” he said.

Welby said the attendance-optional session requires the suspension of the council’s work because “it doesn’t fall within what the ACC can do.”