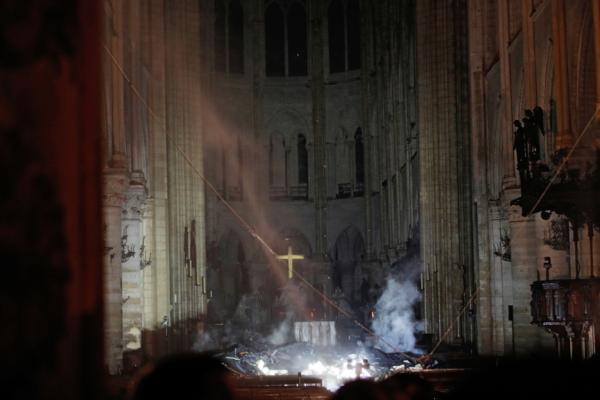 Smoke rises around the altar in front of the cross inside Notre Dame Cathedral in Paris as a fire continues to burn, April 16, 2019. Photo: Philippe Wojazer/REUTERS

[Episcopal News Service] While the world watched in stunned disbelief as Notre Dame Cathedral went up in flames April 15, many people, including Episcopalians, took to social media to post photos of their visits to the iconic church and offer prayers for the people of Paris.

Presiding Bishop Michael Curry joined with the Very Rev. Lucinda Laird, dean of the American Cathedral in Paris, and Convocation of Episcopal Churches in Europe Bishop in Charge Mark D.W. Edington, to offer “our sincere condolences and our readiness to offer any hospitality that would be of help to the community and congregation of Notre Dame in this most holy season of the faith we share.”

The three said that members of the Episcopal cathedral – located about three miles up the Seine from Notre Dame – “send our prayers in this week that ends in what we know to be the sure and certain promise of resurrection for the future life and restoration of this monument of Christian faith.”

Notre Dame, the most famous of the world’s medieval Gothic cathedrals, was begun in 1163 on the Île de la Cité in the Seine and was considered finished in 1350. It rose on the site of two earlier churches. Prior to those churches, the site held a Gallo-Roman temple dedicated to Jupiter. Some of the Roman ruin can still be seen below the cathedral. About 13 million people visit the Roman Catholic cathedral each year.

In New York, members of the Cathedral Church of St. John the Divine must have watched news broadcasts from Paris with a special sympathy. A fire in the cathedral’s crypt broke out a day earlier, on the morning of April 14, Palm Sunday, sending smoke into the 124-foot-high stone nave and forcing the evacuation of about 100 people. The fire began after the 9 a.m. service had ended. The 11 a.m. service was moved outside, as was the Sunday soup kitchen.

The Rt. Rev. Clifton Daniel, dean of the cathedral, told Episcopal News Service that the fire started in an art storage room and was contained to that space. About three-quarters of the art was saved, but the fire destroyed a valuable icon and a 16th-century chair, as well as some prints, drawings and carvings, he said. He credited the New York Fire Department’s prompt response for keeping the damage to far less than it could have been.

The cathedral was open on April 15, but because of ongoing cleanup, public tours were cancelled, as were the three services scheduled for Holy Monday (Eucharist plus Morning and Evening Prayer).

“My first thought, even though I wasn’t here, was oh, God, it’s just like the fire in 2001 here at the cathedral,” said Daniel, recalling his reaction to hearing about the Notre Dame disaster. (Daniel first came to the cathedral in March 2017 as interim dean.)

It was a week before Christmas Eve in 2001 when the six-alarm fire burned through the timbered roof trusses, which caved in, destroying the north transept, he said. The 2001 fire also severely damaged the Great Organ and two of the cathedral’s Life of Christ Barberini tapestries. Sections of the cathedral were closed until 2008 for cleaning and restoration.

“My second thought was oh, the trauma, the trauma. It will take years to recover from the trauma. You will recover, but it will take time,” Daniel said. “And then I thought, those poor people, all that suffering, all that history, all that hope. It’s going to be a tough time.”

Daniel said some people asked him if the two fires this week were a sign. He told them they showed “we’re in a season of dying and rising.”

Flames may have destroyed art at St. John the Divine and a large part of Notre Dame, “but, you know what, we rise again,” he said, noting that the 2001 fire left the cathedral “a little bit scarred” but still at work among the people of New York.

“I feel confident that Notre Dame will be repaired, restored, renewed and will go on about its mission,” Daniel said, adding that along with the hard work that will be required in the coming years comes “an opportunity for renewal and strength to move ahead.”

At Washington National Cathedral, a place that has known the impact of disaster since an August 2011 magnitude 5.8 earthquake caused tens of millions of dollars of damage, Dean Randy Hollerith expressed solidarity with another cathedral in what he called “a small sisterhood of globally recognizable Gothic cathedrals.”

Evensong at the cathedral on April 15 included a prayer for Notre Dame and a copy of the prayer was placed in the church’s St. John’s Chapel for those who wanted to light a candle for the church community in Paris.

“Our hearts are breaking for their loss, but we know that this great cathedral has touched and inspired millions of people around the world, and that impact can never be destroyed,” Hollerith said.

The Rev. Broderick Greer, canon precentor at St. John’s Cathedral in Denver, wrote a prayer for Notre Dame, which the cathedral offered on its Facebook page “from one cathedral to another.”

The Rev. Vicki Geer McGrath was among the many Episcopalians who posted their prayers and reflections on Facebook. She told parishioners at All Saints’ Episcopal Church in Millington, New Jersey, where she is the rector, that buildings do not make a church; however, “a place that is built to hold and inspire the faith and prayers of believers, and to contain the hopes and aspirations of all men and women, becomes a vessel and vehicle of holiness, no matter how simple or how grand.”

McGrath wrote that she was moved by people – “their faith and hope on very public display” – who gathered in the streets of Paris, praying and singing hymns as they watched Notre Dame burn.

Acknowledging the increasing secularization of Europe and the United States, she suggested that it is time for all Christians “to pray earnestly and daily for the renewal of our faith in Christ and for new life for the church” and “each one of us will be inspired and directed to be God’s agents in a new flowering of faith and life in Christ.”