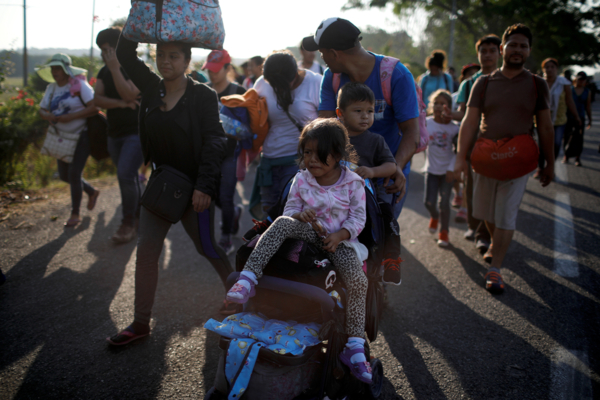 People belonging to a caravan of migrants from Honduras en route to the United States walk on a road as they leave Tapachula, Mexico, April 15, 2019. Photo: Jose Cabezas/REUTERS

[Episcopal News Service] A month and a half ago, asylum-seekers arriving in Nogales, Mexico, faced a three-week wait for an initial interview to enter the United States legally. More recently, those wait times have more than doubled, putting a strain on humanitarian relief efforts.

“The biggest challenge is the wait time. … It’s up to eight weeks now, and we need to keep collecting monetary donations to feed these people,” said the Rev. Rodger Babnew, a deacon at St. Andrew’s Episcopal Church just across the border in Nogales, Arizona.

Like other Episcopalians living along the southwest border – which stretches more than 1,550 miles from Brownsville, Texas, to San Diego, California – Babnew’s ministry has turned toward meeting the humanitarian needs of asylum-seekers. Through an ecumenical partnership with the United Church of Christ and the Evangelical Lutheran Church, Babnew coordinates the Diocese of Arizona’s border ministry, which includes a 600-person capacity shelter system (including two homes set aside for people quarantined with chickenpox and measles) in Mexico, where asylum-seekers receive a place to sleep, food, medical attention, clothing and transportation assistance.

Asylum-seekers began arriving at the U.S.-Mexico border in caravans last fall, many of them attempting to cross through Tijuana to San Diego. Since that time, asylum-seekers increasingly have moved east along the border, to crossing points in Arizona, New Mexico and Texas.

By definition, asylum-seekers are fleeing violence or persecution in their homeland and seeking sanctuary elsewhere. When asylum-seekers arrive at the U.S.-Mexico border, typically they are given a number that guarantees their place in line for what’s called a “credible fear” interview.

If credible fear is established, asylum-seekers are given an electronic bracelet and released from U.S. custody, the majority reuniting with family members already in the United States while they await a formal asylum hearing. Wait times for court hearings now can last up to two years.

U.S. Immigration and Customs Enforcement agents might release asylum-seekers onto the streets and at bus stations, as the government does not provide humanitarian assistance. This is where faith-based and other nonprofit organizations come in, supplying asylum-seekers with shelter, food, medical care, clothing and assistance booking travel arrangements so they can reunite with sponsors, typically family members throughout the country who pay for the bus or plane tickets and offer support during the long wait for a formal hearing. Increasingly, as trust has grown, border agents cooperate with faith-based and other humanitarian groups and release asylum seekers into their care, said Babnew, at least in Nogales, Arizona.

Unlike in El Paso, Texas, where asylum-seekers crossing through Ciudad Juárez, Mexico, have been held in fenced-in areas under bridges while waiting for credible fear interviews, things have gone more smoothly in Nogales, a small 20,000-population city an hour’s drive south of Tucson.

“We don’t have that, we don’t have people sleeping on the border or standing in line,” said Babnew, in a telephone interview with Episcopal News Service.

At the current rate of 100,000 “migrants” attempting to cross the border monthly, 1 million will have entered over a 12-month period. Asylum-seekers and migrants are not one in the same; the latter is someone who typically moves temporarily for work or other reasons.

“Each asylum-seeker who enters the United States and expresses fear of return or declares an intention to seek asylum is granted an interview with a trained U.S. Citizenship and Immigration Services (USCIS) asylum officer,” said Lacy Broemel, The Episcopal Church’s refugee and immigration policy adviser, in an email message to ENS. “This interview, which is aimed at determining whether the asylum-seeker has a ‘credible fear’ is the first step in the asylum process. If [asylum-seekers are] found to have a credible fear of returning home, they are legally entitled to be able to apply for asylum and present their case to an immigration judge.”

In recent years, asylum-seekers increasingly have joined the flow of migrants seeking economic security in the United States. Many of them are fleeing gang- and drug-related violence in Central America’s Northern Triangle, a region that includes El Salvador, Guatemala and Honduras. More than 700,000 people have been forcibly displaced by violence in the Northern Triangle. (Forcible displacement is a global phenomenon affecting a record 68.5 million people worldwide.)

“Rates of violent death in El Salvador, Honduras and Guatemala are some of the highest in the world and comparable with those of other armed conflicts internationally,” wrote Noah Bullock, executive director of Cristosal, in response to a New York Times’ editorial that called for building up Central America, rather than building a border wall.

“The optics of death and destruction in the region differ from those of traditional armed conflicts, yet the humanitarian consequences are acute; people are tortured, raped, disappeared, killed; families torn apart, livelihoods and property are destroyed,” he wrote.

Cristosal is a San Salvador, El Salvador-based human rights organizations with longstanding ties to The Episcopal Church. Because of its early work addressing forced displacement, the organization receives funding from USAID and has expanded its operations into Guatemala and Honduras.

For a better understanding of the violence females face in Central America’s Northern Triangle read ‘Someone is Always Trying to Kill You’ in the New York Times.

In late March, President Donald Trump announced his administration would cut $1 billion in designated aid to El Salvador, Guatemala and Honduras. The aid funds programs like those developed by Cristosal that address poverty, gang violence, security and drug trafficking. Some lawmakers criticized the president’s decision, saying the aid cuts would only worsen the situation on the ground.

In February, Trump declared a national emergency to build a border wall, citing an invasion at the southern border. More recently, the president declared: “Our country is full” and called the U.S. asylum system a “scam.”

Trump made curtailing immigration a centerpiece of his 2016 campaign and, since taking office, has issued executive orders and has supported policies and legislation to cut legal immigration.

“As we have seen over the past two years, the administration is creating chaos at our southern border in order to advance harmful policies like long-term detention of children and disregarding guaranteed rights of asylum-seekers. The Episcopal Church believes that families, children, and individuals seeking protection should not be condemned as creating a national emergency or crisis, but rather should be recognized as children of God who deserve to be treated with fairness and dignity,” said Broemel, who works for the church’s Washington, D.C.-based Office of Government Relations.

“There are strategies and solutions to process asylum-seekers in a safe and orderly manner, to address the situations forcing these persons to flee in the first place, and to ensure that the U.S. is maintaining its moral and legal obligations when it comes to asylum-seekers,” she said. “The Episcopal Church has official policies passed by General Convention that urge the administration to employ such strategies as increasing aid to Central America, employing alternatives to detention, modernizing our ports of entry, and hiring child welfare professionals to assist with the children and families at the border.”

On April 4, The Episcopal Church joined the National Immigrant Justice Center and other human and civil rights and faith-based organizations in issuing a framework to address the “crisis” at the border. The framework “describes steps the U.S. government must take to uphold U.S. and international law, and basic human rights, in a region that has been increasingly destabilized by the president’s anti-immigrant agenda.”

The Episcopal Church, through General Convention and Executive Council resolutions, has a long history of supporting refugees, asylum-seekers and migrants. During the 79th General Convention, the church strengthened its stance on immigration.

In November 2018, the Episcopal Diocese of Rio Grande, whose geographical territory includes 40 percent of the southwest border, hosted a summit that brought together people engaged in borderland ministry to share experiences and practices.

This network of Episcopal borderland ministries has led to increased cooperation across the Southwest. For instance, when immigration agents in the Rio Grande region told Babnew they intended to release 1,500 asylum-seekers over a three-day period, he called Rio Grande Bishop Michael Hunn, and together they found shelter space for everyone.

The Rio Grande diocese also has responded to humanitarian need in El Paso and in Las Cruces and Albuquerque, New Mexico, where St. Michael and All Angels Episcopal Church recently helped 55 asylum-seekers over a four-day period. When the asylum-seekers were released from U.S. custody, the church provided them with beds, shelter, food and medical care and helped arrange transportation to reunite them with family members.

In El Paso, the Rev. Justin Gibson, vicar of St. Francis on the Hill Episcopal Church, issued a call on April 3 for baby formula, some of it for new mothers unable to produce breast milk to feed their babies.

“Formula – that’s a sign of how desperate the situation is,” said Hunn. “Women are under such stressful conditions that they are not lactating; we reached a different level of humanitarian need.”