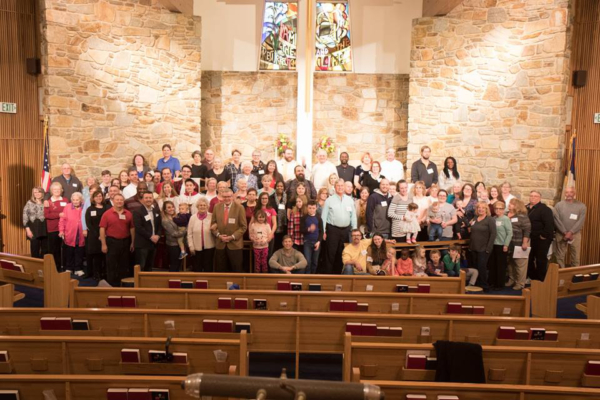 Parishioners of the Churches of the Holy Apostles & St. Stephen gather for the first time March 3 in the home of their partnered congregation in Arbutus, Maryland. Photo: Diocese of Maryland

[Episcopal News Service] Communion at 901 Courtney Road in Arbutus, Maryland, looks a bit different from Communion at most Episcopal congregations. Worshippers choose between wine and grape juice, with the option of drinking out of small individual cups instead of the common cup.

The Episcopal Church of the Holy Apostles hasn’t quite merged with St. Stephen Lutheran Church, but on March 3, through a cost-saving partnership between the two struggling congregations, they began worshipping together in the same building and sharing the leadership of the Rev. Jim Perra, an Episcopal priest who now serves as both rector of Holy Apostles and pastor of St. Stephen. 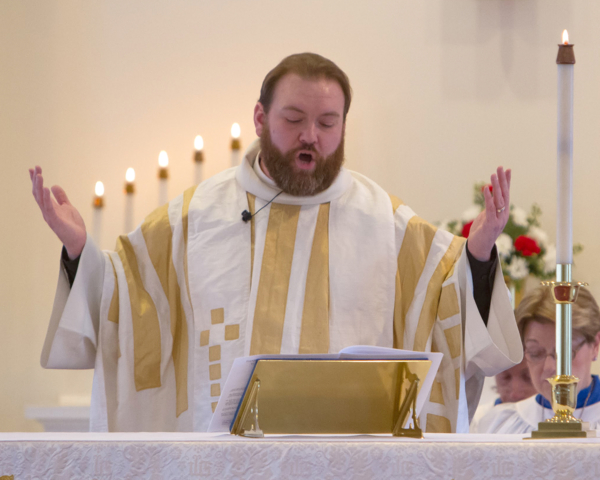 The Rev. Jim Perra presides March 3 at the last service in the former Church of the Holy Apostles in Arbutus, Maryland. The congregation now worships at a nearby Lutheran church through a partnership with that congregation. Photo: Diocese of Maryland

“It shows the faithfulness of the people in these two congregations that they had less interest in a comfortable death … than they did in doing hard and sacrificial things,” Perra told Episcopal News Service by phone. His expanded congregation now calls itself the Churches of the Holy Apostles & St. Stephen.

With The Episcopal Church and the Evangelical Lutheran Church in America, or ELCA, in full communion with each other since 2001, these kinds of partnerships, though still rare, are growing more common around the country for a variety of reasons, including in places like Arbutus where two congregations see sharing worship space and clergy as a difficult but fruitful path to continued viability.

“There’s no one way this happens,” said the Rev. Margaret Rose, ecumenical and interreligious deputy to The Episcopal Church’s presiding bishop, and she added that these partnerships aren’t solely motivated by an interest in financial survival.

“That’s, I really think, the important thing,” Rose told ENS. “It’s about uncovering or revealing the unity of the church.”

Rose referenced part of the Book of Common Prayer’s Eucharistic Prayer D: “Remember, Lord, your one holy catholic and apostolic Church, redeemed by the blood of your Christ. Reveal its unity, guard its faith, and preserve it in peace.”

“What Maryland has discovered is how joyful that is,” Rose said, “much to their surprise.”

The Churches of the Holy Apostles & St. Stephen benefited from a successful “Lutherpalian” model close by in Baltimore, where the Church of the Nativity and Holy Comforter has nurtured the two Christian traditions under one roof since 2015. At Nativity and Holy Comforter, the two congregations took their partnership a step further and formerly merged into one, overcoming an array of logistical challenges. 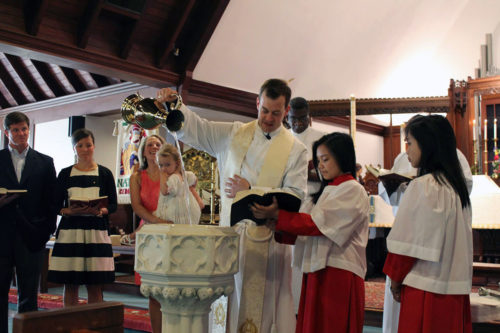 The Rev. Stewart Lucas celebrates Holy Baptism at the Church of the Nativity and Holy Comforter in Baltimore.

The Rev. Stewart Lucas, the Episcopal priest who leads Nativity and Holy Comforter, said his congregation decided early on that it didn’t want administrative duplication – the committees, the bank accounts, the insurance policies, the tax IDs – to hinder the congregation’s higher focus on mission and ministry. And the congregation chose not to split its Sunday Eucharist into distinctly Episcopal and Lutheran services. They preferred worshipping together.

“We want to sing with a hundred instead of 50 people,” Lucas said.

He now offers guidance to other congregations considering similar partnerships, and he advised Perra on the process at Holy Apostles & St. Stephen. “We’re kind of cheerleaders for them because we think the church is about people and not the buildings,” Lucas said.

Those sentiments were echoed by Maryland Bishop Eugene Sutton. “The church is not distinct along congregational and denominational lines,” Sutton said in an emailed statement. “We’re all in this together. All of us. Visionary leadership such as that demonstrated by Jim Perra and Stewart Lucas leads the way for the people of the congregation to see the possibilities, praise, joy and happiness inherent in partnering.”

The Maryland congregations are just two of about 65 Episcopal-Lutheran partnerships of various kinds across the country, such as Epiphany Lutheran-Episcopal Church in Valdez, Alaska, and All Saints in Big Sky, Montana, both of which ENS profiled in 2016 for a series on the 15th anniversary of Called to Common Mission.

That 2001 full communion agreement between The Episcopal Church and the ECLA, which allowed Episcopal clergy to preside at Lutheran services and Lutheran clergy at Episcopal services, acknowledged the theological common ground between two denominations and their shared Christian roots. It also opened the door for Episcopal and Lutheran congregations to pursue blended worshipping communities.

Ecumenism “is about revealing that unity God intended from the very beginning,” Rose said, but it doesn’t require elimination of differences. “Our unity is not about uniformity.”

That spirit guides the partnership at Holy Apostles & St. Stephen in Arbutus. “Who knows what the future will hold, but we’re interested in what it would mean to have an Episcopal and Lutheran church that celebrates the two traditions with a degree of specificity,” Perra said.

Before the partnership, Holy Apostles’ Sunday services were only drawing about 50 people, Perra said. The numbers were about the same at St. Stephen. Each congregation began taking a sobering look at the future, and each concluded it could not survive for long with revenue failing to match expenses.

“We could count the death of both congregations within a decade,” said Perra, who joined Holy Apostles as rector in 2014.

Perra’s counterpart at St. Stephen, the Rev. John Sabatelli, was looking to retire as pastor, but his Lutheran congregation hadn’t found a pastor to replace him. After discussions between the two congregations, church leaders proposed giving Perra the dual role of rector and pastor, and the blended congregation would worship at the St. Stephen church. 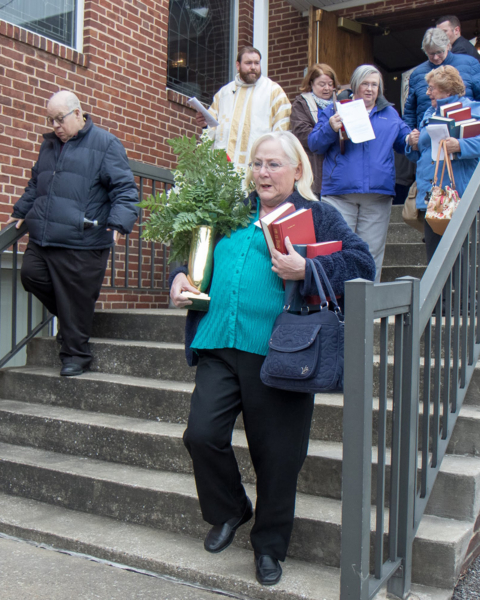 Holy Apostles parishioners carry items from their old church building as they make their way to their new home at St. Stephen on March 3.

That plan, with the approval and support of both churches’ bishops, gained momentum last summer with a trial clergy swap: When Perra went on vacation, Sabatelli presided that Sunday at Holy Apostles – and took his Lutheran congregation with him to worship at the Episcopal church. And Perra took his congregation with him to worship at St. Stephen when he covered for Sabatelli’s vacation.

From there, the partnership came together rather quickly, “by the standards of two mainline Protestant traditions, where things move at a glacial pace,” Perra said.

On March 3, to celebrate finalizing the partnership, the two congregations began their Sunday worship service at Holy Apostles. After Communion, they said a prayer of thanks for that church space. They collected items from Holy Apostles and carried them in a procession of about a mile to the worship space at St. Stephen. There, they dressed the altar and concluded the service.

That has been home base ever since. 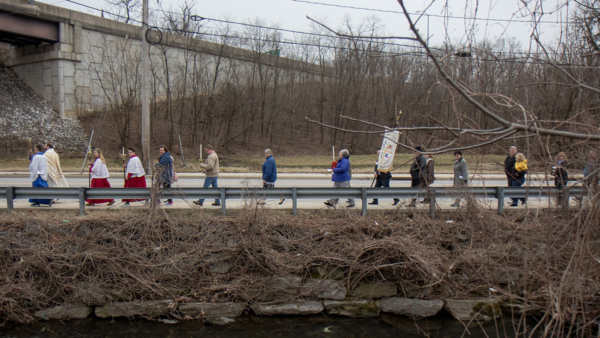 Parishioners of the Churches of the Holy Apostles & St. Stephen walk in a procession March 3 from the former Holy Apostles church to their new combined worship space at St. Stephen. Photo: Diocese of Maryland

“This is not something I’d ever thought I’d be party to,” Perra said, but he sees a newfound energy in his combined worshipping community as it commits itself to thriving, not just surviving.

The blended congregation will keep both church properties, since the former Holy Apostles facility remains an active site for community meetings, and several Burmese congregations rent the former Episcopal church for their worship services.

With Holy Apostles & St. Stephen’s typical Sunday attendance now reaching about 100, the two congregations haven’t really lost any members in the transition, Perra said, though some might feel more comfortable taking a Sunday off now and then because they don’t fear their church is at the verge of folding in their absence.

As for denominational distinctions, Episcopalians still can attend a spoken service from the Book of Common Prayer at 8 a.m., but few of them do. Most parishioners attend a hybrid service with singing at 10 a.m., which Perra calls “the big show.”

Both traditions are reflected at the Churches of the Holy Apostles & St. Stephen, though Perra admits his Episcopal training still leaves him with a learning curve as a new Lutheran pastor. “I’m in the process of being Lutheran enough for my Lutherans,” he said.