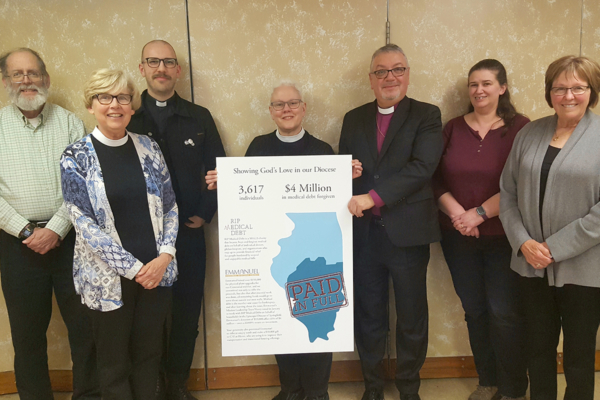 [Episcopal News Service] Last year, parishioners at Emmanuel Memorial Episcopal Church in Champaign, Illinois, took stock of the results of a centennial capital campaign. They had a good problem on their hands: Building renovations, funded. Local charities, supported. And they still had a $15,000 surplus.

That $15,000 may not seem like a lot, but with the help of a New York-based charity called RIP Medical Debt, Emmanuel Memorial leveraged the surplus to help wipe away unpaid doctors’ bills for 3,617 cash-strapped households across the Diocese of Springfield.

This Lent, forgiveness – sealed in bright yellow envelopes – also is arriving in thousands of mailboxes across central and southern Illinois. RIP Medical Debt began sending the envelopes last week to notify recipients that their medical bills have been eliminated thanks to Emmanuel Memorial’s intervention.

RIP Medical Debt uses the money it raises from donors like Emmanuel Memorial to purchase bundled financial portfolios of medical debt, which it then eliminates. The organization’s website describes debt forgiveness as “a collective message of care from and for the communities we serve.”

News outlets in central Illinois have asked anyone receiving one of the envelopes to come forward and share their stories, Maynard said. The church doesn’t have any of the recipients’ names because their identities are shielded by medical privacy protections, but Maynard, too, would love to learn more about the lives affected by the debt forgiveness.

Families struggling under the weight of medical debt “might be facing a crippling situation,” she said, even if they aren’t the usual recipients of the congregation’s typical outreach efforts, which include a sack lunch ministry for homeless people.

She wasn’t able to say how the congregation first learned about RIP Medical Debt, but the seeds of this outreach were planted 100 years ago, when the church was built from a design by Ralph Adams Cram, the renowned Episcopal church architect who died in 1942. Cram churches are more common in the Northeast than the Midwest, Maynard said, so the congregation, with about 200 member households, takes special pride in its historic building. Therefore, they had no problem raising $150,000 for a capital campaign in 2017 and 2018 to celebrate the church’s centennial.

Most of that money went toward minor building repairs and new signs, and the congregation set aside some of the proceeds for the local charities C-U at Home, a homelessness ministry, and Empty Tomb, which connects volunteers with families in need.

With the remaining $15,000, RIP Medical Debt initially estimated that the congregation could help forgive about $1 million in debt, Maynard said. The charity, by negotiating down the price of the debt, estimates that it usually can forgive about $100 in debt for every dollar donated. Think of it as the altruistic cousin of a debt collection agency, tearing up IOUs instead of asking for payment.

On a large scale, eliminating medical debt could have a profound effect on the lives of millions of American families. A recent report in the American Journal of Public Health found that medical expenses were a factor in nearly 60 percent of bankruptcy filings, and RIP Medical Debt estimates more than 43 million Americans have a total of about $75 billion in past-due medical debt. Another report, out April 2, indicates Americans borrowed $88 billion last year to pay for health care.

Emmanuel Memorial’s Mission Leadership Team voted in January to work with RIP Medical Debt to spend the money remaining from the congregation’s capital campaign to eliminate medical bills for households in Champaign County.

The charity quickly identified 201 individual debt accounts in the county and still had plenty of money left over, so the congregation expanded its geographic target to include the whole Diocese of Springfield. By the time Emmanuel Memorial’s donation was exhausted, RIP Medical Debt had purchased $4 million worth of medical debt, and it prepared to fill its bright yellow envelopes with the good news. 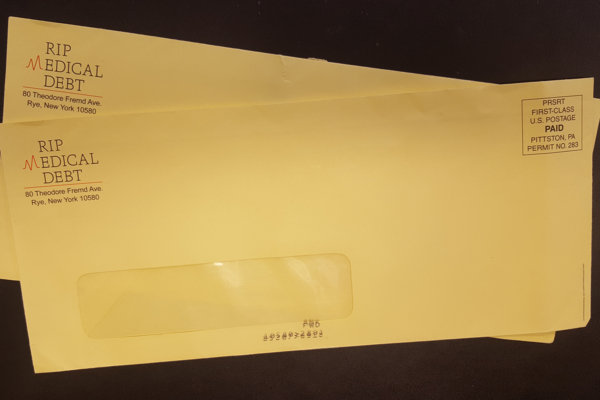 RIP Medical Debt sends notices to the people it helps in bright yellow envelopes like these. Photo: Beth Maynard

Credit agencies were notified that the 3,617 families’ debt had been cleared, and according to RIP Medical Debt, debt forgiveness does not increase the recipients’ taxes or result in any other adverse consequences. There are no strings attached, nothing expected in return.

“I applaud Emmanuel Memorial Episcopal Church for their dedication in realizing this important campaign,” RIP Medical Debt co-founder Jerry Ashton said in a church news release. “We feel incredibly privileged to work with any faith-based organization committed to relieving the burden of un-payable medical debt in its community.”

Springfield Bishop Dan Martins was at Emmanuel Memorial on March 31 for a previously scheduled visit, and he, too, praised the congregation’s work for residents across the diocese.

“I am overjoyed with the news of Emmanuel’s exemplary stewardship of the resources entrusted to them,” Martins said in the church’s news release. “The knowledge of the concrete impact this will have on families in central and southern Illinois is a sign of the abundant goodness of the God whom we worship.”

Even small donations go a long way, Maynard told ENS, and she encouraged other congregations to consider partnering with RIP Medical Debt.

“You can make a tremendous impact with a very small donation,” she said. “It’s a terrific way to make a difference.”