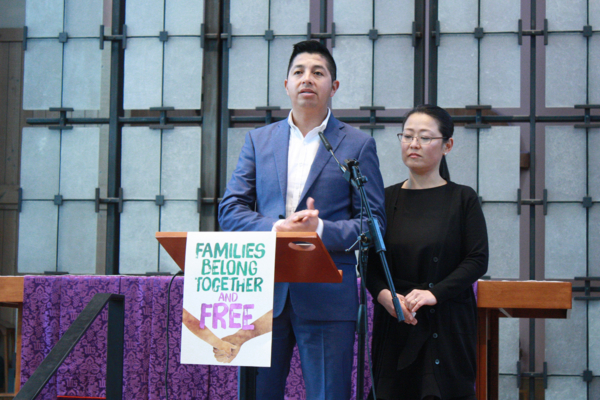 Jaime Rubio Sulficio and Keiko Maruyama speak at a news conference March 29 at St. Mark’s Episcopal Cathedral in Seattle. Rubio is staying at the cathedral to avoid deportation to his native Mexico. Photo: Magaly Smith/One America

[Episcopal News Service] The Episcopal cathedral in Seattle began last week providing sanctuary for a Mexican man who faces deportation and fears he will be separated from his wife and 6-year-old son, both American citizens.

Immigrant advocates introduced Jaime Rubio Sulficio to the public at a March 29 news conference hosted by St. Mark’s Episcopal Cathedral, where he now is living. Two days later, he and his family were welcomed warmly by the congregation at the cathedral’s Sunday services.

“The church gave them a standing ovation of over a minute yesterday as a sign of encouragement and support,” the Very Rev. Steven Thomason, St. Mark’s dean, told Episcopal News Service in an April 1 interview. “It took great courage for them to become public in all of this, but they’re convinced that it’s the right thing to do. And this church is convinced it’s the right thing to do.”

Rubio, 37, supports his family with his construction business and has been active in the Seattle community. At the news conference, he described teaching Latin dance and volunteering with the United Way of King County and Rebuilding Together Seattle. He also alluded to the uncertain future facing an estimated 11 million undocumented immigrants in the United States.

“I am so grateful for the support of the community,” he said with his wife, Keiko Maruyama, standing by his side. “This is not just about me and my family. This is about the more than 11 million people facing injustice in the United States trying to find a humane solution for their immigration status.”

St. Mark’s noted in a news release that nearly 50 people are seeking sanctuary with U.S. congregations; it’s unclear how many are Episcopal churches. Churches are considered “sensitive locations” that traditionally are not targeted for immigration enforcement. In one case, at St. Barnabas’ Episcopal Church in Greensboro, North Carolina, the congregation has for nearly two years provided refuge for a Guatemalan woman ordered to return home.

St. Mark’s is part of an interreligious network of Seattle region congregations that have pledged to support immigrants. The cathedral also sees itself as part of the larger cause. With roots in the 1980s sanctuary movement that offered refuge to Central Americans fleeing war, the new sanctuary movement has been growing in recent years in response to rising animosity toward immigrants and the anti-immigration policies of the Trump administration.

Most recently, President Donald Trump has threatened to close the U.S.-Mexico border to all migration in response to what he says is Mexico’s failure to stop the flow of undocumented immigrants to the U.S. On March 30, the U.S. government cut aid to El Salvador, Guatemala and Honduras, the three Central American countries from which most migrants are fleeing.

Episcopal congregations churchwide have voiced support for immigrants facing deportation, in some cases offering them physical sanctuary, and The Episcopal Church’s General Convention has backed those efforts. The latest resolution, from 2018, called on congregations to “become places of welcome, refuge, healing, and other forms of material and pastoral support for those targeted for deportation due to immigration status or some perceived status of difference.” The resolution defined “sanctuary” broadly, not just as physical protection from deportation.

In Seattle, the ecumenical Church Council of Greater Seattle enlisted 150 congregations in a network called For Such a Time as This to be advocates for immigrants. Since 2016, it has trained volunteers to provide pastoral care after immigration raids, and network volunteers accompany immigrants to legal hearings and provide hospitality to those seeking asylum in the U.S.

“Faith communities are called to alleviate suffering and remove fear and confront unjust policies, so we are very straightforward in executing our mission as people of faith,” Michael Ramos, executive director of the Church Council of Greater Seattle, told ENS. St. Mark’s was one of 11 member congregations that additionally pledged to become places of sanctuary, including by sheltering immigrants if the congregations have the capacity to do so.

Another Seattle church, Gethsemane Lutheran Church, was the first to offer physical sanctuary to an undocumented immigrant facing deportation. Jose Robles, a 43-year-old painter from Mexico, has been living at Gethsemane for nine months while his request for a visa is being reviewed.

“Sanctuary is not an easy thing for families or an individual to go through, because no one wants to be even temporarily out of their home or unable to work or support their families,” Ramos said. Congregations, too, need to spend ample time in discernment before deciding “consciously, fully and actively” whether to open that door, he said.

At St. Mark’s, the congregation’s discernment on sanctuary culminated in 2016 with a unanimous vestry vote in favor of preparing the congregation for it, if and when requested.

In its “Statement of Commitment and Action,” which covers a range of justice and peace issues, the congregation committed to “advocate for immigrants and their families, and we will block, interfere, and obstruct the mass deportations of immigrants who are members of our communities.”

The statement was approved before President Donald Trump took office in 2017, though Thomason, the cathedral’s dean, identified a greater sense of urgency now – based not on the number of deportations, which the latest data shows hasn’t spiked under Trump, but rather on concerns that increasingly toxic rhetoric is being aimed at immigrants and influencing government policies.

“We absolutely are outraged by the current policies and actions of our government that is separating families,” Thomason said. Such an approach to immigration is “immoral,” he said, “and runs against all of this nation’s values and certainly is counter to our [baptismal] covenantal value of respecting the dignity of every human being.”

He wasn’t sure St. Mark’s ever would need to provide such sanctuary, but then Ramos’ group presented Rubio’s case.

Rubio entered the United States illegally more than a dozen years ago and returned to Mexico in 2010 to visit his sick mother. He was later caught by federal authorities while trying to re-enter, said Ramos. Until recently, U.S. Immigration and Customs Enforcement, or ICE, had granted Rubio a stay of deportation, allowing him to remain in the country without legalizing his residency status, but authorities withdrew that protection late last year and gave him 120 days to leave.

“I am not unsympathetic to the emotional and financial hardships associated with this case,” ICE acting Seattle field office director Bryan Wilcox said in a Seattle Times story, but Wilcox saw no “urgent humanitarian” reason to allow Rubio to continue living in the United States.

Details on what motivated ICE to end Rubio’s stay of deportation weren’t readily available. In general, a Trump administration policy change shifted immigration authorities away from prioritizing deportation of certain categories of undocumented immigrants, such as criminals.

“Since President Trump’s 2017 executive order that largely removed prosecutorial discretion, we have seen an increase in deportations of immigrants who are not a threat to their communities and in fact are critical members of their communities and have families and longstanding ties to their employers and faith groups,” Lacy Broemel, a policy adviser with The Episcopal Church’s Office of Government Relations, said in an email responding generally to the policy that has resulted in cases like Rubio’s.

“This policy has had a real and painful effect on family units and individuals. A solution is to advance comprehensive immigration reform so these individuals have a chance to come forward and earn a pathway to citizenship,” Broemel said.

Rubio’s departure deadline expired March 28. Instead of leaving the country, he moved into the cathedral.

“He was not a member of our congregation, but he is now a member of our family,” said the Rev. Nancy Ross, canon for cathedral relations. Ross criticized “arbitrary” immigration enforcement that targets someone like Rubio.

“We’re standing our ground as the church that follows Jesus Christ and that stands with the oppressed and opens our doors for the vulnerable,” she told ENS, “and we feel it a moral obligation for keeping families together.”

Rubio, at the news conference, described the joy he felt seeing his son in a kindergarten performance. Those tender moments will be out of reach for him now at the cathedral, but he will still be able to receive visits from his wife and son.

“My family are hopeful for a positive solution,” he said, “and we are going to continue fighting to get a legal remedy so we can stay together as a family.”