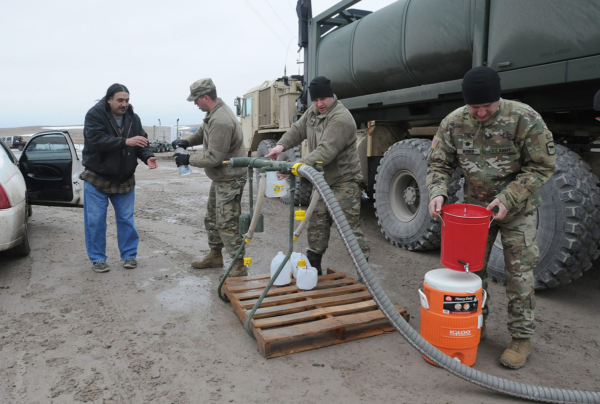 “These are devastating floods. Some of them are equal to 100-year floods for us, and it simply has to do with snow and then melt with rain and then a massive blizzard of heavy spring snow, which is very wet, as opposed to our normal [winter] drier snow. There’s just no place for the water to go on frozen ground,” the Rev. Lauren Stanley, superintending presbyter of the western portion of The Episcopal Church’s mission on the Rosebud Sioux Indian Reservation, told Episcopal News Service March 26 in a telephone interview. “We’re all trying to pull together to help each other, and that’s the best part.”

The Rev. Edward Hunt, Stanley’s neighbor to the west on the Pine Ridge Reservation, told ENS March 26 that while flooding on the Pine Ridge has garnered national and international attention, “we don’t have nearly as bad a situation as she does.” The further east one goes from the Pine Ridge, “that’s where the real problems lie,” he said.

Still, Hunt and Stanley, who is reluctantly confined to her home to recuperate from Achilles tendon surgery, are coordinating aid to residents on each reservation.

The day before he talked to ENS, Hunt helped a family that attends St. Julia’s Episcopal Church in Porcupine, South Dakota, buy gas for their car and their neighbors’ cars. He also helped the family buy food for their seven or eight neighbors. The family will “go door to door and just ration it out – that’s what they do,” Hunt said.

Using money from his discretionary fund, Hunt has been buying food for people and gas for their cars “so they can at least eat and take care of their communities.”

Hunt officiated at a burial service in the town of Pine Ridge just before he telephoned ENS. “People are generally very calm. They’re not panicked. They’re sorry that this has happened to their neighbors, but there isn’t a sense of unease or desperation,” he said.

Saying “forgive my disrespect in this context,” Hunt explained that “they don’t have a whole lot to lose, so they’re not really panicked about losing anything because there isn’t much there.”

According to some accounts, 97% of the reservation’s population lives far below the U.S. federal poverty line.

Because of that poverty, residents of Pine Ridge always live on the edge; just one more thing can start what Hunt called “a domino effect.”

That lack of access is due to roads covered with water or washed out and impassable. The same is true on the Rosebud Reservation.

Meanwhile, access to potable water has become a problem.

Stanley also has been organizing food for volunteers who are filling sandbags to keep the waters at bay. She said the manager of the local Buche Food, a grocery store, agreed to donate water and Gatorade when she and the Rosebud Episcopal Mission bought bread, cold cuts, cheese and chips. Stanley and another Episcopalian set up a sandwich-making assembly line at Stanley’s house in Mission, South Dakota, and volunteers delivered the simple lunches to the sandbagging areas.

People are also going to need propane, which they use for heating and cooking. Helping them is “a little bit of a complicated thing and a lot of money,” especially if the floodwater damaged their tank equipment, Stanley said. The Rosebud Episcopal Mission (West) already has a program to help people who have trouble paying for propane, and Stanley will use the relationship with the local supplier, Country Pride Cooperative, which was recently bought by CHS Inc., to help the 10 flood-stricken people she and the supplier know of so far. “That’s going to run somewhere between $1,400 and $2,400” for the gas itself and any replacement equipment, she said.

The five-year-old program typically buys about $13,000-$14,000 worth of propane for elders and families every year, she said, in addition to the mission’s project that supplies firewood to folks in need.

“And the firewood program at the moment is shut down because there’s no dry wood,” Stanley added.

She’s also trying to coordinate local volunteers who want to help. “We’ve had a lot of people with ties to The Episcopal Church who ask what they can do, and I kind of try to deploy [them] and then get the word out” about what kind of help is needed where, she said.

For instance, Whitney Jones, a local rancher who also is a school social worker, has been filling and transporting sandbags on his flatbed truck. He is the grandson of Bishop Harold Jones, a Lakota man who was a bishop suffragan in South Dakota and the first American Indian to be elevated to the office of bishop by any Christian denomination.

Whitney Jones’ effort is part of a major sandbagging effort by all sorts of people on both reservations.

Stanley has been publicizing the needs of the Rosebud Reservation and the work that Episcopalians are already doing. “We’re getting a good response, and that’s the power of social media, as always,” she said.

Hunt said he, too, has had inquiries from Episcopalians around the church about how they can help. His first response is, “Do not send clothing or food or stuff like that; send a check, send it to the Diocese of South Dakota, contribute to Episcopal Relief and Development.” Or, he said, give it to the discretionary funds of priests who minister on reservations “so that we on the ground who are best able to assess the needs of the people can most effectively respond.”

In addition to real-time assessment of needs, both Hunt and Stanley said that being able to spend money locally helps the hard-hit region.

Episcopal Relief & Development said March 27 that it is helping the Diocese of South Dakota provide emergency supplies such as gas cards, groceries, and propane to those impacted by the flooding, which has exacerbated long-standing issues. “Many churches in this area have strong community relationships and connections to local businesses, allowing them to meet the needs of their neighbors rapidly by increasing the scale of existing ministries when disaster strikes,” the organization’s statement said.

Hunt hopes people won’t just send a check and then think there isn’t more they can do. “I want them to keep the people on the reservation – not only in South Dakota, but North Dakota, Minnesota, Montana, Wyoming, wherever – in their prayers all the time because there are crises here which do not have to do with the weather.

“That’s what I really need help with. I need some kind of support. We all do. We need not just the injection shot of relief and then, pull the needle out, we’re done. We need like a constant [prayer] presence here, which would help a great deal.”

Things could get worse before they get better, the National Oceanic and Atmospheric Administration said last week.

“Episcopal Relief & Development continues to be in contact with our partners, not only in South Dakota, but throughout the affected regions, as they determine the needs of their communities,” Tamara Plummer, program officer for the organization, said in the March 27 update. “The disaster is ongoing, and these supplies are just the beginning. Traditional spring flood season is still a month away, so we are preparing for whatever needs may come.”