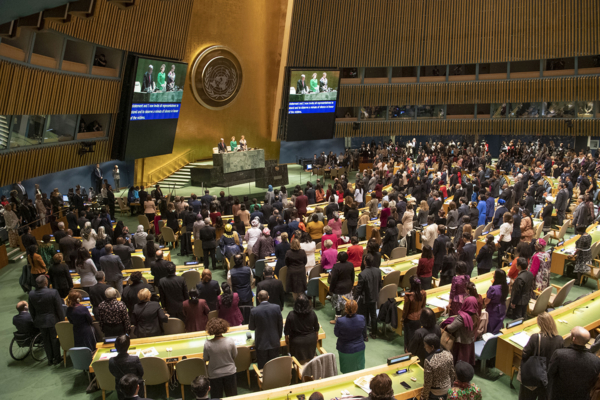 Participants at the March 11 opening meeting of the 63rd United Nations Commission on the Status of Women observed a moment of silence for those who lost their lives the day before in the crash of Ethiopian Airlines Flight 302. Photo: Evan Schneider/UN

[Episcopal News Service – New York] As interesting as the official United Nations Commission on the Status of Women events can be, often it’s the off-site events that generate more fascinating insights and discussions – if not the realization that things aren’t always as they seem.

“U.N. agencies and member states do a good job of presenting the data they’d like you to receive. … Those stats can be manipulated,” said Sam Hynes, a UNCSW delegate from South Dakota. “Things can sound good, but once you know the real story, things sound different, and that’s where our advocacy comes in.”

The 63rd session of the UNCSW met March 11-22 and focused on social protection systems, access to public services, and sustainable infrastructure for gender equality and the empowerment of women and girls. Some 9,000 women and men – including Anglicans and Episcopalians – representing all regions worldwide attended the annual event held at U.N. headquarters in midtown Manhattan, making the UNCSW one of the largest gatherings promoting women’s rights and interests in the world.

“This 63rd session of UNCSW might seem like only a two-week event, but it actually builds on the hard work and action of previous generations of Anglicans and Episcopalians striving for gender equality and empowerment for women and girls,” said Lynnaia Main, who represents The Episcopal Church at the United Nations and coordinates and leads the Episcopal delegation.

“The wisdom and training of our forerunners – including former directors of the Office of Women’s Ministries and Anglican Women’s Empowerment – is essential to the intergenerational dialogue and institutional knowledge of our participants,” she said. “The networking and knowledge sharing from year to year helps us build relationships of support to sustain us for the long haul. We really need that, since the U.N. Secretary General estimates that it will be a 217-year marathon to achieve gender equality. So, whether or not one participates formally in any given session of UNCSW, we are all able to be part of the historical dialogue and change needed to empower women and girls and aim for gender justice.”

Off-site, or side events addressed everything from building safe and empowering digital spaces for women and girls to a global perspective on sexual harassment in the workplace to closing the gender pay gap to economic empowerment to effective responses to modern-day slavery and human trafficking, including sex trafficking.

For instance, Hynes said, when sex workers were given the microphone during an off-site panel about sex work, a discussion about decriminalization led to insights concerning decreases in violence, lower rates of sexually transmitted diseases and fewer incidences of sex trafficking.

“Decriminalization of sex work and getting them [sex workers] involved can have a positive influence on [eliminating] sex trafficking,” said Hynes, who volunteered while in graduate school with a nongovernmental organization advocating for sex workers in Vietnam.

Decriminalization, she added, keeps sex work on the surface and “can decrease rates of STDs and HIV and eliminate violence,” whereas criminalization can lead to increases in violence against women.

Delegates learned that New Zealand is the only country to have totally decriminalized sex work; in Sweden, it’s the johns, or men who buy sex, who are punished, which has had the negative consequence of driving sex work underground; and in places like the Netherlands, where women sell themselves in Amsterdam’s red light district, women, especially those who come from Eastern Europe, the Balkans and Africa, can feel like men have put a price on them just as the women in the windows are priced.

Established in 1946, the UNCSW is the primary intergovernmental agency dedicated to the promotion of gender equality and the empowerment of women. Although The Episcopal Church has had a presence at the UNCSW since 2000, it has sent a delegation to official UNCSW proceedings only since 2014, when it gained consultative status with the U.N. Economic and Social Council.

On March 17, Anglican and Episcopal delegates gathered at the Cathedral Church of St. John the Divine for evensong. For a list of Episcopal delegates and staff representing Presiding Bishop Michael Curry click here, and click here for the Anglican Communion delegation. A closing Eucharist was held March 22 in The Episcopal Church’s Chapel of Christ the Lord.

The 63rd UNCSW precedes the 25th anniversary of the Beijing Declaration and Platform for Action, which laid out an agenda for women’s empowerment; it was adopted in September 1995 during the Fourth World Conference on Women.

The worldwide tilt toward conservative, nationalistic governments and the backlash to the #MeToo movement loomed large during this year’s conference, with delegates, including Episcopalians, expressing fear that a fifth world conference and a potential revision of the Beijing Declaration could chip away at some of the gains women have made over the past 25 years.

Still, there’s a long way to go, as Cynthia Wilson D’Alimonte, who represented the Convocation of Episcopal Churches in Europe as its first-ever UNCSW delegate, learned. D’Alimonte was drawn to panels and discussions about the challenges widowed women face in the developing world where their choices and rights are still limited, marriage is sometimes forced, and property ownership laws, in some cases, still don’t apply to women.

“Their destiny is not in their hands all by decree of country and culture,” she said.

During the 63rd UNCSW, there was some debate over the definition of “family” as it was presented in the draft of the agreed conclusions, which is the final document produced by the conference.

Since the Universal Declaration of Human Rights, the family has been described as the fundamental unit of society; however, that doesn’t always have a positive connotation.

“When very male-dominated, patriarchal societies think about the family, they think about it as a private space as opposed to a public space,” said Chiseche Mibenge, who represented the Diocese of California and who teaches human rights at Stanford University.

“And the private spaces, they swear a social worker, a police officer, a court of law will not enter into. When, in general, we talk about the right to privacy, it’s a very male-centric … do not enter my house, government, and we know that women and children can be extremely vulnerable in their homes,” she said. “When I ask my students in the classroom when is the first time you experienced gender discrimination, they say, ‘in my house.’”

For Dana Jean, a delegate from the Diocese of Dallas who directs outreach ministry for St. Andrew’s Episcopal Church in McKinney, Texas, the UNCSW got her thinking about how she can better engage members of her church in advocacy. Her church, a Jubilee Ministry, she said, is strong in outreach and service, but advocacy offers room for growth.

Michele Roberts, a first-time Episcopal delegate from Delaware and Washington, D.C., and a long-time fighter of environmental racism, hoped to use the language around the U.N. Sustainable Development Goals in her advocacy at the local, state and federal levels.

On the eve of the UNCSW’s close, a still-energized Hynes said she could have kept going.

“All the women who represent NGOs and their passion for advocacy … I feel like I could do it forever. It’s been invigorating in a way I’ve not felt in a while,” she said.

Even before returning home to South Dakota, Hynes already had reached out to the priest at her church in Pierre and members of the local chapter of an international women’s empowerment organization she belongs to about what actions can be taken to combat sex trafficking around big events like Sturgis, a massive annual motorcycle rally held in her state, and annual hunting seasons.

As members of the church, she’s asking the question, “What can we do?”

To that end, Hynes and others are supported by official policy.

The Episcopal Church has a long history of addressing both labor and sex trafficking; during the 79th General Convention last July in Austin, Texas, the church recommitted its support for the Code of Conduct for the Protection of Children from Sexual Exploitation in Travel and Tourism.