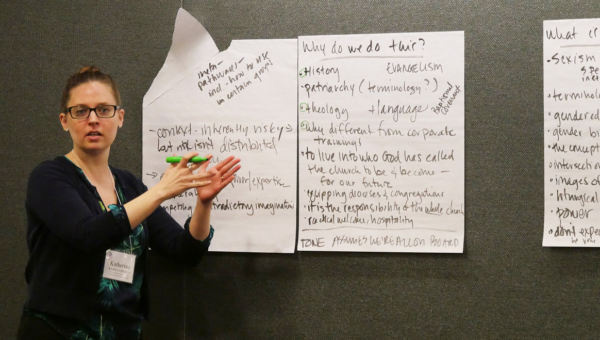 Katherine Karr-Cornejo of the Diocese of Spokane helps her colleagues on the Task Force to Study Sexism in TEC & Develop Anti-Sexism Training sort through some of the work the group did earlier in the meeting. Photo: Mary Frances Schjonberg/Episcopal News Service

[Episcopal News Service – Rosemont, Illinois] If General Convention sets the direction for the work of The Episcopal Church every three years, it is the so-called “interim bodies” that actually do that work, and five of them gathered here March 19-22 to begin their triennial efforts.

“You’re doing a lot of work having to do with some internal matters that will strengthen us for ministry and mission beyond ourselves,” the Rev. Gay Clark Jennings, House of Deputies president, told task force members via a video greeting. “You will help us all be better disciples, better able to live, as the presiding bishop says, ‘in the Way of Love,’ so that we can bring that to the entire world.”

The anti-sexism task force and the one tasked with developing model anti-sexual harassment policies are not the only ones formed by General Convention in July to address sexual harassment, abuse, sexism, inequality and discrimination in The Episcopal Church. A third, the Task Force on Women, Truth and Reconciliation met in mid-November when a number of other interim bodies gathered for their initial meetings.

During the meetings this week, the two task forces began to set the scope of their work and to determine where those efforts would overlap and where they would have specific distinctions. The task force assigned to study sexism and develop anti-sexism training materials began by discussing the theological and cultural aspects of why the church ought to do such work. The task force also outlined ways to define sexism, including where and how it happens and whom it affects. The group tasked with developing model anti-harassment policies also plans a training component, and the two task forces agreed to coordinate their work whenever possible. 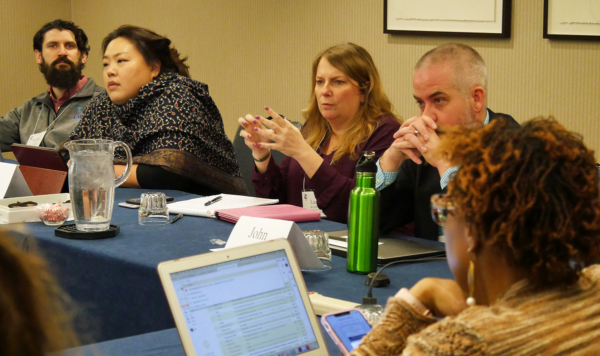 “The biggest challenge is this is something that’s never been done before and no diocese is doing it,” Laura Russell, who chairs the Task Force to Study Sexism in TEC & Develop Anti-Sexism Training, told Episcopal News Service in an interview.

The anti-sexism task force’s early thinking about training centered on developing a set of modules that could be used in a specific order by many groups and incorporated in their routine meetings and other gatherings, rather than requiring a large group of people to come to an all-day or multiday training.

“The idea being it’s not going to be: come together Friday afternoon, leave Saturday and be done with it and check off a box,” Russell said.

Northwest Texas Bishop J. Scott Mayer said he feels “the magnitude” of the work given to the task force, whose members, representing a “cross section of knowledge” from across the church, can meet the challenge.

Russell said that the #MeToo movement pointed to behavior, labeled it as sexism and exposed its prevalence. General Convention’s response to the movement was aimed at showing that sexism is prevalent in the church, too.

The task force developing model anti-sexual harassment policies is considering a mix of online work, as well as training that involves “personal interaction” because “we feel this is a relationship issue,” Cookie Cantwell of the Diocese of East Carolina explained when the two task forces met together.

And, rather than have training that seems like “almost a punishment thing where you have to go,” Cantwell said the group wants “it to be something that makes us whole and healthy and that people truly will feel the desire to go and learn.” 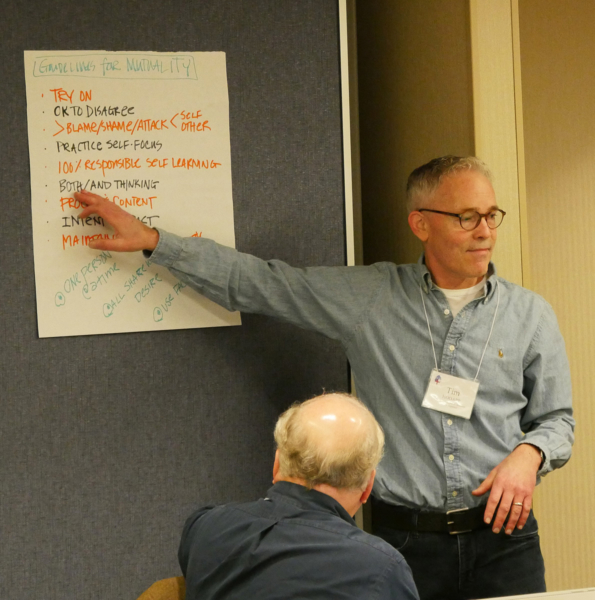 The Rev. Tim Hodapp of the Diocese of Connecticut leads the other members of the Task Force on Formation & Ministry of the Baptized through a discussion. Photo: Mary Frances Schjonberg/Episcopal News Service

The Task Force on Theological Education Networking and the Task Force on Formation & Ministry of the Baptized also found places where they could work together. The Rev. Maureen-Elizabeth Hagen, chair of Theological Education Networking, said during a joint meeting of the two that the networking task force wants to be sure it is not duplicating or contradicting the work of the formation task force.

Lisa Kimball, chair of the formation task force, agreed. “We want to maintain a dynamic and healthy alignment such that what we produce comes to the wider church [and] to General Convention in particular as a common front,” she said. “We are co-creating something that together will have a stronger impact than it would if we worked separately.”

The two groups may soon have “some kind of common theological statement, some kind of common rationale that captures the priority of baptismal identity and baptismal formation for all of us and honors the formation of all orders, the diversities of context and the realities of our world, our church and demographics.”

Then, Kimball said, the two groups could work out of that statement according to their own mandates from convention. She said she saw the networking task force as being charged with “bringing people out of silos” of different types and methods of theological education and “deepening the quality of those processes for people so that there’s more mutual accountability for how we’re forming people theologically for leadership.”

That work, she said, builds on the work of the formation task force, “which is primarily about the call of baptismal living in people’s lives.” Its mandate calls on members to identify or develop resources “for the forming of Christian life, but not just in the church, in daily life,” Kimball said. 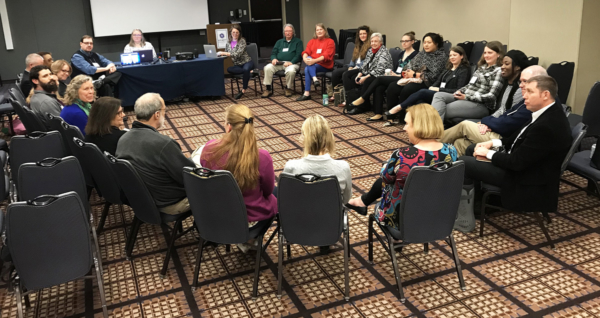 Dividing up the work between General Conventions

There are currently 65 interim bodies. Interim bodies are any task force, board or committee created to do specific work as requested by General Convention. Most will sunset at the next meeting of convention in 2021 in Baltimore. The types and numbers of interim bodies have fluctuated since 2015, when General Convention sought to dramatically reduce the number of long-term policymaking bodies, known as standing commissions.

In 2018, General Convention passed resolutions calling for close to 40 groups to do the work that had been done by the eliminated commissions, as well as new work for which newly created task forces were needed. Thus, the total number of interim bodies has actually increased this triennium. They are listed here. Presiding Bishop Michael Curry and Jennings, who appoint people to serve on all the triennial groups, combined some convention task force requests with similar or related mandates.

More than 1,200 volunteers from around The Episcopal Church applied to serve on the interim bodies, and Curry and Jennings appointed 612 people.

The Rev. Michael Barlowe told ENS the church is “blessed with the enormous talent and commitment at every level of the church, but I’m particularly grateful to theses faithful leaders who have given so much of themselves for churchwide leadership this triennium.”