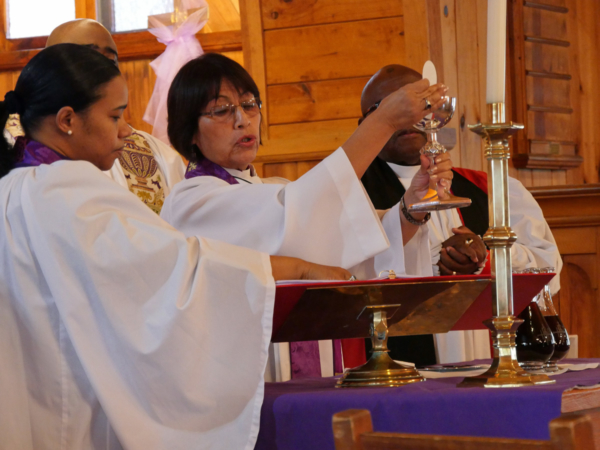 Diocese of Cuba Bishop Griselda Delgado del Carpio, center, presides at Eucharist March 13 in the Chapel of the Transfiguration at Kanuga Conference and Retreat Center on the second day of the House of Bishops meeting. Photo: Mary Frances Schjonberg/Episcopal News Service

[Episcopal News Service – Hendersonville, North Carolina] Two bishops from other churches, the Church of England and the African Methodist Episcopal Church, helped The Episcopal Church’s House of Bishops expand its view of the Way of Love on March 13. 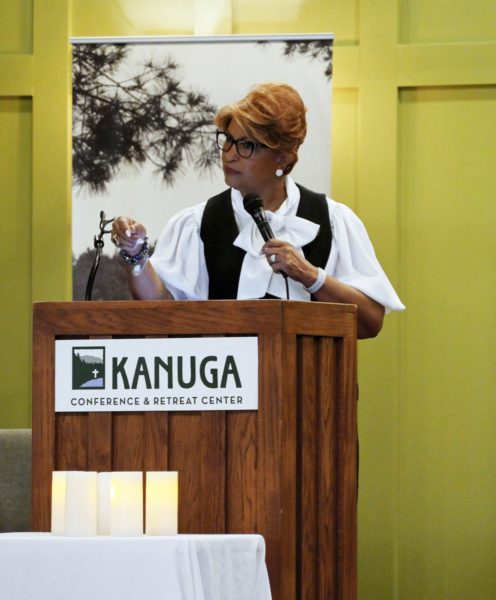 “The church at its best is the whatever-it-takes church” and must be “more prophetic than programmatic,” African Methodist Episcopal Bishop Vashti Murphy McKenzie tells the House of Bishops March 13. Photo: Mary Frances Schjonberg/Episcopal News Service

African Methodist Episcopal Bishop Vashti Murphy McKenzie, the denomination’s first woman bishop, and Church of England Bishop Ric Thorpe, a church planter who is now the bishop of Islington, both spoke to the House of Bishops.

Presiding Bishop Michael Curry set up the meeting’s theme on March 12, saying the Way of Love is a return to Christianity’s roots. “We didn’t make anything new,” he said. “We went back to the treasure chest.”

McKenzie, who has known Curry since his time at St. James’ Episcopal Church in Baltimore, told the house that the Way of Love is “a message that will resonate with people who are hurting in a very disgruntled world.” She urged the bishops to work hard on how they would incorporate the Way of Love into their own lives “because, guess what, if you don’t get it here, it’ll be hard for you to translate it outside of this room.”

Both the culture and the context of church have changed in the 21st century, she said, and what worked in the past does not work now; however, too many churches just do the same old things, maybe with a different name, and hope it brings different results. The church, McKenzie said, has to be “more prophetic that programmatic” and should not be content “to preside over attrition.”

Attracting “servants to the prophetic pipeline” will not happen if “we are more in love with the church than we are with Jesus Christ,” she said. It will not happen through marketing campaigns, new technologies, social media, “your hip-hop gospel liturgy, the buildings, programs and exclusivity.”

“It will only be by the power and the presence of the Holy Spirit,” McKenzie said.

The church needs to be “reminded that the church at her best is the whatever-it-takes church. It is a church that is open to the new leadings of the Holy Spirit. It’s open to the possibilities of the future. It doesn’t settle for good-enough. It keeps asking itself, ‘Is better possible?’ Sometimes, it is a church where biblical priorities are chosen over methods and traditions,” she said.

Thorpe, of the Church of England, told the bishops the story of his conversion experience, which led him to become an evangelist and church planter. As the bishop of Islington, he supports the Diocese of London’s goal of creating 100 new worshipping communities within the diocese by 2020. 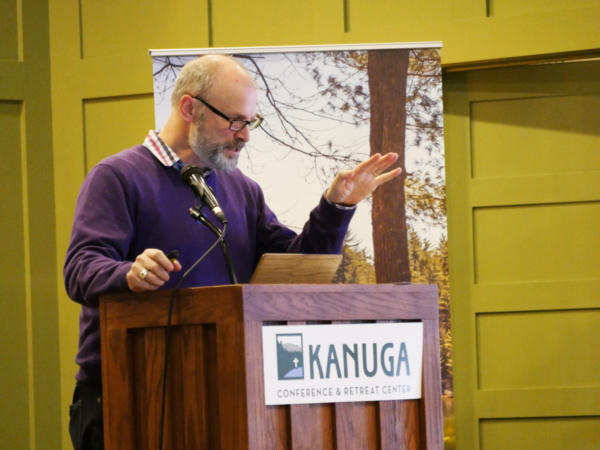 The essence of church planting is about making disciples and teaching them to make disciples of others, Bishop of Islington Ric Thorpe of the Church of England tells the House of Bishops. Photo: Mary Frances Schjonberg/Episcopal News Service

Clergy and all church leaders need to repent, saying “we have lost our way; we’ve lost our passion for the Gospel,” Thorpe said. They need to admit to Jesus that “we’ve tried lots of stuff and it just doesn’t work and we need something different.”

Church planters and those who hope to revitalize existing churches must honor the past, navigate change in the present and look to the future, all while making space for innovative ideas about how to be the church in their contexts. “We need to encourage each other to think differently” and take risks, Thorpe said, “even if you don’t know what the outcome is going to be.”

In terms of risk, evangelists need to have a loose hold on their traditions and be willing to “go down in flames, not just be comfortable,” he said.

The essence of church planting, Thorpe said, is about making disciples. If God is love and people are created in God’s image, then people must love God and love their neighbor, in part by sharing the news about God’s loving intentions. New disciples also need to be encouraged to make more disciples and be given the tools to do that, Thorpe said.

Denominations need to look at whom the church is not reaching and then be strategic about how to connect with those people. “The incarnation is about going to where people are, rather than waiting for people to come to you,” he said.

“That’s when you get culture change” in a denomination, Thorpe said. Widespread adoption of the principles of the Way of Love, having it become the way the church works, he added, could mean a major change in the culture of The Episcopal Church. 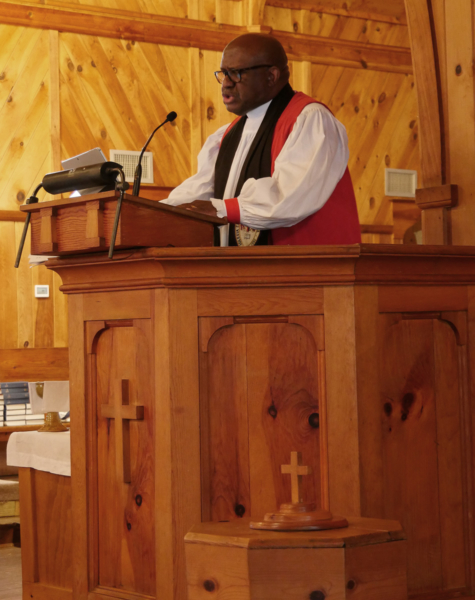 The Episcopal Church needs to truly commit to evangelism, rather than fight about sex, money and power, Honduras Bishop Lloyd Allen says during his sermon March 13 in the Kanuga chapel. Photo: Mary Frances Schjonberg/Episcopal News Service

During a panel discussion with McKenzie and Thorpe, Curry said he worries about the danger of evangelists inviting people into an abstract relationship with Jesus, rather than into a relationship with the Jesus of the Gospel, whose example Christians are called to emulate in their lives.

Following “Abstract Jesus,” Curry said, can “easily merge into the cultural notions of Jesus, which is not what I am talking about.”

Curry said that conversations about church decline sometimes create a pit in his stomach. He added that he has realized that “somewhere in my career, the goal of my ministry is to increase the number of people in church, increase the dollars in church, and do things that model success in every other venture of life and replicate them in the church.”

The presiding bishop said he is working on making an “internal paradigm shift.”

More about the Way of Love and resources for exploring it are here. 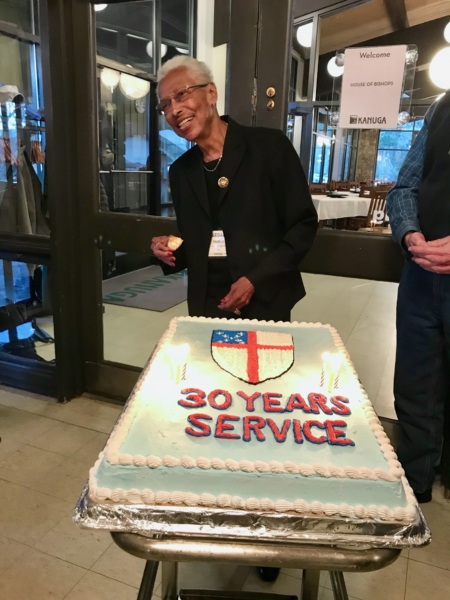 The House of Bishops honored retired Massachusetts Bishop Suffragan Barbara Harris on the evening of March 12, a month and a day after the 30th anniversary of her ordination and consecration as the first woman bishop in the Christian church. Photo: Mary Frances Schjonberg/Episcopal News Service

On March 14, the bishops are due to discuss the 2020 Lambeth Conference, including Archbishop of Canterbury Justin Welby’s decision not to invite same-sex spouses of bishops to the gathering.

They will close their time at Kanuga with a business meeting the afternoon of March 15.