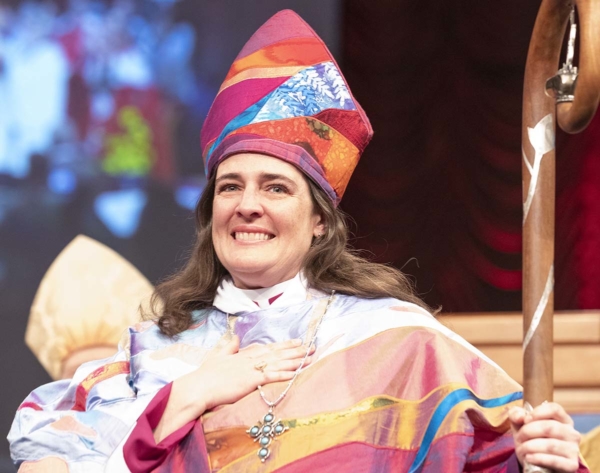 [Diocese of Arizona] The Rev. Jennifer A. Reddall was ordained and consecrated as the sixth bishop of the Diocese of Arizona at 11 a.m. on  March 9 at Church for the Nations in Phoenix. More than 1,400 people attended the historic service, as Reddall became the first woman bishop in the diocese’s 58 year history. More than 1,000 people have viewed the video of the service, which was originally live-streamed. Presiding Bishop Michael Curry led the service as chief consecrator. The Rev. Winnie Varghese, director of justice and reconciliation at Trinity Church in New York City, was the preacher.

In addition to a traditional choir with 90 choristers from churches around the diocese, music included Native American drumming and singing, a South Sudanese choir, a Spanish choir and a Mariachi band. Following the service, a celebratory reception was held in the courtyard at the church.

The consecration service may be viewed on the diocesan YouTube channel.

On Sunday, April. 7, 2019, the newly-consecrated bishop will be formally welcomed and “seated” at Trinity Cathedral in Phoenix at a 5 p.m. service.

Reddall was elected at the Diocesan Convention on Oct. 20, 2018, on the first ballot. Prior to election, she was the rector of Church of the Epiphany in New York, New York, a position she held since 2014. Reddall grew up in California, and after graduating from Yale University with a degree in theater studies, she joined the Episcopal Urban Intern Program in Los Angeles, California. She graduated from the  General Theological Seminary in New York City with a Master of Divinity degree in 2002. Reddall has one son, Nathan. Her parents moved to Tucson, Arizona, in 2016. She is in a long-term relationship with Paul Sheehan, who lives primarily in Hong Kong.

Reddall succeeded the Rt. Rev. Kirk S. Smith, who had served as the fifth bishop of the diocese for 15 years.

The Diocese of Arizona was established in 1959, and has approximately 20,000 members in 12,500 households in more than 60 congregations.