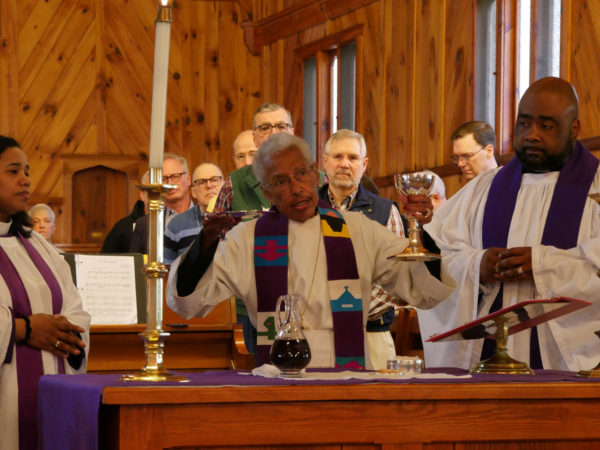 Massachusetts retired Bishop Suffragan Barbara Harris invites the congregation to communion March 12 during the opening Eucharist for the Episcopal Church’s House of Bishops four-day spring meeting at Kanuga Conference and Retreat Center. Harris was presiding little more than a month past her 30th anniversary of her ordination and consecration as the first woman bishop in Christianity. Photo: Mary Frances Schjonberg/Episcopal News Service

[Episcopal News Service – Hendersonville, North Carolina] The Episcopal Church’s House of Bishops has begun a four-day deep dive into the Way of Love, which Presiding Bishop Michael Curry calls a rule of life for the Episcopal branch of the Jesus Movement.

Curry explained to the house that the idea for the Way of Love, an intentional commitment to follow Jesus and adopt a set of practices, including turn, learn, pray, worship, bless, go and rest, grew out of a meeting of a group of bishops, clergy and laypeople he called together to consider how to help Episcopalians keep Jesus at the center of their lives and at the center of the church.

The question, he said, is how to live in such a way that, “when folk look at Episcopalians, they no longer see those that we celebrated for their power and their glory, but they see those who celebrate the glory and the grandeur and the goodness of God. How do we make that happen?”

The presiding bishop said the Way of Love was a return to Christianity’s roots. “We didn’t make anything new,” he said. “We went back to the treasure chest.”

Curry said he was struck by the way his sermon at the Royal Wedding last May was received. He insisted that he didn’t say anything new during his time in the pulpit in St. George’s Chapel in Windsor Castle. “What shocked me was that sermon was news because to represent Christianity as a way of love was actually not just good news, it was new news in Western culture,” he said.

He called that reality a “mission opportunity for us.” He said that it is now countercultural to have “a way of being Christian that looks like the face of Jesus of Nazareth and reflects his way of love, but that is countercultural, to be quite honest.”

The presiding bishop bemoaned the fact that most opinion polls of younger people report that they see Christianity as “narrow minded, fundamentalist-ic, homophobic and bigoted.” He said that “the public face of Christianity in the United States has been hijacked. There is no sense that there is a diversity of expressions among Christians,” but instead more and more the public image is “the image of a right-wing political agenda.”

The presiding bishop insisted that he is not talking about a liberal and a conservative stance. “This is about following Jesus, not anybody’s political party,” he said.

More about the Way of Love and resources for exploring it are here. 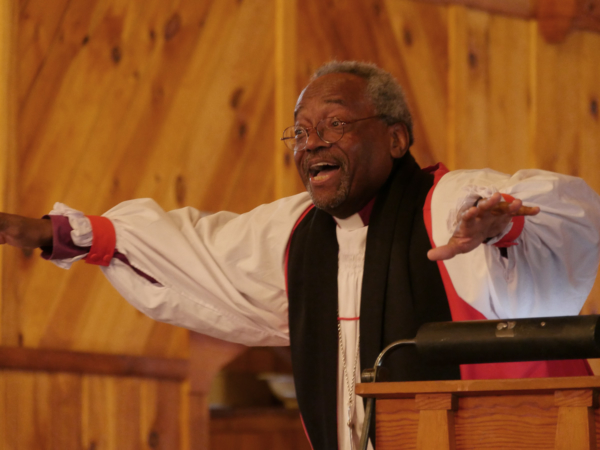 Presiding Bishop Michael Curry said during his sermon in the Kanuga chapel that the church must return to its roots in the “ultimate inclusiveness” of Jesus. Photo: Mary Frances Schjonberg/Episcopal News Service

During his sermon at the opening Eucharist earlier in the day, Curry invoked what he called the “heritage” of Jesus at the Last Supper and what E. Franklin Frazier called the “underground church” of slaves in the United States. The church, Curry said, must get back to its rootedness in Jesus so that it can preach the good news of salvation to all. The slaves went to church on Sunday morning with their masters, but their underground church represented “the Christian movement for them, and it is out of this movement, this Jesus movement, that they realized that this Jesus holds the key to set the captive free, and he holds the key to set the slave master free,” he said.

It was “the ultimate inclusivity,” Curry said. 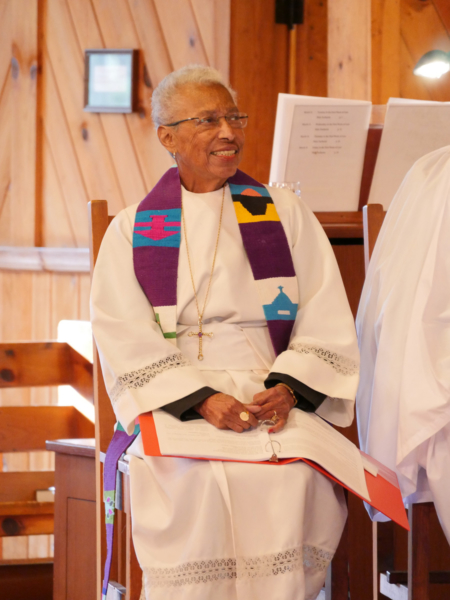 “What was true for Jesus at the Last Supper and what was true for those slaves in the antebellum cotton and tobacco fields may well be true for us even in our time as The Episcopal Church,” he said.

Curry told the story of a discovery that the congregation of St. James’ Episcopal Church in Baltimore made after its building was struck by lightning. During restoration of the church, where Curry served from 1988 to 2000, an urban archeologist discovered, below a number of layers, a mural of a multibranched vine painted on the original surface of the floor.

“It may be that underneath the layers that have been added over the centuries – layers of establishment, layers of being the first church, layers of having the finest citizens, layers of endowments, layers of comfort and convenience – it may be that underneath it all, there is a very simple vine and branches. ‘I am the vine, you are the branches. Abide in me, and I in you,’” Curry said. “And no matter how bad your demographics look, no matter how tough the cultural circumstances, no matter who is in the White House, ‘I am the vine. Those who abide in me will bear much fruit.’”

The bishops will close their week at Kanuga with a business meeting the afternoon of March 15.