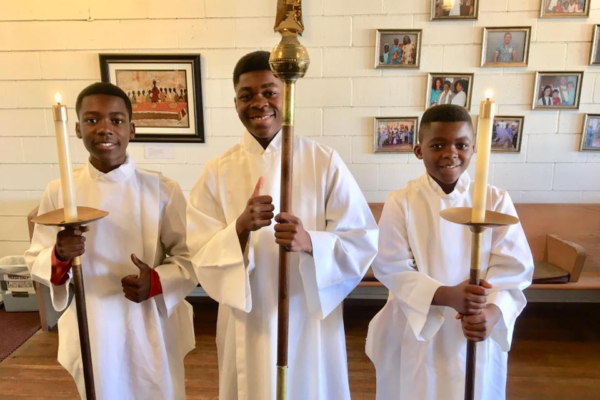 [Episcopal News Service] An Episcopal congregation in California is rallying behind the family of a Congolese asylum-seeker as he fights to stay in the United States.

Constantin Bakala, 48, who is being held in federal detention, also longs to be reunited with his wife and seven children in San Diego, where the family has been welcomed into the congregation at St. Luke’s Episcopal Church. Some of the children, ages 6 to 17, have begun serving as acolytes and singing in the choir, the Rev. Colin Mathewson, the vicar, told Episcopal News Service.

“It’s just been a transformative experience,” Mathewson said, for him and his congregation.

The congregation, which he co-pastors with his wife, the Rev. Laurel Mathewson, is a mix of native-born Americans, Sudanese immigrant families and newer Congolese refugees. They rejoiced last week when Bakala won a stay of deportation while federal officials consider a request to reopen his asylum case, but he still could be sent back to Congo, where he fears he will be killed.

Bakala’s supporters at St. Luke’s aren’t giving up on him.

“It really feels like a moment that God has invited us into, that we can say ‘no’ to or ‘yes’ to,” Mathewson said. “We said ‘yes,’ and it’s really changed us.”

Bakala was aligned with an opposition political party in the Democratic Republic of Congo and fled with his family to escape the threat of persecution, Mathewson said. The family flew to Brazil and began making their way to San Diego, at one point nearly drowning in a boat off the coast of Nicaragua. 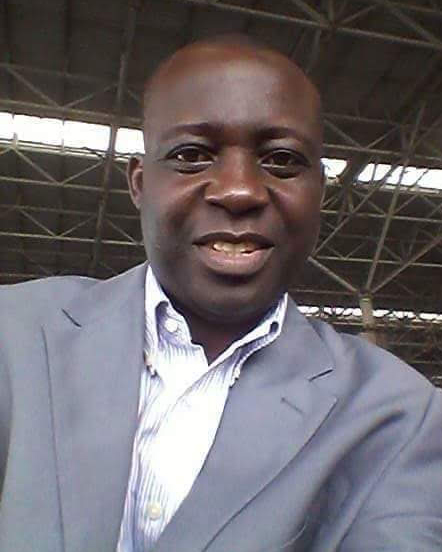 They arrived in Tijuana, Mexico, in November 2017 and requested asylum at the United States border, as prescribed by U.S. law. Bakala’s wife, Annie Bwetu Kapongo, was required to wear an ankle monitor so she could be released with her children while their cases are pending, but Bakala was separated from them and detained. Mathewson said Bakala represented himself in his asylum hearings, and the court rejected his asylum request and set him on the path to deportation.

He has spent the past 15 months behind bars at a series of detention facilities, including in Georgia and Virginia, unable to see his family.

“Constantin’s heartbreaking case is one example of the extreme difficulties asylum-seekers face in the U.S.,” said Lacy Broemel of the Episcopal Church’s Office of Government Relations, which advised Mathewson on raising awareness of Bakala’s case. “Family separation, lack of legal support and detention are all too common when it comes to the experiences of those who are applying for asylum protections.

“In the Office of Government Relations, we advocate to the U.S. government to keep families together, increase access to legal representation, and for alternatives to detention, and we urge the church to advocate for those systematic changes as well.”

Such issues weren’t on the radar of the congregation of St. Luke’s when the Mathewsons first learned about Bakala’s plight. Their Congolese parishioners primarily are refugees, not asylum-seekers, who had immigrated from a camp in Tanzania and speak a different tribal language from the one spoken by the Bakalas.

A bit of chance brought the Bakalas to St. Luke’s. One member of the congregation teaches English-as-a-second-language classes for refugees, and one of his students accepted an invitation to attend worship services at St. Luke’s, which typically draw about 125 people on Sundays. That woman knew Kapongo, Bakala’s wife, through a mutual babysitter and invited her to St. Luke’s as well, in July 2018.

In conversation with the family, the Mathewsons soon learned about Bakala’s deportation case, and within a week, they were able to find an attorney willing to represent Bakala pro bono.

“In a lot of ways, it was legally too late,” Colin Mathewson said, because the court already had ruled against Bakala’s asylum request. His remaining hope is to submit new evidence on appeal. Bakala fears for his life, Mathewson said, “but the hard part is you have to prove it.”

Hope was running out last month with a deadline looming for his deportation. On Feb. 22, Bakala was granted an emergency stay of deportation, but only for one week, buying his attorney time to press for a longer stay.

At the same time, St. Luke’s was mobilizing an awareness campaign that caught the attention of local media, which featured Bakala’s case in several news reports. Hundreds of people signed a petition opposing Bakala’s deportation, and the congregation raised about $5,000 to support his family.

Then, on March 1, the family received the good news. The U.S. Justice Department’s Board of Immigration Appeals granted another stay. It doesn’t save Bakala from deportation, Mathewson said, but he will remain in the United States at least another few months while the motion to reopen his case is reviewed.

Kapongo expressed gratitude last week to everyone who has stepped forward to help her family while her husband is in detention.

“I feel at ease when I see you helping and supporting me,” she said in French at a demonstration at the federal building in San Diego, according to the San Diego Union-Tribune. “Without them, I would still be sad at the house.” She and her children are due at a hearing in September on their requests for asylum.

NEXT on @KPBSnews #EveningEdition -Time is running out for a father of 7, who may be deported back to the Democratic Republic of Congo. After she survived torture, poison and dangerous journey to the US, Annie Bwetu Kapongo made a public plea to save her husband #ConstantinBakala pic.twitter.com/E0juKJuRat

At this point, the congregation wouldn’t think of turning its back on the family, Mathewson said.

“They are a part of our church, so it’s not some partisan issue,” Mathewson said. “We’re family, and let’s do what we can to take care of each other, to stand up for each other.”