[Episcopal News Service] The buffalo hide once on display at the Episcopal Church Center in New York is an imposing artifact, expansive enough to encompass native culture, artistic symbolism, bonds of faith, 400 years of American history and a decade-old connection between a presiding bishop and a Hawaiian Episcopal leader.

The hide also is in need of a new home, displaced by construction to accommodate a new tenant in part of the Episcopal Church Center.

“The concern is that it not end up in a place where it would [be] forgotten,” said the Rev. Brad Hauff, The Episcopal Church’s missioner for indigenous ministries. He’s “pursuing a number of possibilities” for relocating the painted buffalo hide.

That search for a new home comes as Episcopalians mourn the January death of the Rev. Malcolm Chun, the native Hawaiian who offered the hide as a gift to then-Presiding Bishop Katharine Jefferts Schori in 2008, when Chun was secretary general of the Anglican Indigenous Network. Chun, whose funeral was Feb. 23, saw the hide as a symbol of the early English settlers’ colonial-era commitment to bringing Christianity to America’s native tribes, the Rev. Robert Two Bulls Jr. told Episcopal News Service.

“Malcolm … was really just a big supporter of the Jamestown Covenant,” said Two Bulls, who serves the Episcopal Church in Minnesota as missioner for the Department of Indian Work. He also is the artist who painted the buffalo hide at Chun’s request. 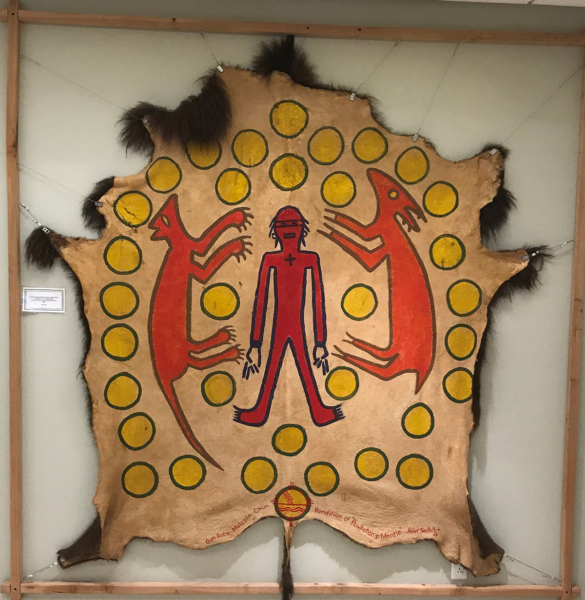 This buffalo hide was painted by the Rev. Robert Two Bulls Jr. to replicate the design of Powhatan’s Mantle, a 400-year-old relic made from deer skins and shell beadwork. Photo: Geoffrey Smith

Chun’s vision was to replicate Powhatan’s Mantle, said to have belonged to the chief who first welcomed the Jamestown settlers in 1607 in what today is Virginia. “I think this was his way of still keeping that connection alive,” Two Bulls said.

The first Jamestown Covenant was a double-edged sword. For more than two centuries, America’s native peoples suffered a prolonged genocide at the hands of British colonists and their descendants, who saw the American Indians as “savages.” But those colonists also brought with them a mandate from King James I to preach the Christian Gospel to all they encountered in this “new world.”

“Thus the Anglican commitment to preach and plant the true word of God among the American Indians was firmly established with the first permanent English settlement in America,” Owanah Anderson wrote in her 1988 book “Jamestown Commitment.” Anderson, who served as the church’s missioner for Native American and indigenous ministries, noted the most prominent early convert was Powhatan’s daughter, Pocahontas, who was baptized while “being held hostage aboard an English ship at anchor in the James River.”

The church’s commitment was renewed nearly 400 years later with the signing of the New Jamestown Covenant in 1997, launching The Episcopal Church on a Decade of Remembrance, Recognition and Reconciliation. Jefferts Schori participated in a 2007 procession and Eucharist at the Jamestown historic site marking the start of a second decade affirming the covenant.

The original Powhatan’s Mantle is on display at the University of Oxford’s Ashmolean Museum of Art and Archaeology in England. Although it once was thought to be a cloak, it more likely was a wall hanging, according to the museum.

It was made from four deer hides sewn together and decorated with white shell beadwork depicting a human figure flanked by two animals, likely a deer and a mountain lion or wolf. The more than 30 beaded circles may represent settlements and tribes, the museum says. Powhatan may have given it as a gift for King James I, according to one theory. It later ended up in possession of the 17th-century Englishman whose collection became the founding collection of the museum.

One of Tradescant's most famous additions to the founding collection was Powhatan's Mantle http://t.co/yM43ZJXvPk pic.twitter.com/nB0u6gkKBd

Here is a close-up of the shell beading on our #ObjectoftheMonth, Powhatan's Mantle, on display in our new Ashmolean Story gallery. Once thought to have been a cloak, it is now considered more likely that it was a wall hanging https://t.co/1mGhmqJ6KX pic.twitter.com/62Jcsr2bJm

Clearly, the buffalo hide at the Episcopal Church Center is not Powhatan’s Mantle, but that was Chun’s inspiration when preparing this gift for Jefferts Schori.

Chun, born in 1954 in Honolulu, was an indigenous studies scholar with degrees from colleges in Hawaii, New Zealand and Canada, and he wrote several books and articles about native Hawaiian culture, beliefs and practices. One of his projects was “Na ‘Euanelio Hemolele,” described by the Diocese of Hawaii as “a lectionary-size book containing the gospels of Matthew, Mark, Luke and John, in the Hawaiian-language, complete with diacritical marks.”

He was ordained a deacon in 2011 and a priest in 2012, but his involvement in the church’s indigenous ministries predated his ordination and included service on the Council on Indigenous Ministry, the Indigenous Theological Training Institute Board and the Anglican Indigenous Network.

Chun died unexpectedly on Jan. 20, 2019, at age 64. His funeral was held the following month at the Cathedral of St. Andrew in Honolulu, where he had been named an honorary canon in 2018.

“I counted Malcolm as a friend and a teacher,” Hawaii Bishop Robert Fitzpatrick said in a message to his diocese. “His service to the Cathedral, to the Diocese, to the Church, and to me will be warmly remembered.”

Two Bulls, a Lakota originally from Red Shirt, South Dakota, was serving in the Diocese of Los Angeles more than a decade ago when he first met Chun, likely on one of Chun’s trips to Southern California on behalf of the Anglican Indigenous Network. 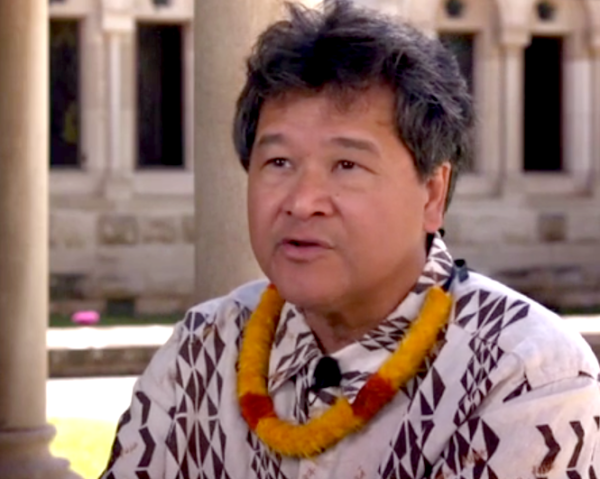 The Rev. Malcolm Chun, seen in a Diocese of Hawaii video about the church’s history in Hawaii, was secretary general of the Anglican Indigenous Network when he gave the buffalo hide to Presiding Bishop Katharine Jefferts Schori in 2008.

“He was just a great guy once you got to know him,” said Two Bulls, who recalled talking to Chun by phone a week before he died. “We were making plans to do some other work,” Two Bulls said, including producing a new issue of the Indigenous Theological Training Journal.

Their partnership on the buffalo hide began when Chun acquired it from a “purveyor of such products” and asked Two Bulls to paint it, using Powhatan’s Mantle as his model. Two Bulls conducted some research on the original, including by contacting the museum. While aiming to stay true to the spirit of the original, he “took a little bit of artistic liberty,” such as his addition of color and placing a cross on the chest of the person depicted at the center of the hide.

The hide, stretched out and tethered to the edges of a wooden frame, was presented to Jefferts Schori at a time when she, as presiding bishop, had been in discussion with Chun and others with the Anglican Indigenous Network about maintaining the church’s commitment to indigenous ministry, according to an Anglican Communion News Service article from 2008.

Jefferts Schori, in an email to ENS, praised Two Bulls’ art as “always striking,” and she recalled his buffalo hide painting as “a powerful piece.”

“It would be a gift to many if it were more widely seen,” she said. “I hope it doesn’t get lost.”

A hardware store is moving into the space where the hide previously was on display at the Episcopal Church Center. Episcopal Church’s Chief Operating Officer Geoffrey Smith asked Hauff to look into finding an appropriate new home for it, and Hauff said the search continues.

Two Bulls noted the piece is rather large, which could limit Hauff’s options, but he suggested a diocese like Oklahoma that has a vibrant indigenous ministry – or Virginia, given the history of Powhatan’s Mantle.

“It is a teaching tool, so having it in a place where it can be viewed easily/widely would be first and foremost the main criteria for finding a place to house it,” Two Bulls told Hauff recently by email. “I am pretty sure that this would be what Malcolm would want.”