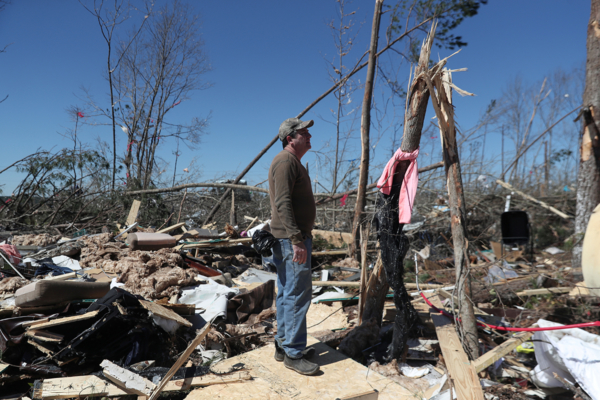 Jed Roberts stands March 5 on the remains of his sister’s trailer home, destroyed by tornado, in Beauregard, Alabama. Photo: Reuters

[Episcopal News Service] Episcopalians in Alabama have begun responding to the aftermath of devastating tornadoes that cut a swath of destruction through the state’s midsection over the weekend, leaving at least 23 dead, including four children.

A statement released by the Diocese of Alabama on March 4 reports a tornado passed within a mile of St. Stephen’s but the church doesn’t appear to have sustained any damage. The Rev. Larry Williams, priest-in-charge, and the Rev. Deacon Judy Quick are working with local agencies to assess the needs in the area and determine how the congregation can assist with relief efforts.

The Diocese of Alabama Disaster Relief Fund has made an initial contribution to those efforts at St. Stephen’s, and the diocese is receiving assistance and guidance from Episcopal Relief & Development. Donations to the diocese can be made online by selecting “Disaster Relief” in the dropdown list.

“As we have learned from past events, it will take days or weeks for us to learn the full impact of these storms, and we will provide information about needs and response as we learn more,” Bishop Kee Sloan said in the diocese’s statement.

“We are thankful that the people of St. Stephen’s Smiths Station are safe and that the church there is able to respond to the needs of their neighbors,” Sloan said. “I ask folks to keep the community of Lee County in their prayers, especially those affected by these storms, those that are grieving the loss of a loved one or grieving the loss of their home. Please also pray for the first responders and all those that will take part in the work of recovery.”

Episcopal News Service tried contacting the three Episcopal churches in the region by phone and email but was not able to reach any church leaders for this story.

The “monster tornado” on March 3 that caused the most damage was a mile wide and traveled more than 26 miles, according to the National Weather Service’s initial estimates. With a wind speed of 170 mph, the EF-4 storm leveled homes, downed trees and power lines and left Beauregard, Alabama, a community of about 10,000 residents, looking like a “war zone.”

About 90 people were reported injured, and Lee County Sheriff Jay Jones said at a news conference March 4 that the death toll from the storm could rise as emergency crews search for people still missing. It was the deadliest tornado in the United States since 2013, when 25 people died in Oklahoma, and the Alabama death toll tops the total tornado fatalities from all of 2018.

The National Weather Service in Birmingham confirmed three additional tornadoes touched down on March 3 in the region with lesser wind speeds and no reported fatalities.

On March 5, a group from Lee-Scott Academy in Auburn gathered in the morning outside the Christian school to pray after learning that a student, fourth-grader Taylor Thornton, was among those killed by the more powerful tornado, according to the Montgomery Advertiser.

Episcopal Relief & Development released a statement March 5 pledging continued support for the diocese and its congregations.

“Disasters have three phases: rescue, relief and recovery,” said Katie Mears, senior director of Episcopal Relief & Development’s U.S. Disaster Program. “Right now, the disaster response is moving from the initial rescue phase, where first responders such as police and fire department are focusing on saving lives, into the relief phase. In the coming weeks and months, we will work with the Diocese of Alabama to provide relief and help communities recover.”