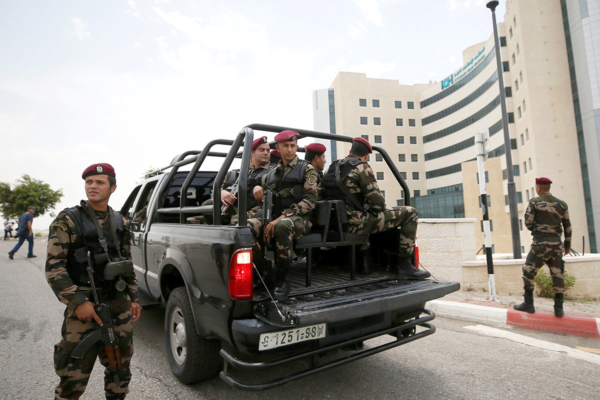 Palestinian security forces guard outside a hospital in Ramallah, West Bank, in May 2018. Photo: Reuters

[Episcopal News Service] The Episcopal Church – raising concerns reportedly shared by officials within the Trump administration and Israeli government – is joining a chorus of voices calling for an emergency update to a new U.S. law that has halted aid to Palestinian security forces.

Congress passed and President Donald Trump signed the law, the Anti-Terrorism Clarification Act, in October as a way to help victims of terrorism, but when the law took effect Feb. 1, the Palestinian Authority was forced to refuse $60 million in U.S. aid or else open itself up to exponentially larger financial liability through potential American lawsuits.

The U.S. State Department is now working on a fix to the law that will “maintain security cooperation on one hand and also justice to the families of the victims of terror,” an unnamed Israeli official told the Washington Post. The Israel-based news outlet Haaretz described the Trump administration in December as “scrambling” to find a solution.

“The Anti-Terrorism Clarification Act has resulted in the total cessation of aid to Palestinians, with devastating consequences for the Palestinians most in need of humanitarian assistance. This legislation also harms the security of Israel,” Rebecca Blachly, director of The Episcopal Church’s Office of Government Relations, said in an emailed statement to Episcopal News Service. Her office “has been working hard in partnerships and behind the scenes with Congress, [the Department of] State, and USAID to address this critical issue.”

The office’s Episcopal Public Policy Network also issued an alert recently, asking members to contact their elected officials. “We must urge Congress to find a solution so that the Palestinian people can continue to receive life-saving humanitarian assistance,” the alert said.

The alarm over the sudden loss of this relatively narrow stream of security aid comes amid the larger debate over the Trump administration’s more deliberate efforts to end the broader flow of U.S. humanitarian aid to the Palestinians. Hundreds of millions of dollars in cuts over the past year have hampered a variety of efforts: U.N. relief to Palestinian refugees; programs to improve infrastructure in the West Bank and Gaza; programs to foster greater understanding between Israelis and Palestinians; and operations of a network of hospitals in East Jerusalem, including one operated by the Anglican diocese in Jerusalem.

Critics of the U.S. aid cuts question the strategy the Trump administration reportedly is employing to weaken the Palestinian position in future peace talks with Israel by seeking to “disrupt” the United Nations agency that provides relief to Palestinian refugees.

“Sometimes you have to strategically risk breaking things in order to get there,” Jared Kushner, Trump’s son-in-law and a senior adviser to the president, said in a Jan. 11, 2018, email obtained by Foreign Policy.

The U.N. Relief and Works Agency, or UNRWA, was established in 1949 to help Palestinians displaced from their homes by the Arab-Israeli War. For decades, Palestinians have argued for granting the refugees, now estimated at more than 5 million, a “right of return” to their homes in the Israeli-occupied territories of the West Bank and Gaza Strip. Israel has rejected that position.

On Jan. 16, 2018, the Trump administration announced it was withholding $65 million out of the $125 million it had planned to contribute to UNRWA for the year. The U.S. has long been the largest donor to the agency, which provides health, education, financial and family services to Palestinian refugees in Jordan, Lebanon, Syria and the occupied territories.

Two days later, on Jan. 18, the administration announced an additional cut of $45 million in food aid that had been promised to Palestinians in the West Bank and Gaza.

The impact of such cuts was on the agenda of Episcopal Church’s General Convention when bishops and deputies met in July 2018 in Austin, Texas. They approved a resolution that called on the U.S. to “maintain its historic commitment to alleviating the poverty of Palestinians” by restoring aid spending.

In August, instead of restoring the aid, the State Department revealed it would end $200 million in direct aid to Palestinians and withdraw all U.S. funding of UNRWA, calling the agency a “irredeemably flawed operation.”

“We are very mindful of and deeply concerned regarding the impact upon innocent Palestinians, especially school children, of the failure of UNRWA and key members of the regional and international donor community to reform and reset the UNRWA way of doing business,” the State Department said on Aug. 31. 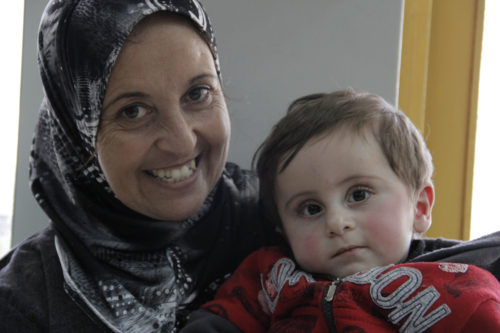 A woman and her son receive care in 2013 at the Princess Basma Centre in East Jerusalem. Photo: Lynette Wilson/Episcopal News Service

Then in September, the Trump administration announced it also would withdraw $25 million from the East Jerusalem Hospital Network, which includes the Princess Basma Centre, operated by the Episcopal Diocese of Jerusalem.

Presiding Bishop Michael Curry protested those funding cuts in a joint statement Nov. 1 with leaders of other Christian churches tied to the hospital network.

“Each has benefited from U.S. assistance for decades and, therefore, this decision to discontinue that funding leaves the patients, the wider Palestinian community, and us disappointed and perplexed,” the joint statement said. “It is difficult for us to understand why this humanitarian assistance is being brought to a halt, given that lives are being threatened unnecessarily.”

At the same time, the Diocese of Jerusalem’s Al Ahli Arab Hospital in Gaza has been struggling under the financial strain of lost U.S. aid to the Palestinians. Though the hospital received no direct funding from the U.S., it is supported by UNRWA. The U.S. cuts resulted in a 78 percent drop in UNRWA support for the Ahli hospital, said Heidi Shott, a spokeswoman for the American Friends of the Episcopal Diocese of Jerusalem, or AFEDJ.

AFEDJ Executive Director John Lent, who is visiting the Diocese of Jerusalem this month, “hopes to learn more about current conditions and the impacts of the cuts in aid,” Shott said.

The Trump administration’s efforts to salvage at least one form of Palestinian aid, the $60 million for security, stems from a program the U.S. launched in 2007, with Israel’s encouragement and cooperation, to train members of the Palestinian National Security Force to fight crime and terrorism in the West Bank. The U.S. continued to support the program financially until its future was thrown into question this year by the new U.S. law, which also could affect nongovernmental relief organizations operating in the region.

“Congress must act to resolve this immediately so that we can continue to support the programs in need of U.S. funds,” said Blachly, the Office of Government Relations director. “As Episcopalians, we have an additional responsibility to support the Episcopal Diocese of Jerusalem and the ministries they carry out that have been negatively impacted by this unprecedented cut in funds.”