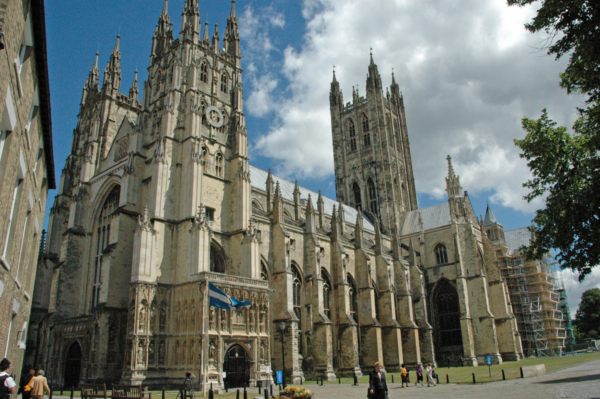 Many of the major liturgies during the Lambeth Conference of bishops take place at Canterbury Cathedral, the seat of the archbishop of Canterbury and what is considered the “mother church” of the Anglican Communion. Photo: Mary Frances Schjonberg/Episcopal News Service

[Episcopal News Service – Midwest City, Oklahoma] Executive Council has asked The Episcopal Church’s bishops and their spouses, and the House of Bishops collectively, “to prayerfully and carefully consider her/his/their response, choices and actions” in the light of what it calls the “troubling circumstances” of the decision to exclude same-sex spouses from the 2020 Lambeth Conference of bishops.

Council unanimously approved a resolution on Feb. 24 that says it finds the decision “inconsistent” with the positions of The Episcopal Church and with multiple statements of Anglican Communion entities that have urged the church to listen to the experiences LGBTQ persons.

“Exclusion of spouses at Lambeth Conference: When does all mean all?” calls the decision “particularly misguided and inconsistent with the stated purposes of the conference,” in part because the conference planning group decided to run a joint program for bishops and their spouses, rather than the traditional parallel programs. The FAQs section of the Lambeth2020 website says that the joint conference “is in recognition of the vital role spouses play across the Anglican Communion and a desire to support them in their ministry.”

The resolution came in response to a Feb. 15 Anglican Communion News Service blog in which Anglican Communion Secretary General Josiah Idowu-Fearon wrote that Archbishop of Canterbury Justin Welby had invited “every active bishop.” However, Idowu-Fearon said that “it would be inappropriate for same-sex spouses to be invited to the conference.” He said the Anglican Communion defines marriage as “the lifelong union of a man and a woman,” as codified in Resolution 1.10 of the 1998 Lambeth Conference. 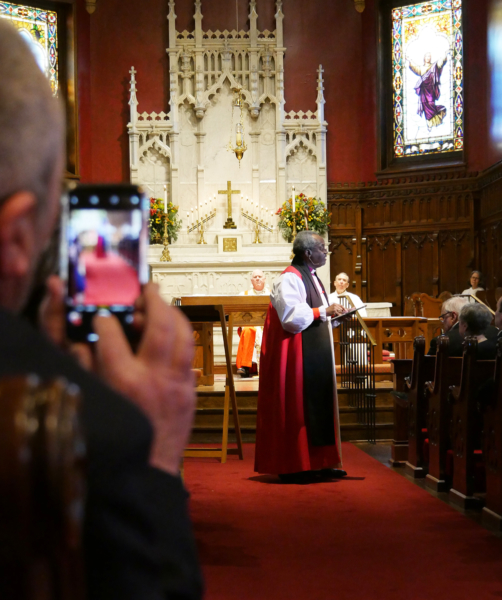 Presiding Bishop Michael Curry said in a statement after council’s vote that the resolution “reflects our commitment to be ‘a house of prayer for all people,’ as the Bible says, where all are truly welcome.”

Curry said, “It reflects our commitment to be an inclusive church, not based on a social theory or capitulation to the ways of the culture, but based on our belief that the outstretched arms of Jesus on the cross are a sign of the very love of God reaching out to us all. It reflects our belief that the words of the Apostle Paul to the Galatians should be true for the church today: ‘All who have been baptized into Christ have put on Christ. There is no longer Jew or Gentile, slave or free, male or female, for all are one in Christ.’”

* expresses its love, support, concern and prayers for the spouses who have not been invited or may not be invited to the Lambeth Conference, and

* affirms and laments the hurt and pain this action causes to gay, lesbian, bisexual, and transgender persons across the Anglican Communion.

The resolution includes a lengthy summary of what it calls General Convention’s more than 40 years of “support of homosexual, lesbian, gay, bisexual, and transgender persons, their partners, spouses and families, both in secular society and in the church,” beginning in 1976.

It offers a summary of statements and resolutions that have been issued by Anglican Communion entities about the full inclusion LGBTQ people in the life of the church. Among those are the Anglican Consultative Council’s decision in 2012 to commend to the communion for study the statement of the International Anglican Liturgical Consultation’s “Rites Relating to Marriage.”

Section 15.5 of that statement says, “Some in the Anglican Communion are discerning that much of what is held to be true of Christian marriage between a man and a woman is also found and given expression in faithful, committed, monogamous, lifelong relationships between two men or two women, whether it is called a marriage or something else. This provides an opportunity for continuing conversation within the Communion, and listening to the experiences of gay and lesbian disciples of Christ.”

The council passed the lengthy resolution on the final day of its four-day meeting here, after its governance and operations committee spent hours the day before writing and revising it.

The Rev. Aaron Perkins told the committee on Feb. 23 that he and council colleague Diane Pollard discussed House of Deputies President the Rev. Gay Clark Jennings’ opening remarks and agreed that “the council should not leave here without some sort of statement, without some sort of resolution that speaks to the issue.”

When the council’s debate raised the question of why the resolution does not tell Welby to invite same-sex spouses, Oklahoma Bishop Ed Konieczny said he and his committee colleagues tried to “be in a place where we said something that definitely describes our concerns about what has happened without crossing over into a place where we’re being attacking in some way.”

The committee hoped that the resolution would support people who can be part of an ongoing conversation with Anglican Communion officials in hopes of giving Welby “the opportunity to react or respond on his own, if there is flexibility in that space,” he said.

“[If] we don’t give him the space, if there is any, to change his mind,” the rest of the communion will feel that Welby is “bound to the pressures” of The Episcopal Church, Konieczny said.

Pollard urged the council to approve the resolution because it shows that the council disapproves of a decision that is “unfair to those that we hold dear.” In addition, she said, “Giving the archbishop [of Canterbury] quote, wiggle room, unquote, is a very good strategic idea while trying to avoid telling him to do something.”

The resolution “certainly is not the strongest resolution that I would have liked, but I think that it is a good middle point,” Pollard said.

The Rev. Mally Lloyd reminded the council that it meets three more times before the Lambeth Conference convenes on July 23, 2020. “What I like about this resolution is that it is very open, and if we need to narrow it down and be more directive, we can,” she said.

Meanwhile, Welby’s exclusion of same-sex spouses will no doubt be discussed at the House of Bishops’ previously scheduled meeting March 12-15, 2019, at Kanuga outside Hendersonville, North Carolina.

During the governance and operations committee meeting on Feb. 23, Konieczny noted that the 17th meeting of the Anglican Consultative Council, or ACC, is scheduled for April 28-May 5 in Hong Kong. He will be attending for the first time as the bishop member of The Episcopal Church’s three-person delegation.

“I hate to say this, but I’m looking at it from the political sense of how do I engage this conversation when I get to Hong Kong with the ACC,” he told the committee. 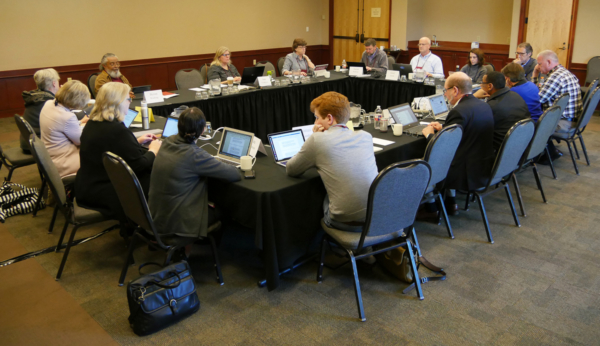 Executive Council’s Committee on Governance and Operations on Feb. 23 considers the wording of the resolution responding to Archbishop of Canterbury Justin Welby’s decision not to invite same-sex spouses to the 2020 Lambeth Conference of bishops. The entire council approved the resolution the next day. Photo: Mary Frances Schjonberg/Episcopal News Service

In Jennings’ remarks on Feb. 21, she told the council that Welby’s decision not to invite same-sex spouses to the conference was wrong on many levels.

The Lambeth Conference is a periodic gathering of bishops from across the Anglican Communion, which the archbishop of Canterbury calls and issues invitations for. The last gathering was in 2008. The July 23-Aug 2, 2020, gathering will be held, as is tradition, in Canterbury, England, with most of the sessions at the University of Kent. The theme for the 2020 gathering is “God’s Church for God’s World: walking, listening and witnessing together.”

Konieczny said on Feb. 23 that he thought there was a possibility that Welby could change his mind, though Konieczny said, “I know that the word from [Anglican Communion Secretary General] Josiah [Idowu-Fearon] is that this is a done deal; there’s no more conversation.”

Konieczny added, “Personally, I don’t think the cement has completely solidified around that yet.”

“I don’t think that [Welby] was prepared for this to become public yet,” he said. “He was pre-empted.”

While some have suggested that Episcopal Church bishops and/or their spouses should boycott Lambeth 2020, Konieczny argued that staying away would not “serve our cause.” The bishops and spouses ought “to be there to witness to what’s happening and say this is inappropriate,” he said.

Welby’s refusal currently effects at least two bishops and one bishop-elect who are publicly known to have same-sex spouses. Diocese of New York Bishop Assistant Mary Glasspool is currently The Episcopal Church’s one actively serving bishop who has a same-sex spouse. She is married to Becki Sander, her partner of more than 30 years.

The Rev. Thomas Brown is due to be ordained and consecrated on June 22 as the next bishop of the Diocese of Maine. He is married to the Rev. Thomas Mousin. The diocese elected Brown on Feb. 9. His election is about to enter the consent process canonically required in all bishop elections. A majority of diocesan standing committees and bishops with jurisdiction must sign off on each election.

The only other active bishop in the Anglican Communion to whom Welby’s decision is known to apply is Diocese of Toronto Bishop Suffragan Kevin Robertson, who married Mohan Sharma, his partner of nearly 10 years, on Dec. 28, 2018. The diocese congratulated him on his marriage, which was attended by Toronto Archbishop Colin Johnson and Toronto Bishop Diocesan Andrew Asbil. Robertson recently told Episcopal News Service that Welby told him in person earlier this month that Sharma would not be invited. Robertson and Sharma are the parents of two young children.

The Feb. 21-24 meeting of Executive Council took place at the Sheraton Midwest City Hotel at the Reed Conference Center.

Episcopal News Service’s coverage of the meeting is here.