[Episcopal News Service – Midwest City, Oklahoma] Presiding Bishop Michael Curry and the Rev. Gay Clark Jennings, House of Deputies president, placed the future of faith and the church as an institution, and the shape of the Episcopal Church’s relationship with the Anglican Communion, before the Executive Council as it opened its four-day meeting here.

Curry framed his opening remarks around his experience the prior week when visiting the Anglican Church of Southern Africa. While there, a young Anglican asked him if there was a future for the church.

“I realized he was asking if there is a future for faith,” Curry said. “Therefore, does the church, the community of people who have faith in Jesus, have a future? That may be one of the most critical questions before us in our time.”

The question applies to all faith communities, not just Episcopal ones, or even solely Christian ones, he said.

Jennings devoted most of her opening remarks to Archbishop of Canterbury Justin Welby’s decision not to invite same-sex spouses to the 2020 Lambeth Conference of bishops. She asked whether “there is still time to resolve this situation and ensure that all bishops’ spouses will be invited to the Lambeth Conference.” 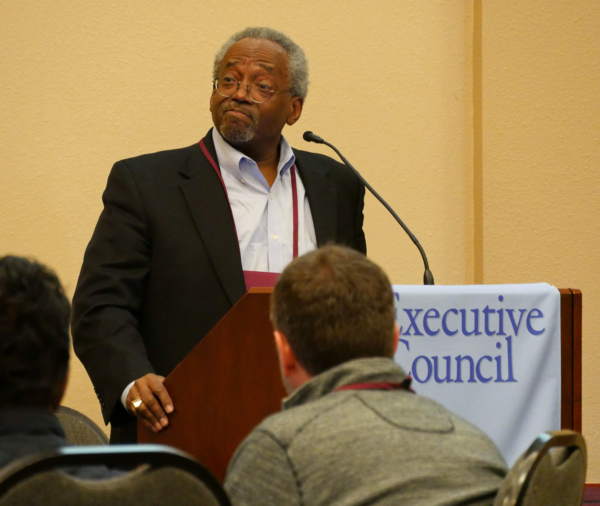 Do faith and faith communities have a future?

In answer to the question of the church’s future, Curry told the young man, “Faith does not have a future if faith and religion is seen and understood primarily and essentially as an institutional arrangement.

“Faith will not have a future if we believe that the church is primarily an institution which we must prop it up to keep it going,” Curry said. “I say that as a 65-year-old man who, when he finishes his term as presiding bishop, will then go on the Church Pension Fund. I’m not anti-institutional.”

The sorts of questions the young man asked, Curry said, are not calling on the church to enact another strategic plan, but to dare “to ask the spirit, ‘Where shall we go?’”

Curry reminded the council that the Christian church has “only been an institution periodically; it began as a nascent Jesus Movement.” In later centuries, Curry said, it became an institution that crowned emperors, only to be divided by theological schisms and reformations. The church has moved from the established churches of the majority to “a fragile minority.”

The presiding bishop insisted that the Holy Spirit was inspiring the members of council “to think, to pray, to listen to what the spirit is saying to our church and to find our life.”

Curry said, “We may not have easy days ahead of us, but that’s all right. Our Lord was crucified; Pilate thought he killed him – thought he was down for the count – but on Sunday morning, the brother got up and that’s who we follow. If we follow his way of love, then the gates of hell will not prevail against us.”

Council gave Curry a standing ovation when he concluded. 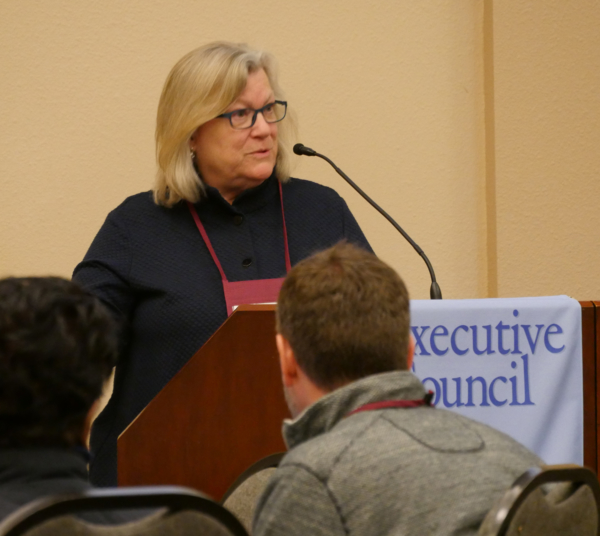 The Rev. Gay Clark Jennings, House of Deputies president and Executive Council vice chair, told council that she hopes there is time to ensure that all bishops’ spouses will be invited to the 2020 Lambeth Conference. Photo: Mary Frances Schjonberg/Episcopal News Service

Anglican Communion Secretary General Josiah Idowu-Fearon wrote in a Feb. 15 Anglican Communion News Service blog that Welby had invited “every active bishop” because “that is how it should be – we are recognizing that all those consecrated into the office of bishop should be able to attend.

“But the invitation process has also needed to take account of the Anglican Communion’s position on marriage which is that it is the lifelong union of a man and a woman,” Idowu-Fearon wrote. “That is the position as set out in Resolution I.10 of the 1998 Lambeth Conference. Given this, it would be inappropriate for same-sex spouses to be invited to the conference.”

Resolution I.10 was passed by the conference in 1998 after heated debate.

She said that among the communion’s four Instruments of Communion – the archbishop of Canterbury, the Lambeth Conference, the Primates’ Meeting and the Anglican Consultative Council, or ACC – only the ACC is seen as the corporate entity of the Anglican Communion by the instruments’ governing documents and British law. Thus, Jennings said, setting policy is the ACC’s job.

She also noted that the resolution’s reference to marriage as a “lifelong union” seems not to pertain to the opposite-sex spouses of bishops who have been divorced and remarried but are still invited to Lambeth. “We are left to conclude that excluding same-sex spouses is a selective decision – perhaps even an arbitrary one,” she said.

Jennings suggested that, if the communion cannot resolve to invite all of the bishops’ spouses, “I think that the day is coming when we will need to take a hard look at where and how we invest the resources of The Episcopal Church across the Anglican Communion.”

The House of Deputies president did not elaborate, and she cautioned that her stance “is not at all the same thing as saying that we should not be in relationship with the rest of the Anglican Communion.”

The Episcopal Church’s 2019-2021 budget pledges $1.15 million to the work of the Anglican Communion office (line 416 here) plus an additional $538,000 in block grants to other communion provinces. The budget also shows nearly $2.3 million in staff costs in the Anglican Communion budget lines, but that money covers members of The Episcopal Church staff who work with partners and program across the communion.

Echoing Curry’s distinction between a church’s institutional structures and the local incarnation of its mission, Jennings said her travels across the communion have shown her the communion “not as a series of dictates from archbishops or an office in London, but as life-giving, life-saving, mutual relationships rooted in dioceses, congregations and networks across the world.

“That is the Anglican Communion that deserves our energy and attention, our commitment and our resources,” she said.

The impact of Welby’s decision

Welby’s refusal currently effects two bishops and one bishop-elect in the Anglican Communion. Diocese of New York Bishop Assistant Mary Glasspool is currently The Episcopal Church’s one actively serving bishop who has a same-sex spouse. She is married to Becki Sander, her partner of more than 30 years.

The Rev. Thomas Brown is due to be ordained and consecrated on June 22 as the next bishop of the Diocese of Maine. He is married to the Rev. Thomas Mousin. The diocese elected Brown on Feb. 9. His election is about to enter the consent process canonically required in all bishop elections.

The only other active bishop in the Anglican Communion to whom Welby’s decision applies is Diocese of Toronto Bishop Suffragan Kevin Robertson, who married Mohan Sharma, his partner of nearly 10 years, on Dec. 28, 2018. The diocese congratulated him on his marriage, which was attended by Toronto Archbishop Colin Johnson and Toronto Bishop Diocesan Andrew Asbil. Robertson recently told Episcopal News Service that Welby told him in person earlier this month that Sharma would not be invited. Robertson and Sharma are the parents of two young children.

“I cannot overlook the fact that the Anglican Communion Office has created a public situation in which two children are learning that the hierarchy of the church considers their family to be a source of shame and worthy of exclusion,” Jennings said. “That makes me very angry. When little children are collateral damage, that is not the way of love.”

After Jennings concluded, she received a standing ovation from council and Curry replied, “Thank you, Madam President. Amen.”

Also on the meeting’s first day

* Executive Council also heard a report from Treasurer Kurt Barnes that showed the church ended the 2016-2018 triennium with between $5 million and $6 million more in income than it had in expenses, due in large part to the startup of some programs that was delayed to the current triennium. The Domestic and Foreign Missionary Society’s investment portfolio was down just more than six percent in 2018, Barnes reported, noting that the year was hard on all investments. Saying that the DFMS (the church’s corporate and legal entity) “will always look at the long term,” Barnes said the approximately $40 million investment portfolio’s 10-year annual average is 9.7 percent after fees and expenses.

The portfolio recovered 6 percent in January. “We just hope and pray that it continues for the remainder of this year,” said Barnes, noting that growth this year impacts the amount of money available to the church two years from now, because of the way the budget’s draw on investment income is calculated. Council member Diane Pollard cautioned that some investors fear that January’s investment markets performance was “kind of like Disneyland” and will not be sustained.

“In college I learned that Darwin only used survival of the fittest once or twice, but referred more to empathy and survival is greatest among those who place communal interest first.” Treasurer Kurt Barnes on Episcopal Church support for the Diocese of Cuba #excoun pic.twitter.com/8bQSgRkYY9

Barnes also told the council that the sale of a city block in Austin, Texas, that it had hoped would be the site of a new Archives of the Episcopal Church netted “on the order of $20 million” after paying off the debt on the land. The church is bound by a confidentiality agreement, typical for transactions of this type and magnitude, with the buyers to not yet disclose the purchase price. 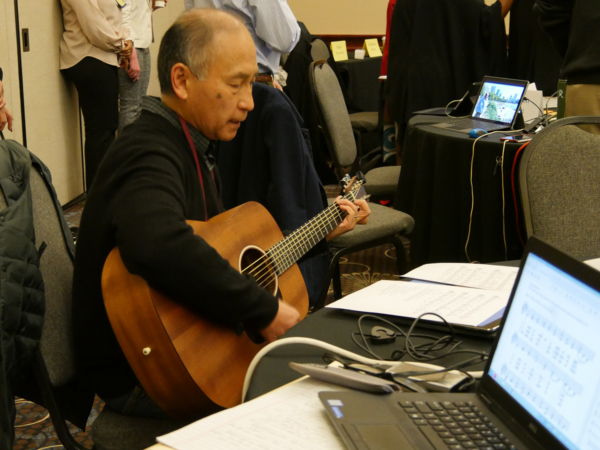 Diocese of Utah Bishop Scott Hayashi, an Executive Council member, provides music on Feb. 21 for the singing of “I want to walk as a child of the light” during Morning Prayer. Photo: Mary Frances Schjonberg/Episcopal News Service

After the opening plenary on Feb. 21, council spent the rest of the day meeting in its four committees. The same will be true the morning of Feb. 22. Later that day, council members will visit the Oklahoma City National Memorial and Museum. The memorial and museum commemorate the April 19, 1995, bombing of the Alfred P. Murrah Federal Building by Timothy McVeigh, an act of domestic terrorism that killed 168 people and injured 600 others.

Committee meetings will take up the morning of Feb. 23, and members will return to a plenary session that afternoon during which the committees will begin their reports to the full body, proposing resolutions for the full body to consider. The members will travel to St. Paul’s Episcopal Cathedral in Oklahoma City for Eucharist the morning of Feb. 24. The council will conclude its meeting that afternoon.

The Executive Council carries out the programs and policies adopted by the General Convention, according to Canon I.4 (1). The council comprises 38 members – 20 (four bishops, four priests or deacons and 12 laypeople) elected by General Convention and 18 (one clergy and one lay) by the nine provincial synods for six-year terms – plus the presiding bishop and the president of the House of Deputies. In addition, the vice president of the House of Deputies, secretary, chief operating officer, treasurer and chief financial officer have a seat and a voice but no vote.

The Feb. 21-24 meeting is taking place at the Sheraton Midwest City Hotel at the Reed Conference Center.