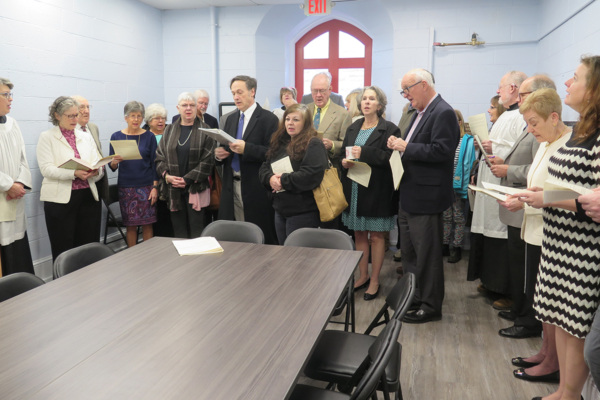 [Episcopal News Service] The Diocese of Southwestern Virginia gathered in Roanoke at the end of January for its 100th anniversary convention, which was capped by a lively Eucharist on Jan. 27 with Presiding Bishop Michael Curry, who heralded the moment as a time “to anticipate the future with revival.”

About an hour northeast of the 10,000-seat Berglund Center, where Curry preached, the diocese’s congregation in Lexington, Virginia, is hoping for a revival of its own – on a smaller scale, perhaps, but with the parish’s existence and identity at stake.

For more than 100 years, the congregation had been known as the R.E. Lee Memorial Church, a tribute to the Confederate general who served as a senior warden there after the Civil War. Facing pressure from Southwestern Virginia Bishop Mark Bourlakas and from like-minded parishioners, the congregation’s vestry narrowly voted in September 2017 to change the name back to its original Grace Episcopal Church, though that resolution left a wound that is still healing.

“We lost a lot of people,” the Rev. James Hubbard, interim rector, said in a phone interview. “A good number of the folks who left have come back slowly. Some have not. I’m sure some will never come back, but it was for all sorts of reasons.”

A year and a half later, the congregation is charting a way forward by emphasizing racial reconciliation. On Feb. 3, parishioners were in in a festive mood for the dedication of three newly renovated gathering spaces in the church’s undercroft, including a community room created as a “home base” for the congregation’s racial healing efforts through The Episcopal Church’s Becoming Beloved Community framework. 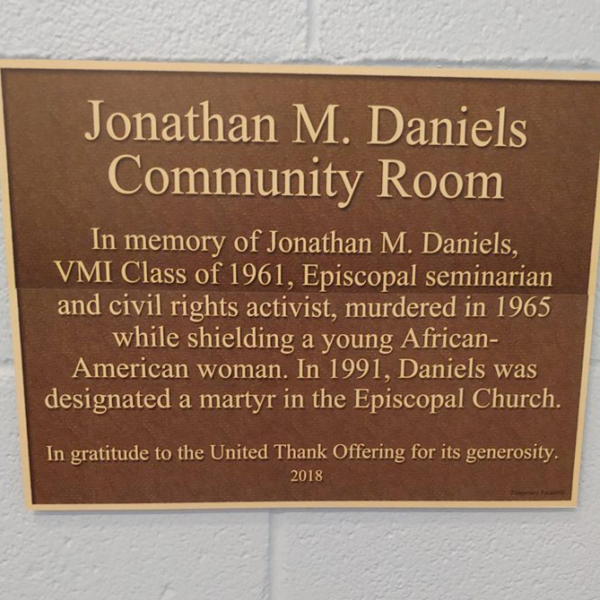 The dedication ceremony, held between the congregation’s two Sunday morning services, featured a Psalm reading and a blessing: “Lord God almighty … look with favor on your servants who will gather in this clean and simple space. Enable them to communicate truth, to foster love, to uphold justice and right, and to provide enjoyment. Let them promote and support that peace between peoples.”

Grace Episcopal Church’s community room, backed by a $47,000 grant from the United Thank Offering, or UTO, is named after Jonathan Myrick Daniels, a white Episcopal seminarian who was killed in 1965 while shielding a black girl in Alabama from a shotgun blast. Daniels attended the church in Lexington while he was a cadet at the Virginia Military Institute, and The Episcopal Church honors him as a martyr on his feast day, Aug. 14.

The UTO grant application noted that the congregation in Lexington “nearly came apart” in 2017 after two years of tense debate over its name. The process of congregational soul-searching began in the wake of the 2015 massacre at a black church in Charleston, South Carolina, by a racist gunman with a fondness for Confederate symbols.

“I think the general feeling in the parish is that we have come through a very bad time but are now on the other side of it – wiser and more sober-minded, I think, for having gone through it,” Anne Hansen, a former vestry member, told Episcopal News Service by email. 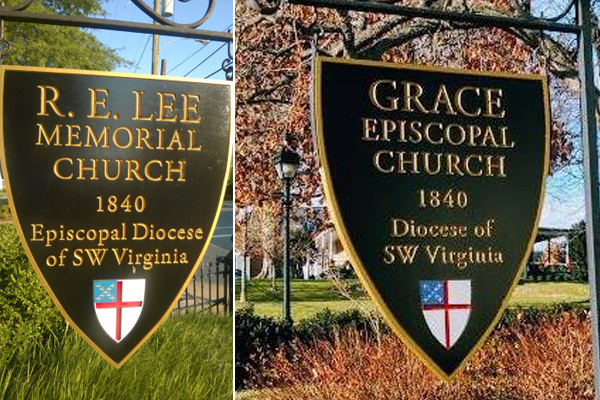 The congregation in Lexington, Virginia, changed its name from R.E. Lee Memorial Church to Grace Episcopal Church in September 2017.

Hubbard expressed hope that the congregation has begun moving past the bitter conflict over its identity and history. “I don’t think conflicts get wholly smoothed over,” he said, but “it’s a much happier place.”

The congregation took a big step forward in May when it invited monks from Holy Cross Monastery in West Park, New York, to lead parishioners in a healing and reconciliation workshop, Hubbard said. Church members who had taken opposing positions during the debate over the old name faced each other across the aisle of the church and asked for forgiveness.

“There were people with tears running right down their faces,” Hubbard said.

The congregation is working to add Beloved Community events to its schedule of activities in the community room. Even before the room’s dedication, the church had begun hosting events aimed at racial healing, such as a hymn sing that was joined by a half-dozen churches, black and white, in Lexington.

Grace Episcopal “is really solidly behind” the work of racial reconciliation, Hubbard said, adding that everyone also is still riding high after Curry’s rousing sermon at the diocesan convention.

“The parish is really pumped up, like the entire diocese is,” Hubbard said.