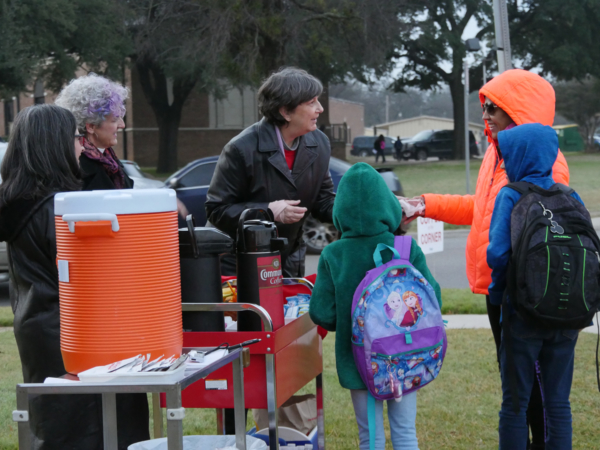 Donnell Guynn, a member of St. Luke’s in the Meadow Episcopal Church in Fort Worth, Texas, offers hot sausage biscuits to a mother and her children during a recent Coffee on the Corner morning outside the church. Pictured here in the background and across the street from the church is Meadowbrook Elementary School. Looking on, from left, are Adriana Cline, St. Luke’s bookkeeper and assistant diocesan treasurer, and the Rev. Karen Calafat, rector of St. Luke’s. Photo: Mary Frances Schjonberg/Episcopal News Service

[Episcopal News Service – Fort Worth, Texas] When you look out the window of your church and see kids and their parents walking past every morning on their way to neighborhood schools and a school bus stop, what comes to mind?

“We figured that there might be needs that we might be able to plug into,” said the Rev. Karen Calafat, rector of St. Luke’s in the Meadow Episcopal Church, of a discussion she and some parishioners had. They had some ideas, but they didn’t know whether those ideas would be helpful. “We were just looking for a way to connect, find out what their needs are and see if there was any way we could partner with them,” Calafat said. 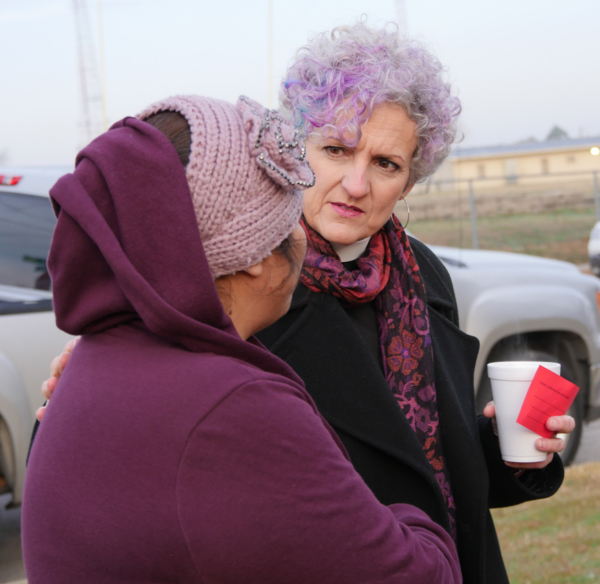 The Rev. Karen Calafat, rector of St. Luke’s in the Meadow Episcopal Church in Fort Worth, Texas, chats with a mother during the parish’s weekly Coffee on the Corner. Photo: Mary Frances Schjonberg/Episcopal News Service

That’s when their discovery that middle school students needed college logo T-shirts led to the every Friday morning Coffee on the Corner, a six-week experiment when it began in September and that has continued ever since.

Calafat and St. Luke’s member Donnell Guynn recently explained that trajectory one chilly Friday morning between serving coffee, cocoa, sausage biscuits and other treats. At a meeting with counselors at nearby Middlebrook Middle School, parishioners learned that the students needed the shirts for those days when they came to school out of uniform or on special days when they can wear such logo shirts.

That finding coincided with the church’s yard sale, so volunteers culled all the college logo T-shirts from the donations and gave them to the middle school. “It just started the conversation,” Calafat said.

At the same time, the parish was hosting another kind of dialogue, sponsored by Living Room Conversations, which helps people who disagree find ways to work together and respect each other. This past July, the monthly gathering at St. Luke’s discussed refugee families and the Trump administration’s zero-tolerance immigration policy. Eight “brave women” were present, Calafat said, and they decided that, while they knew little about refugees, they knew there were immigrants in their neighborhood. The women wanted to find a way to tell their neighbors that St. Luke’s “was not on the bandwagon” with the administration’s policies.

Three of the women got together to talk more, but “we realized we didn’t even know what the neighborhood needs,” Calafat said. “We can’t plan some big program because what if it’s not needed? So, we just honed it down to let’s stand on the corner and get to know the neighbors, give them a cup of coffee and just visit.” 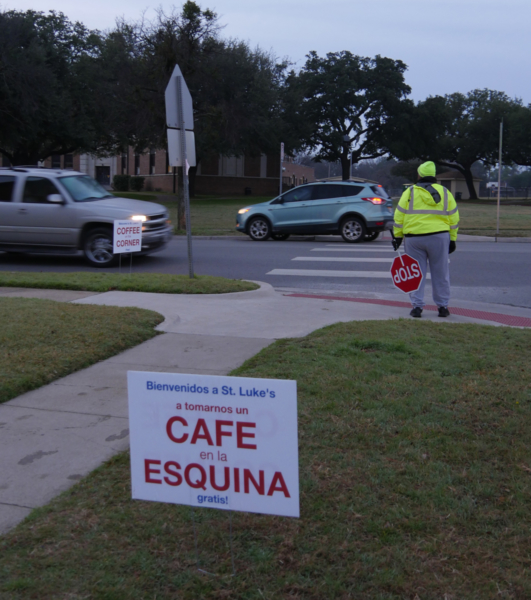 St. Luke’s has a strategic corner in the neighborhood. The area elementary school is across from the front of the church and the middle school is just down the side street. That side street is also where high school students wait, sometimes in their parents’ vehicles, sometimes on the sidewalk, for buses to take them to various buildings elsewhere in Fort Worth, including the district World Language Institute. The vestry is considering building a bus shelter for those high school students.

As the Fridays went by, the volunteers learned a lot. For instance, an early thought about offering English-as-a-second-language classes became a reality, but in reverse. The St. Luke’s women began asking the Spanish-speaking parents the Spanish names of some of the food they were handing out, such as bananas and oranges. The parents would quiz the volunteers in subsequent weeks to see if they remembered their translations.

One mother later suggested that the parents and parishioners continue trying to learn each other’s languages, and now the morning chats are becoming increasingly bilingual.

On a recent day, some Spanish-speaking students brought a newly arrived Asian friend with them. Then, two Rwandan sisters who walk their younger sister to the elementary school came by. The sisters, who speak five languages, according to Calafat and Guynn, often hang out around Coffee on the Corner before they go to school. 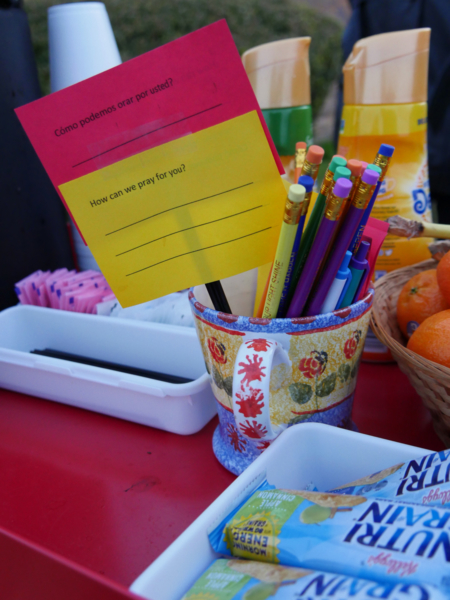 It’s not all about coffee and goodies. Prominent on a corner of the rolling treat cart is a brightly colored mug with squares of paper asking, “How can we pray for you?/Cómo podemos orar por usted?” The mug is the invitation; the volunteers never push anyone.

Calafat said she takes any filled-in cards that are left on the cart to her desk. “I just kind of keep them in front of me and lift them up in prayer, and when they come back the next week, we ask them how things are going,” she said.

One morning a woman visited, saying she had seen Coffee on the Corner but had never stopped. That day, she said, she needed prayers for her marriage. Three or four weeks later, she returned to say she and her husband had a good week. “It’s just about keeping track of people,” Calafat said.

Melissa Subjeck, the college and career readiness coach at Meadowbrook Middle School, stops by nearly every Friday when she drops off her daughter for pre-K classes. She likes to greet some of her middle school students as they take their younger siblings to the elementary school.

Subjeck praised both the parish’s initial effort to give college T-shirts to the middle school and the coffee stand. “I think this church is pretty remarkable,” she said. “This is one of the highlights of my Fridays. It starts you off in a good mood.”