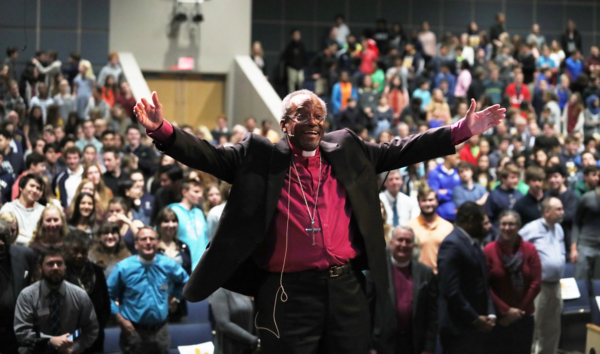 [Episcopal News Service] Presiding Bishop Michael Curry told students at Trinity Preparatory School on Feb. 1 that love can change the world, and them.

“God made us to be love and to love,” he said during a special assembly at the school in Winter Park, Florida, north of Orlando.

“If you think of love only as a sentiment, it is hard to see how it can have a great impact, but if you understand that that sentiment leads to commitment, a commitment to seek the good, the welfare, the well-being of the other” ahead of one’s own self-interest, Curry said, then “it’s a commitment that actually looks something like God, who the Bible says is love.”

Curry told the students what it was like to preach in May at the royal wedding of Prince Harry and Meghan Markle. Any wedding, he said, is “basically two people telling the rest of us that they love each enough to be committed together for the rest of their lives.”

“My brothers and sisters, that’s the power of love,” he said, to applause. “And that love had a power because the source of the love is actually God.”

The presiding bishop said, “Love has the power – I’m telling you it really does – have the power to lift you up when reality, life, will sometimes pull you down.” 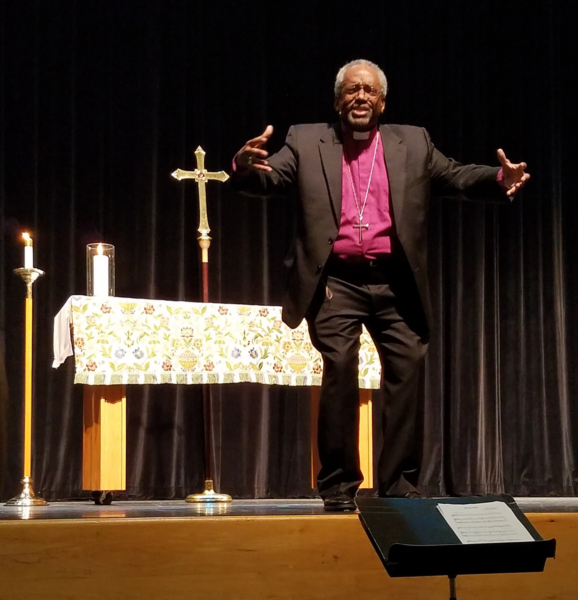 Curry told the students the story of Muffin the Ugly Cat who came to live with him and his wife early in their ministry in a mouse-overrun rectory. Muffin was getting beaten up by the other pets in her previous home, but the Curry family, including a German Shepherd dog named Bishop, took her in and loved her, the presiding bishop said.

Muffin soon began to hunt mice with a vengeance, sometimes leaving what the presiding bishop called her “tithe” in his slipper. One winter of Muffin on the prowl eliminated the mouse problem, he said.

Crouching like a hunting cat, Curry said, “This cat, as long as she was being mistreated and not allowed to be who the Lord put her on this earth to be, she was dysfunctional and dribbling and drooling and all that.

Curry said his grandmother used to remind him, “It is no secret what God can do. What he did for St. Paul, he can do for you.”

“My friends, I am here to tell you, it is no secret what God can do. What he did for Muffin, he can do for you.”

Continuing his visit to the diocese, in the evening Feb. 1 the presiding bishop will lead the diocese’s “Keep Saying Yes to Jesus Revival.” The event will be held at First Baptist Orlando. The diocese has said more than 4,100 people have registered to attend, and plans are being made to seat others in an overflow room at the church.

And he will preach during the 10:15 a.m. Eucharist Feb. 3 at the Episcopal Cathedral Church of St. Luke in Orlando.

From Central Florida, Curry is scheduled to head to the Diocese of Florida, headquartered in Jacksonville, Feb. 4-5.

On Feb. 6, Curry is speaking to the DART Clergy Conference. The Direct Action and Research Training Center, or DART, is a national network of 21 affiliated grassroots, nonprofit congregation-based community organizations. The center says its organizations, including faith communities, “bring people together across racial, religious and socioeconomic lines to pursue justice in their communities.” The network addresses problems “that affect large numbers of people and violate a basic sense of fairness, such as the lack of quality education or access to essential quality healthcare, criminalization of children and predatory lending.”