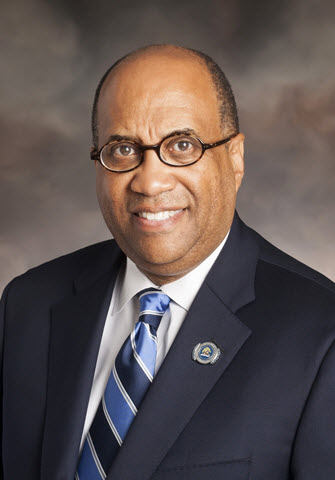 Ward, who became the 11th president and third Saint Augustine’s University alumnus to lead the university, said in his remarks to the board that he will be concluding his presidential position effective July 24, 2019, a position he has held since 2014.

“It’s now time for the Saint Augustine’s Renaissance to continue with a new chapter. I’m extremely grateful for the commitment exemplified by our students, staff, faculty and alumni,” he said. “Together, along with friends of the university, we conquered significant challenges with our eyes on the prize.”

Under Ward’s leadership, the university has achieved several goals. Most recently, the university was removed from probationary status by the Southern Association of Colleges and Schools Commission on Colleges Accreditation Agency in December. Along the way, donor supporter increased from $1 million in 2014, to $2.9 million in 2018.

Saint Augustine’s Student Body President Alston DeVega says he’s grateful for Ward’s vision and dedication to the university. “I’m immensely grateful to have had Dr. Ward as we did,” said DeVega. “He brought life back to the university, while getting us off probation. Our institution will never see another leader with the same expertise and poise, as Dr. Ward’s has exemplified.”

The Raleigh native told the members of the board that he was also proud of the university’s efforts in attracting some of the best and brightest young minds to the university.

Ward said the future is bright for him personally and for the University.

Founded in 1867 by the Episcopal Diocese of North Carolina, the mission of Saint Augustine’s University is to sustain a learning community in which students can prepare academically, socially and spiritually for leadership in a complex, diverse and rapidly changing world.