[Episcopal News Service] The public normally isn’t invited to breakfast, lunch and dinner at Incarnation Center in Ivoryton, Connecticut, its dining hall typically only catering to people attending retreats or conferences. That changed this month when the center launched a kind of pop-up feeding ministry for certain struggling members of the local community: federal employees.

Incarnation isn’t alone. Several Episcopal camps and conference centers across the country have begun offering free meals to some of the 800,000 federal workers who are missing paychecks because of the partial government shutdown, which now is approaching five weeks.

“It fits right into our mission and ministry as an Episcopal organization and simply as an organization that’s involved in our local community,” said the Rev. Dana Stivers, associate executive director and chaplain at Incarnation.

The center’s outreach is part of a broader effort that includes Episcopal congregations and other community organizations, Stivers said, adding that many of the Connecticut residents affected by the federal shutdown are tied to the Coast Guard, which has a station and its academy about a half-hour away in New London.

Incarnation’s Facebook post on Jan. 16 advertising free meals during the weekend generated overwhelmingly positive responses on the social network and some inquiries but no reservations from federal employees or their families, Stivers said. The center will extend the offer again this weekend, and other Episcopal conference centers are following suit.

Officials at Kanuga Conference and Retreat Center in Hendersonville, North Carolina, saw what Incarnation was doing and decided to open up their dining hall for federal employees all weekend, too. A Jan. 17 Facebook post extending that invitation has been shared nearly a thousand times, and some local media outlets picked up the story, helping to drive turnout.

Kanuga served about 50 meals to federal employees and their families in that first weekend, and interest seemed to pick up as the weekend progressed, said Jimmy Haden, Kanuga’s executive vice president for mission. The news coverage helped, he said.

To get the meals, the visitors were asked to make reservations in advance and then show a federal employee ID upon arriving for the meals. Most of the federal workers in the region around Kanuga work for the Transportation Security Administration, the Forest Service or the National Park Service. One woman, whose husband, a TSA employee, had been assigned temporarily to cover shifts in New York, asked if she still could bring her children for a meal. The family was invited to stop by Kanuga for any of the meals, and they came for two over the weekend, Haden said.

The TSA is among the federal agencies that have asked their workers to stay on the job without pay while the shutdown continues, with the promise that they will be paid for their time when government operations return to normal. Other employees have received furloughs, meaning they temporarily are out of work and may never see that lost pay back, unless Congress restores it retroactively.

The latest impasse over government spending has focused on President Donald Trump’s demand that Congress fund his proposed border wall. Trump wants $5.7 billion for that plan, and Democrats, though supportive of spending on border security, have refused to budge in opposition to a new barrier on the border.

Federal employees are caught in the middle as the shutdown, the longest in U.S. history, wears on with no end in sight. Episcopal institutions around the country are working to minimize the shutdown’s sting for some of their neighbors, especially in communities with large numbers of federal workers.

The Claggett Center in Adamstown, Maryland, is one example. The conference center is only about 45 minutes from Washington, D.C., and it began Jan. 22 offering free meals to federal employees who live nearby and normally commute to work in the capital city.

That first free lunch at the Claggett Center went without any visitors taking advantage of it, but Lisa Marie Ryder, co-executive director, said the invitation stands, at least through this weekend. The center will determine week to week whether it can continue offering the free meals, and Ryder expects they will continue, unless the dining hall is filled by guests attending an event.

“Just as Jesus invited others to come and join him at the table, there’s a place set for you,” she said.

Camp Stevens in Julian, California, and Lake Logan Conference Center in Canton, North Carolina, have said they will set a place for their neighbors as well. Such efforts are being touted by Episcopal Camps & Conference Centers, or ECCC, a network of 77 such sites.

“Welcoming furloughed families to meals being served at the retreat centers is a wonderful way to provide a meal that didn’t fit in these tighter-than-usual budgets, and take that one worry off of someone’s mind,” Ashley Graham-Wilcox, ECCC’s communications director, said in an email. “It’s a simple way for these camps and centers to be a part of the Jesus Movement.” 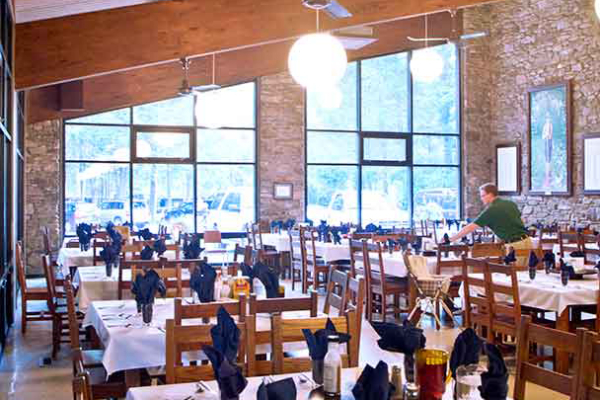 Kanuga has begun setting aside some of its dining room space for free meals for federal employees during the government shutdown. Photo: Kanuga

Regular conference guests at Kanuga, when told that federal employees had been invited to join them, went beyond offering vocal support, Haden said. Some even made unsolicited donations to help Kanuga cover the costs of the meals.

These conference centers, though, would prefer the free meals weren’t made necessary.

“We would hope [the shutdown] would end for their sake, because this is of no fault of their own,” Haden said, but until then, “we’re ready to extend this into the future as long as we can.”