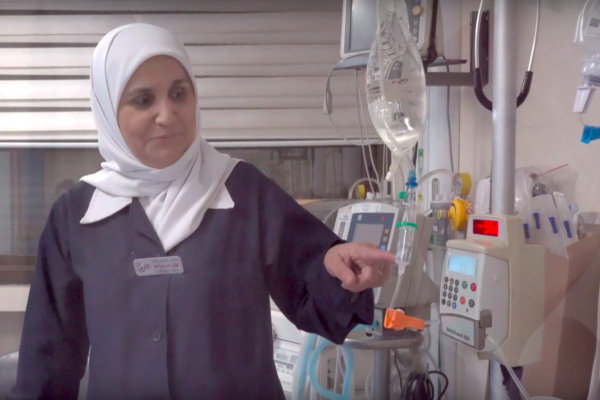 St. Luke’s Hospital is a charity hospital in Nablus, West Bank, run by the Episcopal Diocese of Jerusalem. Photo: AFEDJ, from video

[Episcopal News Service] An Episcopal congregation in the Diocese of Washington is rallying its parishioners and other churches to support an Anglican hospital thousands of miles away in the West Bank city of Nablus, where the loss of an ambulance could cost the charity hospital its accreditation, forcing it to close its doors.

St. John’s Episcopal Church, Norwood Parish, took a leading role last fall in raising money for St. Luke’s Hospital, a ministry of the Episcopal Diocese of Jerusalem, and by the end of the year, donors had pledged enough to pay for a new ambulance. 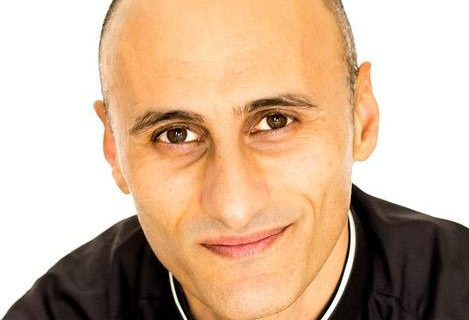 “The exciting thing wasn’t so much how much money. It was more the enthusiasm of the response from people around this,” said the Rev. Sari Ateek, rector at St. John’s Norwood in Chevy Chase, Maryland.

Ateek, a Palestinian Christian and son of an Episcopal priest, grew up in Jerusalem and moved to the United States at age 19 to attend college. He doesn’t return often to his native land, though in 2014, he led his congregation on its first Holy Land pilgrimage. Afterward, St. John’s Norwood began supporting the Episcopal Diocese of Jerusalem though contributions to American Friends of the Episcopal Diocese of Jerusalem, or AFEDJ, and the congregation now pays part of a nurse’s salary at St. Luke’s Hospital.

Last year, St. Luke’s was in a bind after the breakdown of its 15-year-old ambulance, which had been making more than 2,000 emergency trips a year. Not only did the hospital lose use of the vehicle, but the Palestinian Ministry of Health said at least one working ambulance was required to maintain the hospital’s accreditation. The Ministry of Health gave the hospital a February 2019 deadline to comply, and the hospital estimated it would cost $110,000 for a new ambulance, equipment, licensing and insurance.

“At first, I was amazed that the hospital only had one ambulance,” Ateek said. “It just became very clear that this was something we needed to do.”

After AFEDJ launched a fundraising campaign, Ateek wrote a letter in late November in his church’s newsletter detailing the hospital’s plight. He refrained from making a direct appeal to his parishioners for money, but several came forward with large donations, including one for $20,000. Those, combined with smaller donations, brought the total from St. John’s Norwood to $37,000.

Ateek obtained a list of churches of all denominations in the Washington, D.C. area that had given to AFEDJ in the past. He went down that list and reached out by email with personalized messages asking for contributions to pay for the ambulance. Among them, Washington National Cathedral pledged $10,000, and Grace Presbyterian Church in Springfield, Virginia, raised $13,000, bringing the total from Ateek’s ecumenical efforts to about $75,000.

With an additional $27,000 from the U.K.-based Anglican Communion Fund, AFEDJ had nearly met its goal for the ambulance campaign.

“People are hungry to do good work like this,” said the Rev. Anne Derse, a deacon at St. John’s Norwood, who served for six years as a U.S. ambassador, first to Azerbaijan and then to Lithuania.

Derse participated in the church’s 2014 Holy Land pilgrimage, a “life-changing experience” that prompted the congregation to form a Holy Land Committee. Part of the committee’s mission is to support humanitarian work that helps the neediest and most vulnerable residents of Israel and the Palestinian occupied territories.

St. Luke’s Hospital in Nablus and Al Ahli Arab Hospital in Gaza are just two of many such humanitarian ministries led by the Episcopal Diocese of Jerusalem.

“Those projects are wonderful Christian witness in the Holy Land because they’re open to anyone,” Derse said.

St. John’s Norwood has followed up with Holy Land pilgrimages every two years, and on the 2018 pilgrimage, participants visited St. Luke’s Hospital for the first time. That fueled the interest in paying for part of a nurse’s salary, and it later provided additional grounding for Ateek’s attempt to raise money for the ambulance.

“Honestly, the need speaks for itself,” Ateek said. “You have this hospital that we want to continue to serve the population, and we can solve this. … And we did, which is super exciting.”

Even with a new ambulance, AFEDJ emphasizes that financial struggles are an ongoing challenge at the Diocese of Jerusalem’s medical facilities, which face uphill battles to remain open for everyone who needs care, regardless of their ability to pay for that care.

Those struggles were underscored in December when a building collapsed at a surgical outpatient clinic on the campus of Al Ahli Arab Hospital. The 120-year-old building apparently was empty that afternoon at the time of the collapse, and no one was injured.

An engineer and construction team have surveyed the damage and recommended about $150,000 in reconstruction work, the diocese said. Jerusalem Archbishop Suheil Dawani has launched an appeal for donations to rebuild the clinic. 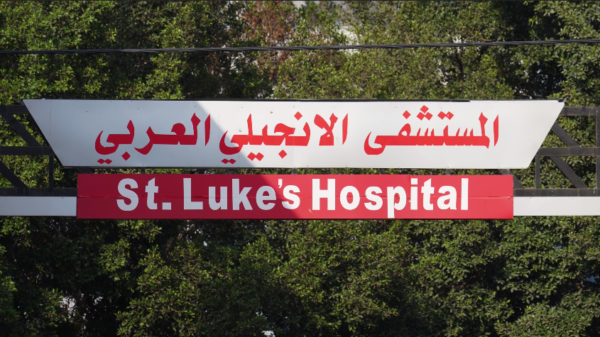 St. Luke’s Hospital in Nablus, West Bank, is one of two hospitals run by the Diocese of Jerusalem. The other is in Gaza. Photo: AFEDJ, via video.

“In Nablus City, we have five different hospitals. St. Luke’s Hospital is the only charitable hospital and the only church hospital in the West Bank,” Dr. Walid Kerry, executive director of St. Luke’s, said in a video produced by AFEDJ. “We are happy to give the medical care and surgery to everyone who asks for it, especially the needy and poor patients.”

The Episcopal Church has supported and remains closely engaged with the Anglican diocese’s work in Israel and the Palestinian territories for many years. The diocese is among the recipients of grants from The Episcopal Church’s Good Friday Offering, which collected a record $414,310 in 2017 to support ministries in the Middle East.

AFEDJ, an independent and nonpartisan nonprofit, is the recommend partner organization for Americans interested in supporting the work of the Diocese of Jerusalem, which covers Israel, Jordan, Lebanon, Palestine and Syria. Donations can be made at afedj.org/give.