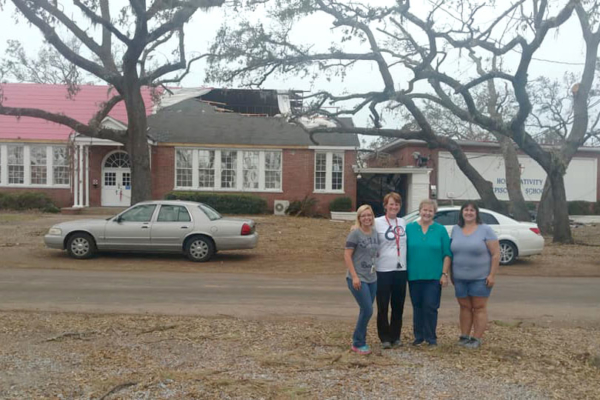 [Episcopal News Service] The Diocese of the Central Gulf Coast will welcome Presiding Bishop Michael Curry this weekend as he visits some of the Florida Panhandle congregations that still are rebounding from damage caused by Hurricane Michael in October.

Curry’s pastoral visit to the diocese will focus on congregations in and around Panama City, near where Michael made landfall Oct. 10 as a devastating Category 4 hurricane. At 155 mph, it was said to be one of the strongest hurricanes ever to hit the mainland United States. The diocese says eight churches were damaged by the storm, as well as one Episcopal school that still has not yet been able to return to its own classrooms.

“The presiding bishop’s visit with us this weekend will be a powerful reminder of the best of bonds between us, and that bond is love,” Bishop Russell Kendrick said in an emailed statement. “Together we are stronger, and we will continue to find new life.” 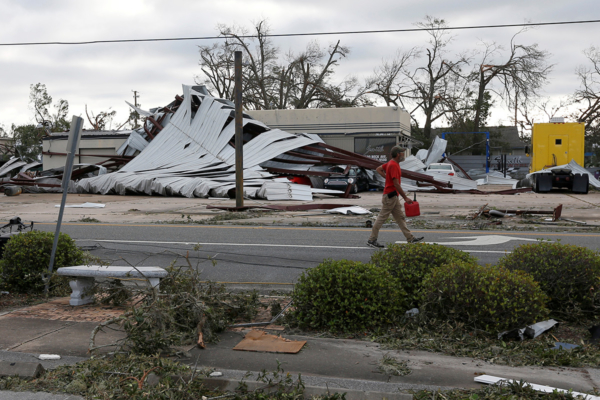 The scene on the ground looked bleak immediately after the storm, but three months later, the diocese expects to present Curry with stories of resilience and mutual support. Diocesan leaders paired unaffected congregations that had extra resources with those struggling the most during the recovery phase.

“The churches themselves, our congregations, are past the initial stages, whether it’s shock or just disbelief that it happened. They are building back their lives together,” Chris Heaney, the diocese’s emergency response coordinator, told Episcopal News Service by phone. “They certainly inspire me because they’re very much relying on each other.”

Hiring Heaney was one of the Kendrick’s first responses to the hurricane, just days after Michael struck, and Heaney coordinated the diocese’s efforts with help from Episcopal Relief & Development and local clergy who had lived through previous hurricanes. Heaney, senior warden at Christ Episcopal Church in Pensacola, to the west of Panama City, is a retired naval officer who was available to work full time on a six-month assignment for the diocese.

Heaney said the storm’s track spared most of those communities the severe flooding that hurricanes often bring, but the winds were intense, leaving roofs tattered, walls battered and trees down.

Sixteen congregations that weren’t affected by the storm were paired with the eight congregations expressing the greatest need for money, supplies, administrative support or volunteer labor. Heaney’s own Christ Episcopal Church and St. James Episcopal Church in Fairhope, Alabama, were assigned to support Holy Nativity.

“It can’t be easy, and every time I talk to them, they’re in good spirits dealing with hard things,” Heaney said.

The storm initially disrupted worship schedules, but none of the damage to the church buildings was severe enough to prevent any of the congregations from resuming services within two Sundays of Hurricane Michael’s landfall. They now are in the process of following up with insurance claims to complete repairs.

A more disheartening scene was found at Holy Nativity Episcopal School, which Heaney said was the property in the diocese in the worst shape after the hurricane. The wind was particularly destructive to the school’s second floor, severely damaging the walls, the roof and a bell tower.

Students aren’t expected to return to the school any sooner than fall 2019, Heaney said, but their education is proceeding. St. Thomas by the Sea in Panama City Beach offered space at the church for classes until the students were moved into temporary classrooms set up on the grounds of Holy Nativity Episcopal Church.

The school is one of the first stops on Curry’s two-day visit to the area. He will inspect the damaged school building Jan. 12, before making his way to two listening sessions with hurricane victims, one at Holy Nativity Church at 10 a.m. and the other at St. James in Port St. Joe at 3 p.m. He also is scheduled to preach Jan. 13 at St. Andrew’s in Panama City.

The pastoral visit comes just a month after Curry made a similar trip to the Diocese of East Carolina, which was hit hard by Hurricane Florence in September. There, he heard stories from Episcopalians of neighbors helping neighbors, and the stories of surviving natural disaster will continue this weekend in Florida.

“One thing that it seems that everyone in the area needs is the ability to just talk about what happened,” Heaney said.