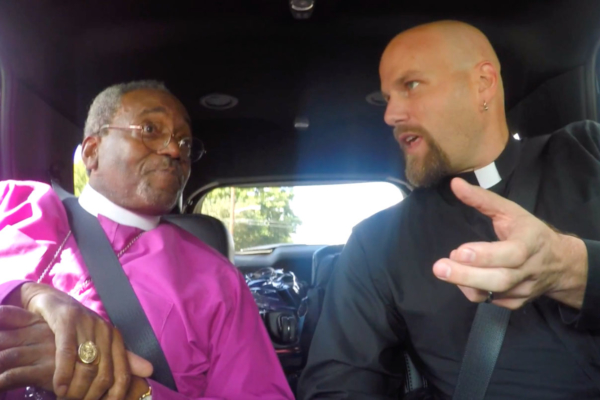 [Episcopal News Service] Texas is a big state with many miles of roads, so it need not be surprising that Episcopal clergy from at least two different Lone Star congregations – could there be others? – have produced separate online video series featuring priests talking in cars while driving places, sometimes to get coffee.

Think Jerry Seinfeld, but with clerical collars and no cursing.

Both video series have been modeled loosely after Seinfeld’s accurately named “Comedians in Cars Getting Coffee.” In the Diocese of Dallas, the Rev. Paul Klitzke’s “Clergy in Cars” series features a rotating cast of guest priests and bishops, including one episode featuring Presiding Bishop Michael Curry. In the Diocese of Texas, the Rev. Daryl Hay and the Rev. Matt Stone give their own faith-based takes on popular culture in “Clergy in Cars Getting Coffee,” which made a special appearance in July at General Convention in Austin.

“For me, what has been important is experiencing and creating these moments when people get to see clergy and priests are real people … the foibles and the humanity,” said Stone, curate at St. Andrew’s Episcopal Church in Bryan, Texas. Hay is the congregation’s rector.

On Klitzke’s series, those “real people” moments have included Curry talking in October about how his iPhone serves as a spiritual aid for scheduling Bible readings and reminding him of his monthly fasts.

“Anything can be used for good or ill, so our job as the people of God is to take it and let it be used for good,” Curry told Klitzke, rector at Episcopal Church of the Ascension in Dallas.

“It’s, like, an iPhone 5,” Stone said of his older-model device. “It’s definitely a priest’s phone.”

The idea for the video series had been bumping around in Hay’s head for a while, but “it was something I would never have done if Matt hadn’t been here. He made me do it.”

Stone, ordained as a priest a year ago, was a deacon when he joined St. Andrew’s in summer 2017. That September, he and Hay pushed “record” on their first Facebook Live video on the congregation’s Facebook page. The live viewership of that inaugural “Clergy in Cars” was tiny, but they were amazed when, over time, it amassed more than 4,000 replay views.

The congregation’s Facebook page also has increased its “likes” by about 25 percent over that period, another triumph that Hay attributes to the videos. (Those likes now are nearing 450, though the priests have since spun off the video series into its own Facebook page with nearly 300 likes.)

Though Hay and Stone sometimes invite guests along for the ride, including for special episodes of “Clergy Carpool Karaoke,” most videos are 10 to 15 minutes of the pair’s own priestly banter as they drive to Sweet Eugene’s, a coffee shop in College Station, Texas. Stone generally handles the technical side of things, with his iPhone stuck to the windshield, while Hay drives.

“For us, it’s been a way to engage popular culture and build some bridges,” Stone said. An early episode referenced movies, from “Star Wars” to “Love Actually.” “We want to help people build bridges between their faith and their everyday life.”

Facebook Live offers the added benefit of allowing real-time engagement, Stone said, and they invite viewers to join them at the coffee shop when the camera stops recording, creating an opportunity for real-world connections.

There is no regular schedule for the videos at this point, though at minimum they are seasonal, with an episode last month for Advent and another planned around Ash Wednesday for Lent. One of Stone’s favorite moments, though, wasn’t gabbing in a car but rather interviewing Doyle at General Convention and getting the bishop’s impression of Big Tex, a 50-foot statue and icon of the State Fair of Texas.

“It was just wonderful,” Stone said. “Getting behind the curtain with a bishop, for me that was something really unique and special. We’re letting people see something they might not otherwise.”

Klitzke shares his cross-Texas counterparts’ interest in social media experimentation as a tool for spiritual enrichment and evangelism, though he also sees his video series in Dallas as a window into what clergy talk about when they talk with each other.

In cars. And clergy in Texas spend a lot of time in cars.

Klitzke and the Rev. Rebecca Tankersley, associate rector at Episcopal Church of the Transfiguration in Dallas, were driving back from a preaching conference when their discussion turned to the topic of what makes for a typical clergy-to-clergy discussion.

“We were having these great theological conversations … everything from serious theology down to fun whatever,” Klitzke recalled. That’s when he first hatched the idea for “Clergy in Cars.” “Why not try to capture what this looks like? And my hope was it would make the whole church more accessible to people.”

After launching the series in August with the Rev. Leslie Stewart of Resurrection Episcopal Church in Plano, Texas, as his first guest passenger, Klitzke scheduled about one 15-minute episode a week, posting every Tuesday to YouTube and Facebook. More recently he has been averaging about one new episode a month.

Most of the videos have a few hundred viewers, sometimes a thousand, but the episode featuring the presiding bishop went “viral” and topped 20,000 views. Interviewing Curry was “a joy,” Klitzke said, but he also clearly had fun asking Dallas Bishop George Sumner in the show’s second episode whether the bishop preferred tacos or BBQ after three years in Dallas.

“I really, really like the tacos,” Sumner said. “However, after three years, I’ve liked them too much, and I am on my low-carb phase. … It’s all brisket right now.”

After that light-hearted opening, Klitzke and Sumner shifted away from the culinary and got deeper into to the theological, a format that the show has repeated with fellow Episcopal priests and a diverse lineup of clergy from other faith traditions.

One question Klitzke tries to ask all his guests is what they see as the preeminent social issue facing people of faith today.

“It was something I had been wrestling with,” he said. “I have found the variety of answers to be really meaningful.”

Unlike Hay and Stone, Klitzke prerecords his videos rather than stream them live. His gear is just a windshield-mounted GoPro camera. After some complaints about the audio quality, he also invested in a better microphone.

The equipment isn’t as important as the content of the conversation, though Sumner’s answer to Klitzke’s question about social issues took on the spiritual cost of technology.

“I think that one of the great issues of our time is the way in which technology continues to mean that machines intervene between us as we try to relate to one another as humans,” Sumner said. “These machines will actually change our brains, but I think they also affect our souls.”

The fact that such dialogue happened in a car instead of a church may be irrelevant to the clergy on camera, but by sharing with his audience, Klitzke hopes to breathe new life into “the way we do formation.” He and his guest are modeling theological reflection, in a way, for those who may be interested in doing the same.

“To me, it’s an extension of preaching and teaching,” he said.

And if anyone thinks the resemblance to Seinfeld’s much-more-polished Netflix production might be a coincidence, Klitzke has no problem setting the record straight.

“It’s a complete knockoff,” Klitzke said, with at least one obvious exception. “I tell people, I can afford a cup of coffee, but I can’t afford a film crew.”