[Episcopal News Service] Take a centuries-old tradition. Find a church with a big front lawn on a busy street. Get a priest who is also a carpenter. Recruit volunteers – lots of volunteers. Get your friends to donate costumes. Figure out who has farm animals. Get the bishop to deliver some hay.

Put it all together, and it’s the living nativity scene at St. Andrew’s in the Valley Episcopal Church in Harrisburg, Pennsylvania, that was staged Dec. 19 from 5 to 7 p.m.

If the estimated 300 people who drove past the scene, and those who took advantage of the chance to get a photo with St. Nicholas, learned something about Jesus and the nativity and realized that “the heart of the season is open to them,” then the effort was a success, Central Pennsylvania Bishop Audrey Scanlan told Episcopal News Service.

If those folks make the connection that what she called this “creative and novel” effort came to them via the Episcopal Church, “that’s bonus to me.”

The living nativity was the December edition of Scanlan’s “Bishop Out of the Box” series, or BOTB, an effort to show Episcopalians how they experiment with new kinds of evangelism by thinking outside the box.

The Rev. Nelson K. Baliira, St. Andrew’s rector, said in an interview the morning after the event that he hoped the living nativity scene showed that “the Episcopal Church is a living church” in which “we are not telling our own story, we are telling the story of Jesus.” It is a story, he said, that must be told to the world over and over again.

The effort was part of Scanlan’s ongoing invitation to local Episcopalians to live out the Gospel in new and creative ways and encourage them to collaborate across parish lines. “This is a project that has taken people from the cathedral. It’s involved farmers from across the diocese,” she said. “It’s involved people from four or five different parishes who have agreed to come together to be shepherds and angels.”

The living nativity scene also attracted the attention and work of some young people “who don’t necessarily go to church all the time,” Scanlan said. Some of them took turns portraying Mary and Joseph so no one has to be outside for a long time in the winter night.

Altogether, about 40 people volunteered to make the event happen, according to the Rev. Dan Morrow, canon for congregational life and mission, who had suggested the living nativity idea. He explained that St. Andrew’s, with that big front lawn and 30,000 cars driving past each day, was a great location for something he’d been wanting to do for years.

To publicize the nativity scene, the diocese rented a large orange digital highway construction warning sign and parked it on the side of the street by the church’s sign, with the message, “Live nativity here 5-7 December 19.”

Baliira, a bi-vocational priest who grew up in Uganda, put his skills as a carpenter to work to build the crèche with the help of Steve Guszick, a member of St. Stephen’s Episcopal Cathedral in Harrisburg and the husband of Alexis Guszick, diocesan canon for communications. Morrow gave Baliira a photo of a crèche and, the carpenter priest told ENS, “I knew exactly what I needed to do” to get it built.

He joined together wood pallets from a local roofing company for the floor and built the back and sides with plywood and two-by-fours. The roofing material came from Home Depot, Baliira said. 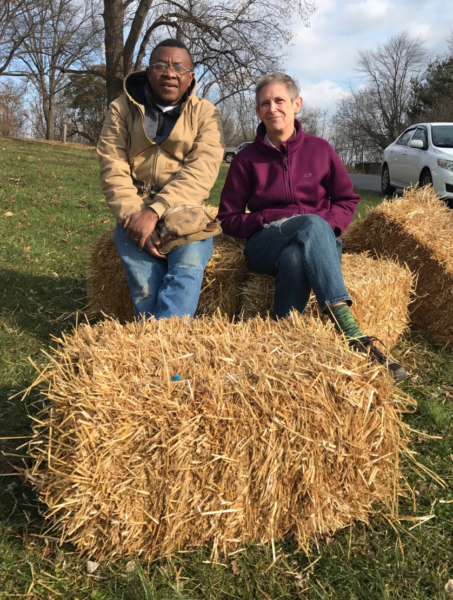 The Rev. Nelson K. Baliira, left, rector of St. Andrew’s in the Valley, was building the manger for the living nativity scene Dec. 17 when Central Pennsylvania Bishop Audrey Scanlan drove up in her pickup truck to deliver the needed hay. Photo courtesy of Nelson K. Baliira

“We put everything together in four hours” on a drizzly Dec. 15, he said. Scanlan delivered the hay in her pickup truck on Dec. 17 while Baliira was building the manger.

The evening of Dec. 19, between 70 and 80 cars, each filled with adults and children, drove up the church’s quarter-mile-long driveway to view the tableau. Some got out of their cars to pet the goats and donkeys, and one dog, and to talk to the participants.

Then they drove on to where the driveway forks and saw a sign inviting them to stop at the church for cookies, hot cocoa and a visit with St. Nicholas and Scanlan. Ryan Tobin, a young man who is the junior warden of St. Stephen’s in Harrisburg, played St. Nicholas. “He’s an experienced St. Nicholas,” Scanlan said. “He’s done this before.”

Tobin was vested as the bishop that St. Nicholas was, rather than the Santa Claus that his life inspired. The point was to show that Nicholas and Scanlan are “part of that same big family,” Morrow said. A history of the St. Nicholas-Santa Claus connection, written by the St. Nicholas Center, was available.

Along with his traditional gift of gold (chocolate) coins, St. Nicholas handed out candy canes that young people at the diocesan fall youth retreat had decorated to look like croziers.

The organizers also distributed an invitation “to reflect on the gift of Jesus Christ at Christmas,” Morrow said.

Baliira, who had seen living nativity scenes in his native Uganda, said the one on St. Andrew’s front lawn seemed alive with the presence of God.

“We were away from the malls,” he said with a chuckle. “We were in our little village of St. Andrew’s” with animals and people out in the quiet night air.

“The noise was the noise of the donkeys and the other animals” that reflected “the natural beauty in which the Lord Jesus came to visit us and be part of us,” he said.

Part of a bigger plan

BTOB began in September with an agape love feast in Riverfront Park along the Susquehanna River that runs through Harrisburg. Scanlan said participants asked passersby if they needed prayers and, if so, invited them to pray with them.

“A lot of churches in this day and age have a lot to be anxious about: numbers, dwindling finances, the building, clergy shortages,” Morrow said. “One of the things we found is that, given all those things to worry about, given all the anxiety, sometimes what suffers is creativity and imagination.

Scanlan said their travels are part of her vow to live the sermons she’s been preaching around the diocese this year. She speaks about Presiding Bishop Michael Curry’s call to the Way of Love. She said she echoes his sense that God calls people “not just to the places where we’re comfortable but to go to places that sometimes make us uncomfortable and that are challenging for us, because God often needs us there even more.

“So, in standing up in the pulpit and telling people to do this, I’m also trying to model it for them; kind of walk the walk and say, ‘well, I’m going to do this, even if it makes me uncomfortable as well. We can walk together in this.’”

Also in September, BOTB did a prayer walk through the Bloomsburg Fair. When diocesan convention convened in Williamsport in October, BOTB staged a walk through the downtown “to warm up the city to us being there,” she said. Participants went to the emergency room and the bus station to pray with people.

The day before Thanksgiving, BOTB was at the Central Market in Lancaster, asking shoppers what they were thankful for and what gives them hope.

In January, BOTB will be in the Allison Hill neighborhood of Harrisburg to celebrate Martin Luther King Jr. The area is predominantly African-American, with refugees and immigrants living there as well. People will be invited to help paint and color in an outline of King on a giant canvas and use a big blackboard to answer the question, “What is your dream?”

The monthly travels have become popular, Scanlan and Morrow say. “People are kind waiting for us to come to them, and when we get there we’re inviting them to come along and they’re proud and happy to be part of it,” she said.