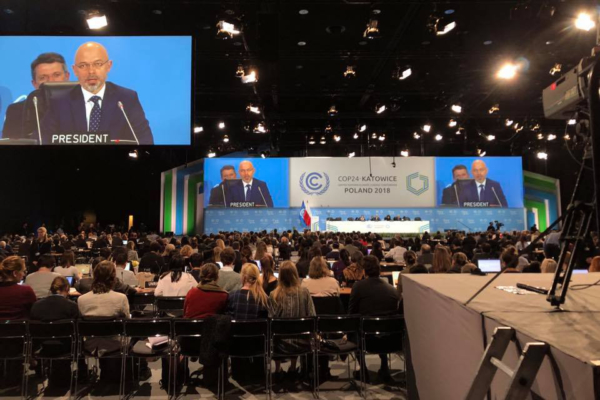 [Episcopal News Service] A delegation of Episcopalians who represented Presiding Bishop Michael Curry at this month’s United Nations climate conference in Poland is heralding the conference members’ agreement on next steps toward reining in global warming – and the successful resolution of a key impasse over word choice.

The Episcopal delegation “bore witness to significant developments in international climate change policy,” the delegation’s leader, California Bishop Marc Andrus, said this week in a written statement about the conclusion of COP24, known officially as the 24th Conference of the Parties to the United Nations Framework Convention on Climate Change.

Nearly 200 countries met Dec. 2-14 in Katowice, Poland, with the goal of developing a framework for implementing the 2015 Paris Agreement, which seeks to keep global warming under the threshold of 2 degrees Celsius that scientists predict is necessary to prevent a spiraling catastrophe of melting glaciers, rising sea levels and related weather extremes.

Andrus said most member nations “acknowledged the need to ramp up ambitions for reducing carbon emissions, while also attending to a ‘just transition’ for the most heavily impacted countries who are also the most under-resourced for adaption.”

“Our common efforts didn’t consist solely of producing texts or defending national interests,” Kurtyka said in an online statement. “We were conscious of our responsibility to people and commitment for the fate of Earth, which is our home and the home of future generations who will come after us.”

Andrus was joined for both weeks of COP24 by Lynnaia Main, the Episcopal Church’s representative to the United Nations, and Andrus’ wife, Sheila Andrus, an ecological entomologist representing the Diocese of California.

The rest of the delegation was split between the conference’s two weeks, with the first week including the Rev. Lester Mackenzie of Laguna Beach, California; Alan Yarborough, Office of Government Relations communications officer, and the Rev. Melanie Mullen, the Episcopal Church’s director of reconciliation, evangelism and creation care. For the second week, they handed off to Andrew Thompson, an environmental ethicist at Sewanee: The University of the South, and Jack Cobb, Office of Government Relations domestic and environmental policy adviser.

“Our delegation, through our meetings with negotiators, our presentations and our side events, worked tirelessly to bring our church’s own unique voice to COP24,” Andrus said. They also participated in panel discussions, conferred with ecumenical partners and joined worship and prayer services.

#COP24 Day 10: The Presiding Bishop's delegation hosted a "Spirit of Apollo 8" event, attended side events and gathered for a final dinner. Thank you to Bishop Marc and Sheila Andrus for their leadership of this COP24 team. Dziękuję, kochamy Cię! #EpiscopalClimate #EpiscopalUN. pic.twitter.com/b0WrLdC8CO

One of the highlights of the delegation’s second week at COP24 was a statement it drafted to join a chorus of support among partner delegations for a climate science report by the International Panel on Climate Change, or IPCC. Most COP24 member parties had sought to “welcome” the IPCC report, but that wording raised objections from the United States, Russia, Saudi Arabia and Kuwait.

“The United States was willing to note the report and express appreciation to the scientists who developed it, but not to welcome it, as that would denote endorsement of the report,” the U.S. State Department said in a statement quoted by the Associated Press. “As we have made clear in the IPCC and other bodies, the United States has not endorsed the findings of the report.”

That response “was far from adequate to forward the climate action needed now,” Andrus said. He wrote an initial draft of an Episcopal delegation statement, and he and his team spent five hours revising it until it was ready to present to the U.S. delegation on Dec. 11.

The statement referenced resolutions passed by the Episcopal Church’s General Convention and invoked some of the consequences of climate change already being experienced across the church, from rising sea levels to wildfires.

“It was a clear stand based on the Episcopal Church’s policy and actions to say that words matter and that the science-based goals of a global climate agreement, which can avert the worst climate impacts, also matter,” Andrus said.

In the end, COP24 member parties adopted language that “appreciated and expressed gratitude” for the IPCC report while urging all parties to make use of its findings.

“What I hope Episcopalians will know from our small, singular experience in Katowice is that their voices matter,” Andrus said, and he encouraged anyone interested in these issues to follow the Episcopal Public Policy Network. “Advocacy is the way we express our faith in action.”