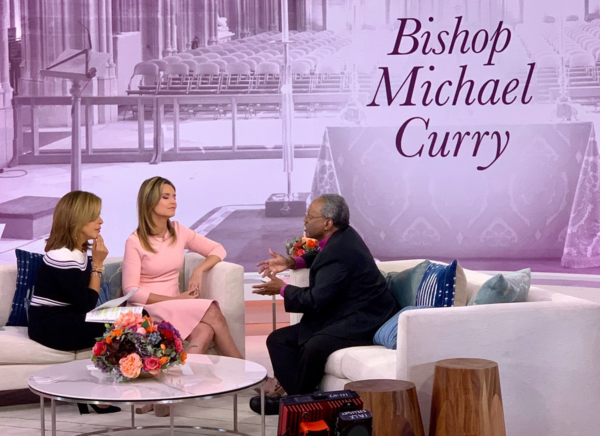 “Today Show” co-hosts Hoda Kotb, left, and Savannah Guthrie listen Nov. 1 as Presiding Bishop Michael Curry talks about the power of love. It was one of many media interviews Curry gave this year. Photo: “The Today Show”

[Episcopal News Service] The Episcopal Church has heard Presiding Bishop Michael Curry herald the message of God’s unconditional love ever since he was elected in July 2015. In May, his message went global and viral when he preached at the royal wedding of Prince Harry and Meghan Markle, and now it has earned him the title of “religious newsmaker of the year.”

The Religion News Association said that Curry’s sermon had “raised his profile as a progressive religious voice.”

That could be an understatement. Curry’s profile beyond the Episcopal Church began to take off the moment his part in the May 19 wedding was announced. Stories attempting to answer the question “who is Michael Curry” abounded.

Then, he stepped to the ambo at St. George’s Chapel and began to preach. According to media statisticians, 29.2 million people in the United States and 18 million in the United Kingdom viewed the wedding. And then there was Twitter, where 3.4 million social media users tweeted about the royal wedding. They tweeted 40,000 times a minute during Curry’s sermon, more than the 27,000 tweets per minute during the declaration of Harry and Meghan as husband and wife.

That day, “Bishop Michael Curry” was a top “trending topic” on Google with a score of 100 on a scale of 0-100 for daily searches, and “episcopal” was the top lookup on Merriam-Webster.

There was even a spoof of the presiding bishop on “Saturday Night Live” that night, one of the few times that the show has featured a living religious leader.

Since then, Curry has combined his normal travels around the Episcopal Church with a round of media interviews to continue preaching the message of unconditional love. It has been a whirlwind, ranging from multiple appearances on “The Today Show” to “The View” to NPR and more. They were squeezed into an already busy schedule of travel within the Episcopal Church and his more public appearances such as a prayer service and procession of public witness in Washington, D.C., participation in the Dec. 5 funeral for George H.W. Bush and the Dec. 11 commemoration of the Apollo 8 mission.

These days, it is hard for Curry to walk down the street or through an airport without being recognized and stopped, but it is a phenomenon that he welcomes.

“I was surprised by all the attention after the royal wedding,” Curry recently told “The Today Show’s” Voices series, reflecting on what the show called “his viral moment and newfound celebrity.”

“I really didn’t expect that,” Curry said. “But what I’ve been more surprised by has been that what resonated was the message of love. It wasn’t me. I mean, I delivered it. But it was actually the message of love. That’s what people have stopped me on the street or at the airport to talk about — after we take the selfie, of course.”

Nancy Davidge, Episcopal Church public affairs officer, told Episcopal News Service that Curry was “undoubtedly one of the most powerful religious voices of 2018” who deeply touched both Christians and non-Christians. “His message of love transcended political divides and controversies and deeply moved millions,” she said.

“In a year when top religion news stories were about deep suffering and despair, Presiding Bishop Curry’s message of love motivated millions. While some know him only as ‘the wedding preacher,’ his message touched them deeply. As Bishop Curry reminds us, if it doesn’t look like love, it does not look like Christ.”

During 2018, Davidge said, the presiding bishop amassed a global potential audience reach of more than 17 billion and generated around 9,700 media mentions, including by every major media outlet in the United States. This generated nearly 17 billion unique visitors per month online and a print/broadcast audience reach of around 131 million, she added.

About two months after the royal wedding, Curry announced that he had prostate cancer and took about six weeks off for what was successful surgery and treatment.

In October, Avery, an imprint of Penguin Random House, published “The Power of Love: Sermons, Reflections, and Wisdom to Uplift and Inspire,” which includes the royal wedding sermon, three of Curry’s sermons from General Convention events this past summer, and the sermon he preached at his installation on Nov. 2, 2015. “The world has met Bishop Curry and has been moved by his riveting, hopeful, and deceptively simple message: love and acceptance are what we need in these strange times,” the publisher says in its online description.

Religion News Association members have voted in the annual poll for decades. RNA is an international association for journalists who write about religion in the news media. It offers training and tools to help reporters cover religion with balance, accuracy and insight.

Following Curry in a close race for second and third place for religious newsmaker of the year were famed evangelist Billy Graham, who died this year at age 99, and Pittsburgh Rabbi Jeffrey Myers, who emerged as a voice of lament and peace after the Tree of Life shooting.

The other four religious newsmakers were Rachael Denhollander, who emerged as an outspoken advocate for victims of sexual misconduct in churches and whose victim-impact statement — balancing justice with forgiveness — at the sentencing of pedophile doctor Larry Nassar went viral; Archbishop Carlo Maria Viganò, who rocked the Catholic Church with hotly disputed contentions that Pope Francis covered up sexual abuse and should resign; Supreme Court Justice Brett Kavanaugh, who drew strong support from religious conservatives in a confirmation dominated by an explosive allegation of attempted rape as a teen, making it a signature case in the #MeToo movement; and megachurch pioneer Bill Hybels, who retired early from Willow Creek Community Church amid accusations of sexual misconduct.

The poll also ranks the top 27 religious news stories of the year. The Pennsylvania grand jury report accusing 301 Catholic priests of sexually abusing at least 1,000 minors led that list, and the poll notes that probes by the U.S. Justice Department and other states began in the wake of that news. Cardinal Donald Wuerl, faulted for his past role as bishop of Pittsburgh, resigned as Washington archbishop because of the report.

Religion Newsmaker of the Year honors went to Episcopal Church Presiding Bishop Michael Curry, whose sermon at this year’s royal wedding "stole the show," according to the British press, and raised his profile as a progressive religious voice. https://t.co/lKvM8FLflB pic.twitter.com/MunLmSo6Rm