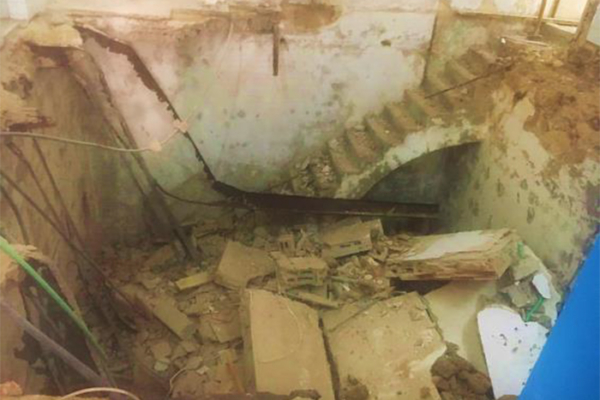 The Episcopal Diocese of Jerusalem released this photo of the ruins of the Anglican diocese’s surgical outpatient clinic at the Al Ahli Arab Hospital in Gaza.

[Episcopal News Service] A building collapse at a Gaza clinic run by the Episcopal Diocese of Jerusalem has the Anglican diocese’s supporters around the world scrambling to raise money for repairs at a time when Palestinian relief efforts have been hindered by cuts in humanitarian aid.

The building that collapsed Dec. 6 was a surgical outpatient clinic at the Al Ahli Arab Hospital. Steel beams, roof decking, plaster ceiling and surrounding walls caved into the room and then collapsed into the basement below, a dramatic implosion that was partly caught on video.

The 120-year-old building apparently was empty that afternoon at the time of the collapse, and no one was injured.

“If the facility had been occupied during that time, there might have been fatalities,” the Diocese of Jerusalem said, according to Anglican Communion News Service. The report said “environmental stress” was partly to blame.

Jerusalem Archbishop Suheil Dawani has launched an appeal for donations to rebuild the clinic, which is just one building on the hospital’s campus. Up to 500 patients a month typically use the clinic, and they have been directed to other parts of the hospital for treatment. 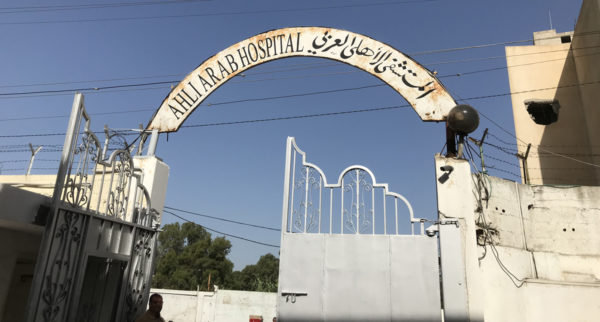 Al Ahli Arab Hospital has been ministering as a Christian witness in Gaza City since 1882. The institution was founded by the Church of England’s Church Mission Society and was later run as a medical mission by the Southern Baptist Conference from 1954 to 1982. It then returned to the Anglican Church. Photo: Mary Frances Schjonberg/Episcopal News Service

An engineer and construction team have surveyed the damage and recommended about $150,000 in reconstruction work, the diocese said.

“Their findings provided useful insights about the deficiencies of the bar joists in the clinic that were manufactured between 1900 and the late 1950s, and still being used well after 1960,” the diocese said. “These were the chief culprits behind the catastrophic failure of the building – but so were the infrequent renovations, the latest occurring in 1993.”

The Episcopal Church has supported and remained closely engaged with the Anglican diocese’s work in Israel and the Palestinian territories for many years. The diocese is among the recipients of grants from the Episcopal Church’s Good Friday Offering, which collected a record $414,310 in 2017 to support ministries in the Middle East.

The Al Ahli Arab Hospital is one ministry that benefits from that money, and Presiding Bishop Michael Curry personally visited the hospital in March while on a pilgrimage to the Holy Land during Holy Week.

“The number of Christians in Gaza are decreasing dramatically, but the witness to the way of Jesus is as strong as ever because at Al Ahli Arab Hospital healing happens – Muslim, Christian, anyone who needs it, healing happens,” Curry told Episcopal News Service after visiting the hospital. “And that is the way of Jesus. That is what love looks like. That is what the sacrifice on the cross was about.” 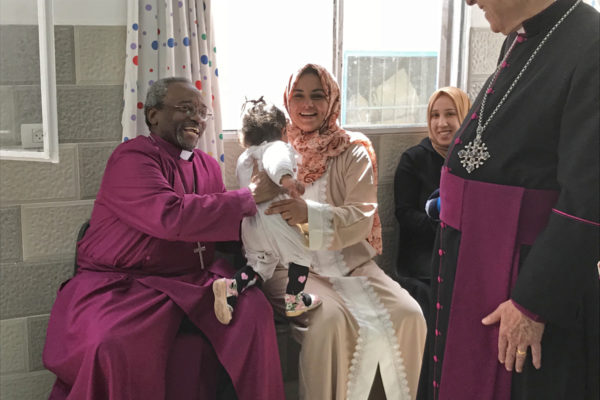 Presiding Bishop Michael Curry hands a toddler back to her mother in March while visiting a session for mothers and their young children at Al Ahli Arab Hospital in Gaza City. Jerusalem Archbishop Suheil Dawani is at right. Photo: Mary Frances Schjonberg/Episcopal News Service

In November, Curry joined leaders in the Evangelical Lutheran Church in America and the United States Conference of Catholic Bishops in raising concerns about the Trump administration’s apparent decision to end further humanitarian assistance to hospitals in East Jerusalem, including the Diocese of Jerusalem’s Princess Basma Rehabilitation Center.

“These hospitals provide life-saving and, in some cases, unique forms of health care not available otherwise to Palestinians,” the religious leaders said in a joint statement.

The statement did not address conditions at the Al Ahli Arab Hospital in Gaza, but the situation there is dire, said John Lent, executive director of American Friends of the Episcopal Diocese of Jerusalem, or AFEDJ.

“All of Gaza is on a timeline that requires urgent intervention, politically, socially, economically. It’s really a completely unsustainable situation that the Gazans are living in, and Ahli’s right in the middle of it,” Lent said in an interview with Episcopal News Service.

Electricity in Gaza is intermittent at best, sewer systems have failed and running water is no longer available in most homes, Lent said. The Gaza Strip is governed by the Palestinians but largely cut off from the outside world by an Israeli blockade. It also is home to Palestinian refugee camps. This year, the U.S. announced it was ending its aid to the United Nation program that supports those Palestinian refugees.

The Ahli hospital is the only nongovernmental, charitable hospital ready to treat them and all Gaza residents, Lent said. “Ahli is a very special place, given the people that it serves,” he said. “In some neighborhoods, it looks as though they’re stone age.”

The hospital has struggled just to keep its doors open, Lent said, and maintaining deteriorating buildings only adds to that burden. “When I visit, I can tell you that everything at Ahli is simple, spare, clean and efficient, but very old.”

AFEDJ, an independent and nonpartisan nonprofit, is the recommend partner organization for Americans interested in supporting the work of the Diocese of Jerusalem, which is spread over five countries – Israel, Jordan, Lebanon, Palestine and Syria. The organization has launched its own appeal to raise additional money to support the Diocese of Jerusalem and the hospital in Gaza. Donations can be made at afedj.org/give.