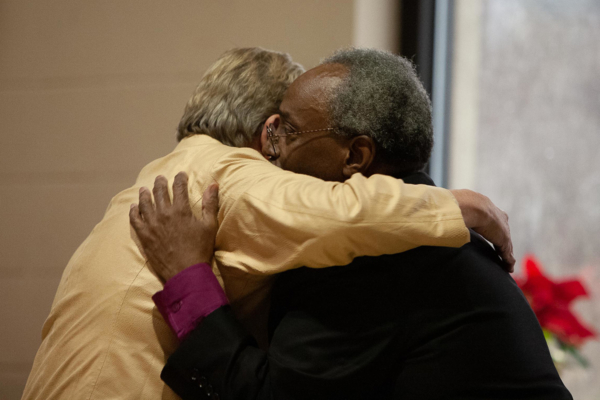 Presiding Bishop Michael Curry shares a hug during his pastoral visit to the Diocese of East Carolina on Dec. 8 and 9. Photo: John Bauerlein

[Episcopal News Service – Wilmington, North Carolina] Three months after Hurricane Florence made landfall along the coast of North Carolina, many there are living in what feels like a liminal space. The initial chaos of the storm has passed, but the state of disorientation and uprootedness has become the “new normal.”

During his pastoral visit last weekend in the Diocese of East Carolina, Presiding Bishop Michael Curry emphasized that he had come primarily to listen to the stories of those who had been impacted, to bear witness to the recovery work being done, and to call members of the wider Episcopal Church to remember that their siblings in East Carolina are still in need.

The diocese encompasses the coastal third of North Carolina. Over the course of his two-day visit, Curry preached at a Sunday Eucharist and attended two additional gatherings that provided opportunities for community members to share their stories and time for Curry to respond pastorally.

The first gathering was held at St. Anne’s Episcopal Church in Jacksonville, North Carolina, on the evening of Dec. 8.

At this gathering, three individuals from around the diocese shared their experiences prior to, during and in the aftermath of Florence. The thread that was woven through each of these stories was the importance of connection and caring for one another.

The Rev. Cortney Dale from Christ Episcopal Church in New Bern spoke about how her partners in ministry were invaluable during this time and allowed her to supply the essential needs of those in her community. Shirley Guion of St. Cyprian’s Episcopal Church in New Bern shared the history of her parish, highlighting what a rock it had been for so many people, and how heartbreaking it had been to evacuate and return to major damages in the church.

Pam Banta, director of St. Anne’s Parish Day School in Jacksonville, explained how she had been unable to evacuate but was grateful to have been there amid the storm because it allowed her to begin the process of providing temporary fixes for leaks in the school before others were able to return.

Hurricane Florence made landfall near Wilmington on Sept. 14 with 90 mph winds, part of a particularly active hurricane season that left a path of destruction from the Gulf Coast to coastal Virginia. Florence was blamed for the deaths of 50 people.

Hurricane Michael made landfall a month later in the Florida Panhandle as an even more powerful storm with 155 mph winds, killing at least 40 people. Curry has scheduled a pastoral visit in the Diocese of the Central Gulf Coast in January.

Though being away from one’s church building provides a whole slew of headaches and complications, there seemed to be a lot of joy during the congregation’s Eucharist with Curry.

In his sermon, the presiding bishop emphasized the importance of remaining hopeful and continuing to dream, even if those dreams feel out of reach during times when everything around us is in disrepair.

A packed house at St. Philip's, Southport this morning, as @Pb_curry proclaimed a message of hope from Isaiah 40: “Every valley shall be exalted, and every mountain and hill shall be made low: and the crooked shall be made straight, and the rough places smooth.” #episcopal #ecdio pic.twitter.com/SQdv4TrcWS

The final gathering was another storytelling session, held in the afternoon Dec. 9 at St. James Parish, the oldest church in Wilmington.

The Rev. Jody Greenwood of Church of the Servant Episcopal Church, Wilmington, shared her experience of organizing relief and recovery work in the Lower Cape Fear Deanery. Like Dale in New Bern, Greenwood said the relationships she has built with ministries and relief organizations have helped her connect those with time and resources to those who have needs.

Lisa Richey, dean of the Lower Cape Fear Deanery, shared some of her personal story and emphasized that there are many people in the deanery who have not yet recovered from Hurricane Matthew in 2016. Just two short years later, they faced destruction once again during Florence.