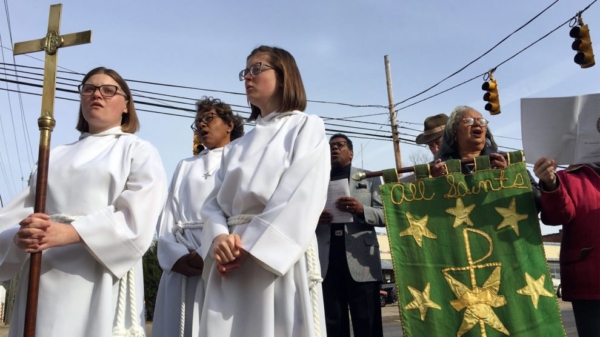 Acolytes and a crucifer from St. Ambrose Episcopal Church stand outside All Saints’ Episcopal Church in Warrenton, N.C., during a closing service on Dec. 8, 2018. Photo: Yonat Shimron/Religion News Service

[Religion News Service] On a chilly December morning, 100 years and one week after its sanctuary opened, All Saints’ Episcopal Church, an African-American congregation with a proud history, was formally closed.

Bishop Samuel Rodman presided over the Eucharistic service in an elementary school a block away from the church, where weekly services ended more than three years ago. Several longtime members returned to read Scriptures and sing hymns. Afterward, the group of 100, including history buffs and well-wishers from North Carolina and Virginia, shared a meal of fried chicken and baked beans.

All Saints is hardly alone among mainline Protestant and Catholic congregations. Faced with dwindling members, crumbling infrastructure and costly maintenance, some 6,000 to 10,000 churches shutter each year, according to one estimate. More closures may be in the offing as surveys point to a decline in church attendance across the country.

But All Saints is an example of an even sharper decline.

Historically African-American churches across the South are fast disappearing. Some were created after the Civil War when slavery was abolished; others in the crucible of Jim Crow, when whites who had long relegated blacks to the church balcony no longer tolerated them at all.

The Episcopal Diocese of North Carolina once boasted 60 such churches. Today, a mere dozen are left and, of those, only three have full-time clergy. Epiphany Episcopal Church in Rocky Mount, N.C., closed two years ago; at least one other is in danger of shuttering next year.

Of course, African-Americans have been welcome in all Episcopal churches for years — and the presiding bishop of the Episcopal Church, Michael Curry, who served as bishop of the North Carolina diocese before leading the 1.7 million-member denomination, is black.

At Saturday’s (Dec. 8) closing service, there was a recognition that it was in part progress in race relations that has doomed African-American congregations. But there was as much tribute paid to the sacrificial work of so many pioneering black Episcopalians.

“Jesus provided those saints with the fortitude … to say, ‘We belong to the house of God,’” said the Rev. Nita Byrd, chaplain at St. Augustine’s University in Raleigh, who delivered the closing service sermon. “We are not aliens in the Christian family. We are not second-class citizens in the Episcopal Church.”

As North Carolina wrestles with the aftermath of Jim Crow — the University of North Carolina’s trustees have recommended that a racially motivated Confederate statue torn down by protesters in August be housed in a $5.3 million museum to be built on campus — there is a sense that these churches slowly fading from view also have a story to tell about the racial history of the region.

Members of All Saints hope that story is preserved.

“Not only was All Saints important to us, but to the community and the nation,” said Wilhelmina Ratliff, a middle school teacher who is one of the last six remaining members.

The church was formed in 1892 — about five years before Jim Crow made it nearly impossible for blacks to remain in white churches. It was not the first black Episcopal church in North Carolina. That honor belongs to St. Cyprian’s in New Bern, which got its start in 1866 and remains open.

But All Saints in particular benefited from, and nourished, a succession of notable black priests. Among them was Henry Beard Delany, who would become one of the first two black bishops consecrated in the Episcopal Church, in 1918. (His daughters, Sarah and A. Elizabeth Delany, told about their civil rights struggles in their 1993 best-selling book, “Having Our Say.”)

Henry Delany, who was born into slavery in Georgia, preached at All Saints for more than two decades, traveling an hour by train from Raleigh one Sunday a month.

His daughter Sarah recalled: “When Papa became a bishop, he occasionally was encouraged by a friendly conductor to take the Pullman instead of the Jim Crow car. But Papa would say no. He would be amiable about it, though. He would say to the conductor, ‘That’s OK. I want to ride with my people, see how they’re doing.’ And he’d go sit in the Jim Crow car.”

Delany helped establish a parochial school at All Saints where young African-Americans were educated. Later he worked to raise money for a new church building. Delany wanted the new building, which eventually rose on the corner of West Franklin and Front streets, to honor a late black Episcopal priest with roots in Warren County.

That priest, Thomas White Cain, was the first black Episcopalian to serve alongside white priests with equal voice and vote in the national legislative body of the Episcopal Church, the General Conference. (He died when he was swept away by a 1900 hurricane that destroyed Galveston Island, Texas.)

Delany was able to raise $1,500 for the All Saints building, which would also be known as the Thomas White Cain Memorial. Of that, $500 was pledged from among black Episcopalians across the country.

Delany and Cain are only two of a dozen trailblazing black Episcopal priests who came through All Saints or the larger Warren County, whose population to this day is estimated to be 51 percent African-American.

Though never large, the congregation was a vital part of the community. In later years, it operated a center for special-needs children in its basement. Scholarships from the church sent local students to college. The rectory next door was used as a shelter for victims of domestic violence.

“It was a vibrant place, full of energy and enthusiasm,” said Robin Williams, a retired juvenile court counselor who attended the church for 25 years.

The Rev. Jemonde Taylor, rector of St. Ambrose Episcopal Church in Raleigh, another historically black church, worries about what the decline of churches like All Saints might mean for recruiting black clergy.

The remaining members of All Saints now attend other Episcopal churches nearby. But they are not quite ready to abandon their old home. A group is exploring the possibility of reopening the closed structure to house some kind of ministry for the community, perhaps in partnership with another group. First, it needs some repairs, which is why the closing service was held at the elementary school.

“We have hope,” said Ratliff. “We know this is not it. Everybody’s coming together on the same page. What will the rest of the story be? We don’t know yet.”