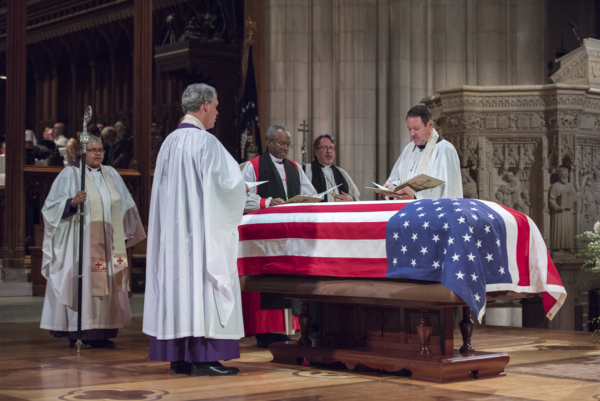 “When death comes, as it does to us all, life is changed, not ended,” the Rev. Russell Levenson Jr., rector of Bush’s Houston congregation, said during his state funeral sermon. “The way we live our lives, the decisions we make, the service we render matter. They matter to our fellow human beings, to this world that God has given us, and they matter to God. Few people had understood this as well or lived their lives as accordingly as President George Herbert Walker Bush.

“Now hear what I said: lived it. Not earned it or strived to achieve it. It was as natural to him as breathing is to each of us.”

Recalling Barbara Bush’s frequent comment to him of “good sermon, too long,” Levenson preached for just more than 12 minutes during the service at Washington National Cathedral, which ran nearly two and a half hours. 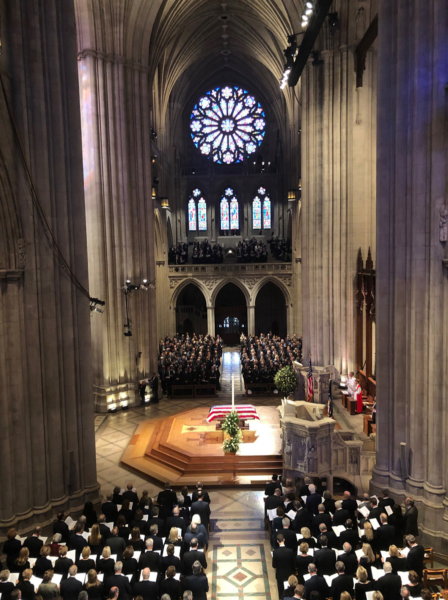 The last funeral at Washington National Cathedral to approach such significance was the service for U.S. Sen. John McCain on Sept. 1. But a state funeral is an honor reserved for presidents, part of the series of tributes coordinated by the U.S. Army Military District of Washington.

The military pallbearers slowly and precisely carried the casket up the steps to where Curry and Budde recited the traditional “reception of the body” prayers. “With faith in Jesus Christ, we receive the body of our brother George for burial,” Curry said at the door.

A sweet moment on a sad day. 🖤 George W. Bush slipped Michelle Obama a piece of candy during #GeorgeHWBushFuneral, and the Obamas’ reactions were everything. pic.twitter.com/rpCj3A3si1

Then, the cathedral’s bells began to toll 41 times to mark the elder Bush’s rank among U.S. presidents, as acolytes and clergy, including those from other faiths, slowly led the pallbearers carrying the casket up the cathedral’s long aisle. Hollerith and Levenson recited the anthems from the Book of Common Prayer’s Burial Office. The order of the service is here. 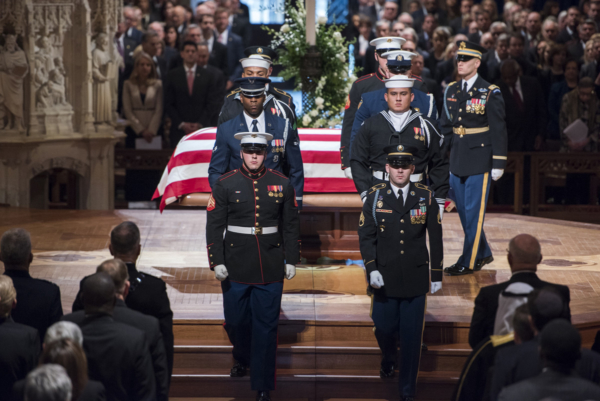 Meacham began the tributes, telling the congregation that Bush was “an imperfect man” who “left us a more perfect union.” Bush, Meacham said, knew that politics could not be completely pure if you wanted to win, and you had to win if you wanted to lead.

Meacham said Bush believed there was a reason he had been spared death during a World War II bombing raid in the Pacific, during which his crewmates died, and he spent the next 74 years of his life in service to that belief.

“His heart was steadfast. His life code, as he said, was, ‘Tell the truth. Don’t blame people. Be strong. Do your best. Try hard. Forgive. Stay the course,’” Meacham recalled. “That was and is the most American of creeds.”

Meacham said Bush’s sometimes-mocked “Thousand Points of Light” and Abraham Lincoln’s appeal to the “better angels of our nature” are “companion verses in America’s national hymn.”

Both presidents, Meacham said, called on Americans to “choose the right over the convenient, to hope rather than to fear and to heed not our worst impulses but our best instincts.”

Historian Jon Meacham: George H.W. Bush's life code was "tell the truth. Don't blame people. Be strong. Do your best. Try hard. Forgive. Stay the course…That was, and is, the most American of creeds." https://t.co/B3hZufXKHW #Remembering41 pic.twitter.com/pFcP2PNnUB

Mulroney, standing at a podium very near Trump, praised Bush’s efforts to preserve and strengthen the North Atlantic Treaty Organization after the disintegration of the Soviet Union and the Iron Curtain. He also praised Bush’s work to achieve the original NAFTA agreement, which he said had been “modernized and improved by recent administrations.” Trump has been critical of both NATO and NAFTA and recently announced he would withdraw from the latter, apparently in an effort to force Congress to approve a new version of the trade pact with Canada and Mexico.

“Fifty or 100 years from now, as historians review the accomplishments and the context of all who have served as president, I believe it will be said that in the life of this country, the United States — which is, in my judgment, the greatest democratic republic that God has ever placed on the face of this earth — I believe it will be said that no occupant of the Oval Office was more courageous, more principled and more honorable than George Herbert Walker Bush,” Mulroney said.

During Simpson’s folksy and humorous eulogy, he recalled a time when he said he had fallen from Washington’s A list to what he called the Z list because of his political choices. Bush invited him and his wife to join the Bushes for a weekend. The four had a highly visible departure from the White House. Simpson remembered Bush saying his staff told him not to issue the invitation, but he overruled them, citing friendship over politics.

Bush never hated anyone, Simpson said, recalling that both men had strong mothers who taught them that “hatred corrodes the container it is carried in.”

Bush understood the choices that leaders had to make, the former senator said. Bush was once presented with a bipartisan bill on the budget process, health care, Social Security solvency and other policy issues. To fund the bill, taxes would have to be increased and that would require the president to go against his well-known promise of “Read my lips: No new taxes.” The bill passed in the Senate, but Bush’s fellow Republicans in the House defeated it and, Simpson suggested, Bush’s willingness to break his no-taxes vow for the sake of the bill led to his failure to be elected to a second term.

Simpson said Bush told him that when faced with tough choices, he chose “the country that I fought for,” rather than his party or his legacy.

“Those who travel the high road of humility in Washington, D.C., are not bothered by heavy traffic,” Simpson said.

Briefed in 2011 about his funeral and lying in state, the 41st President asked with typical humility, "Do you think anyone will come?" Tonight, people are waiting hours to pay their respects. This photo, taken Monday, is courtesy the Senate Press Photographers’ Gallery pool. pic.twitter.com/jveNxNlUYV

During his eulogy, George W. Bush said his father almost died of a staph infection during his teenage years. That and his World War II experience “made him cherish the gift of life, and he vowed to live every day to the fullest,” the 43rd president said of his father, the 41st.

“To his very last days, dad’s life was instructive,” Bush said. “As he aged, he taught us how to grow with dignity, humor and kindness, and when the good Lord finally called, how to meet him with courage and with the joy of the promise of what lies ahead.”

Bush said his father “taught us that public service is noble and necessary, that one can serve with integrity and hold true to the important values, like faith and family.

“He strongly believed that it was important to give back to the community and country in which one lived. He recognized that serving others enriched the giver’s soul.”

Bush said he learned years later about how his parents’ faith sustained them when his sister, Robin, was dying of leukemia at age 3. “Dad always believed that one day he would hug his precious Robin again,” he said.

Bush began to cry as he ended his reflection, saying, “And in our grief, let us smile, knowing that dad is hugging Robin and holding mom’s hand again.”

During his sermon, Levenson said Bush’s life showed that “faith means more than words,” adding that Bush’s faith was “a deep faith, a generous faith, a simple faith in the best sense of the word.

“He knew and lived Jesus’ two greatest commandments, to love God and to love your neighbor,” Levenson said. “The president served not just some, but all that God sent his way.”

On the day Bush died at age 94, Levenson said the president’s friend James Baker stood at the foot of Bush’s bed, rubbing his feet for about 30 minutes, causing Bush to smile. Levenson said he had the sense of Jesus’ service on Maundy Thursday, washing his friends’ feet.

Later, all those who were with Bush knelt and placed their hands on the president and prayed “and then we were silent for a full long measure as this man who changed all of our lives, who changed our nation, who changed our world, left this life for the next,” he said.

The Rev. Dr. Russell Levenson Jr. recalls the words of President George H. W. Bush as the last stone was placed on this Cathedral. "Without faith, we are stained glass windows in the dark." #GeorgeHWBushFuneral

The funeral then continued in the traditional structure of the Burial Office, and after Curry, Budde, Hollerith and Levenson performed the commendation, the military pomp began once again. The pallbearers moved into place and lifted Bush’s casket as the organ began to play the hymn “For all the saints.” The sharp sounds of military commands could be heard over the music as the clergy led the casket from the church. 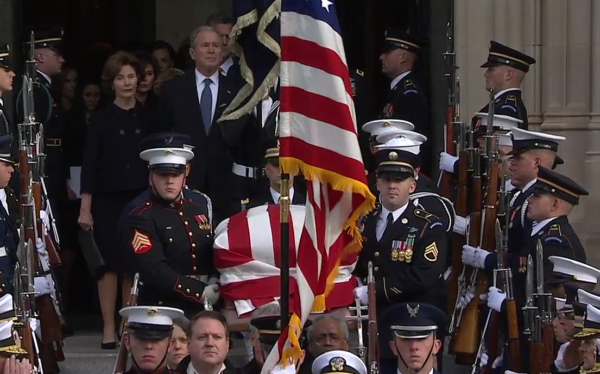 They waited alongside the hearse parked in front of the cathedral as the casket was loaded for the trip to Joint Base Andrews where Air Force One would take the Bush family home to Houston. The former president will lie in repose at St. Martin’s Episcopal Church until 6 a.m. Dec. 6. Another memorial service will be held at the church later that morning.

Bush will then travel by train and then by motorcade to the George H.W. Bush Presidential Library in College Station, Texas, where he will be buried next to his wife, who died in April, and their daughter Robin.

Episcopal News Service coverage of the funeral planning and Bush’s relationship with the Episcopal Church is here.