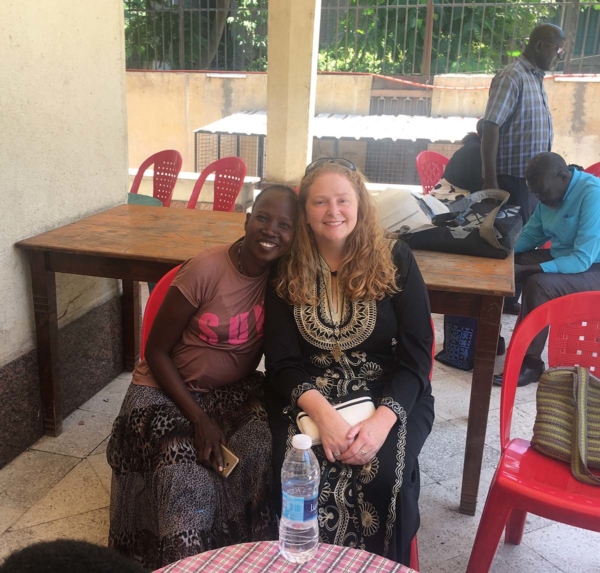 [Episcopal News Service] When her kindergarten teacher issued the classic assignment, “What do you want to be when you grow up?” Caroline Carson, 47, didn’t have a single answer. Instead, she had about 25 options – including becoming a horse and an interest in space travel.

Remarkable curiosity and uncommon exuberance have been a divining rod of sorts for Carson, helping her seek out spiritual nourishment by building relationships with people around the world.

Carson, a third-year seminarian at the School of Theology at The University of the South in Sewanee, Tennessee, has visited 40 countries, most in a quest to see and experience firsthand the movement of the Holy Spirit. Her latest endeavor has been teaching and learning about pastoral care for refugees in Egypt, North Africa and the Horn of Africa.

Funded by a United Thank Offering grant, the project included a trip this spring to Cairo to serve as a volunteer for Refuge Egypt. Pastoral care – especially interreligious care – is often an unfamiliar concept in the Arab community, Carson said. During her visit, she led a training about pastoral care, showing the variety of ways that care can be expressed, including through art and music, and she spoke about the Anglican Communion’s commitment to peace and reconciliation. But most of her time was spent listening, learning about the needs of the community and talking with asylum-seekers and refugees.

“When you look in the eyes of so many of these asylum-seekers, you see that they’re lost,” said Carson. “They’re in shock. Sometimes they just need someone to listen to them, to be with them. There’s a story behind every person.”

The United Thank Offering, a ministry of the Episcopal Church, receives the offerings from individuals and congregations and distributes 100 percent of the collections to innovative mission and ministry.

“Goodness can foster goodness,” Carson wrote in her application for the grant. She recalled the directive from Leviticus 19:34: “The alien who resides with you shall be to you as the citizen among you; you shall love the alien as yourself, for you were aliens in the land of Egypt: I am the Lord your God.”

“The care of soul is of vital importance. Addressing injustice can spur the actions of justice. The displaced deserve a change to be shown godly love whether by sharing silence and presence, a story, a meal or being allowed to grieve,” Carson said.

Though fascinated by ancient history, Carson’s connection to Egypt began with a postmodern twist: a priest in Egypt retweeted a photo that she had posted in her role as a volunteer in NASA’s Solar System Ambassadors Program.

“I thought, ‘I wonder who retweeted that picture?’ So I followed up,” said Carson. Her curious nature found a friend in the Rev. Kerry Buttram, a priest at All Saints Cathedral in Cairo. “I told him that I was going on a choir tour to Jerusalem and since that’s pretty close, what would it be like to come by the cathedral and shake his hand.”

So she did. And a few years later, Carson reached out again, asking, “What would it be like to offer some teaching on pastoral care?” So she did.

What might seem bold to some is part of Carson’s approach to a faithful life, one that takes joyful risks in seeking and building relationships with people around the world. This commitment to community is evident in another passion: music. Although she considered becoming a nun in high school, Carson couldn’t resist the sound of music; she eventually earned a doctorate degree from the University of South Carolina with a major in conducting.

“I love working with students, of being a part of making something collaborative happen,” Carson said. “Choral music is about communication, not just with your audience but with the text … that’s the nature of an ensemble. You might have that one flute line or an alto part, but you’re still part of the whole, part of a community.”

Her work as a conductor and teacher took her around the world. She began adding time on either end of her music trips to volunteer for mission work. Soon, she felt God beckoning her to a different vocation, and within the community of the Diocese of Louisiana, Carson discerned a call to the priesthood.

Scheduled to graduate from seminary in the spring of 2019 – and, God willing, ordained as a transitional deacon on Dec. 15, Carson has sought numerous opportunities to develop relationships. She traveled to the Philippines where she taught a liturgy and music course at Saint Andrew’s Theological Seminary, and she volunteered at the Joel Nafuma Refugee Center in Rome, Italy, before making her way to Egypt.

While Carson plans to work in parish ministry after graduation and ordination to the priesthood, she hasn’t lost her youthful enthusiasm. She still has a full list of things she wants to do. Returning to Egypt to continue listening to the needs and stories of refugees is a top priority. She has plenty of other plans too, all focused on peace building – in churches, in communities and in the world.

“Peace building is the future of our church,” said Carson. “We are all called to be missionaries.”

– Richelle Thompson is deputy director and managing editor of Forward Movement, a ministry of the Episcopal Church committed to inspiring disciples and empowering evangelists.