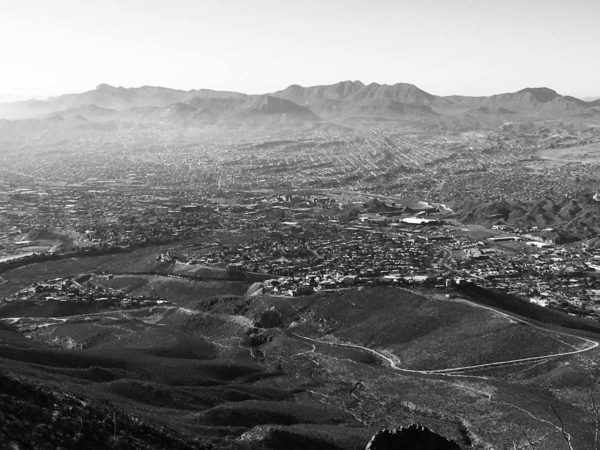 The border between El Paso, Texas, and Ciudad Juárez, Mexico, is the second busiest U.S.-Mexico crossing. A narrow strip of the Rio Grande separates the two cities, whose combined population is more than 2 million people. From the Franklin Mountains in El Paso, the border is invisible. Photo: Lynette Wilson/Episcopal News Service

[Episcopal News Service – El Paso, Texas] While driving along Interstate 25 from Albuquerque on his way to Las Cruces, New Mexico, Rio Grande Bishop Michael Hunn spotted a billboard on the left-hand side of the road just south of Belen that almost made him crash his pickup truck.

“I was so confused by the billboard. It said in broad letters, two sentences … ‘Heaven has a wall and strict immigration policies. Hell has open borders,’” said Hunn, who was then bishop-elect. “I almost wrecked the truck. … I had to slow down. … Does it really say that? I was so confused, and I’m still confused.”

The billboard reminded Hunn, who before his election as bishop of the Diocese of the Rio Grande served as Presiding Bishop Michael Curry’s canon for ministry within the Episcopal Church, that “for those of us in the church, part of the work of engaging and following Jesus Christ is always theological. And we are living in a society and in a culture where there are Christian people who go to church regularly who are interpreting their faith in such a way that they can buy a billboard that can say, ‘Heaven has a wall and strict immigration policies. Hell has open borders.’

“If that sentiment is out there, if that theology is out there – and I think it’s real in all of our places – then it would make sense for us as Episcopalians, for us as Anglicans, to do some theological work,” said Hunn, on Nov. 18, in his sermon during the closing Eucharist of the first-ever Border Ministries Summit here in El Paso.

About 60 people attended summit held Nov. 16-18 at the El Paso Marriott. Although the summit focused on border ministries carried out by dioceses that share a border with Mexico, attendees came from as far as Massachusetts. Once migrants or asylum-seekers cross the U.S. border, they often travel to other states to look for work or to reunite with family. The Diocese of the Rio Grande, which covers 40 percent of the U.S.-Mexico border, hosted the summit to bring together people engaged in borderland ministry to share experiences and to network.

“About a year ago, I began to look at borderland ministries and asked what was going on in other dioceses,” said the Rev. Paul Moore, who chairs the Rio Grande Diocese’s Borderland Ministries and who organized the summit. The next summit will take place Nov. 14-16, 2019, in Tucson, Arizona.

The summit coincided with migrant caravans’ continued arrival at the U.S.-Mexico border. Hundreds of Central American migrants began arriving Nov. 14 in Tijuana, Mexico, and other ports of entry. The caravans have been politicized in United States and in their Central American countries of origin, Guatemala, El Salvador and Honduras, where one of the main drivers of migration – forced displacement by violence – is often denied. Here in the United States, President Donald Trump has called economic migrants and asylum-seekers an “assault on our country,” and his administration has deployed 8,000 troops to the border. The president has vowed to deny asylum claims of migrants who attempt to enter the United States illegally, meaning not through a designated point-of-entry.

When living along the border, as people like Moore who has lived there for some 25 years know, it can feel like straddling two cultures, and border crossings, whether to shop or go to school, seek medical attention, look for work or reunite with family, occur every day. In fact, prior to 1996, people would cross the border easily to work and return home to their families. But when then-President Bill Clinton signed the Illegal Immigration Reform and Immigrant Responsibility Act, crossing became too dangerous and people began staying in the United States.

The law, said Moore, “created a permanent population,” in some cases, separating families as people stayed in the United States to work and send money home to support them.

For the past two years, Moore, who also serves as rector of Church of the Good Shepherd in Silver City, New Mexico, has celebrated the Eucharist on the Sunday closest to Mexico’s Mother’s Day, May 10, in the middle of the Rio Grande, straddling the U.S. and Mexico, near Lajitas, Texas. The Eucharist is part of an annual event that brings together people and briefly re-unites families on both sides of the border.

The Eucharist is one of the many Episcopal-Anglican ministries happening along the border.

On Nov. 17, representatives from the dioceses of Northern Mexico, West Texas, Arizona, San Diego, Western Mexico and the Rio Grande gave presentations. In McAllen, Texas, the Rev. Rod Clark, vicar of St. Peter & St. Paul in nearby Mission, hosts Taco Tuesdays, feeding hungry people. He also organizes immersions for people interested in learning about living on the border, and he provides outreach to border patrol agents, who often have a difficult, thankless job that can, at times, be misunderstood.

The Diocese of West Texas has for a decade operated Fronteras Unidas, or “united borders,” providing continuing education to clergy on both sides of the border and providing microenterprise loans to women in southern Mexico.

In Nogales, Mexico, the Rev. Rodger Babnew Jr., a deacon serving St. Andrew’s Episcopal Church in the Diocese of Arizona, along with a counterpart from the Evangelical Lutheran Church in America’s Grand Canyon Synod, operates a five-facility, 780-person capacity shelter system. Since the caravans began arriving, 18 to 22 families have been leaving the shelter to request asylum at the border every day, whereas a two weeks ago, they would see three to five families leave the shelter per week.

In San Diego, which borders Tijuana, Mexico, the busiest port of entry, where Immigration and Customs Enforcement has been releasing 75-100 asylum-seekers from detention daily at the bus station without assistance, Episcopalians have been supplying care packages with toiletries and other essentials, and they have brought in a mobile shower station.

In Tucson, Episcopalians have been volunteering at Casa Alitas, a short-term shelter that offers migrants and asylum-seekers a place to stay before they board buses and planes to reunite with family in other parts of the country while awaiting their immigration hearing.

These are just a sampling of the ongoing ministries Episcopalians for years have been engaging in along the border. Given the media coverage devoted to the caravan, it can be easy to forget that some thousands of people arrive at the U.S. border every day. In 2017, an average 850 people were apprehended trying to cross the border illegally; however, that number is down from an average 1,983 in 2007, according to U.S. Customs and Border Protection.

For example, hundreds of people left El Salvador on Oct. 31 in three separate caravans, but as El Salvador Bishop David Alvarado said during a Nov. 18 presentation about root causes of migration, between 200 and 300 people depart daily from El Salvador, one of the most violent countries in the world.

Across Central America’s Northern Triangle, a region that includes El Salvador, Guatemala and Honduras, more than 700,000 people have been forcibly displaced by violence. And it’s a global phenomenon affecting a record 68.5 million people worldwide.

The Episcopal Church’s Washington, D.C.-based Office of Government Relations compiled “A Faithful Response to the Caravan: Five Things to Know.”

Between presentations by dioceses, the summit’s workshops focused on social work, immigration law, combatting racism, and the Episcopal Church’s immigration, migration and refugee advocacy and engagement at the federal level.

“The church’s official policy positions on immigration date as far back to resolutions in the 1930s calling for the loosening of restrictive and racially discriminatory immigration policies, and then throughout the 20th century urging parishes to participate actively in sponsoring refugees for resettlement and civil rights protections for undocumented immigrants,” explained Lacy Broemel, the Episcopal Church’s refugee and immigration policy analyst.

Broemel works out of the Episcopal Church’s Washington, D.C.-based Office of Government Relations, which represents the church’s policy priorities, as determined mainly by General Convention and Executive Council resolutions, to the U.S. government. Resolutions, she said, focus on several themes, including family unity; challenging discrimination and racism inherent in many restrictive immigration policies; offering long-term and stable policy solutions for immigrants through a pathway to citizenship; protecting human rights and due process; offering protections for refugees; uplifting LGBTQ refugees and immigrants; and addressing root causes of migration by promoting peace and development.

During his sermon at the close of the summit, Hunn pointed out that, beginning with Adam and Eve, “pretty much the first thing that happens to humanity is that we’re displaced.” He then pointed to the examples of Cain and Abel, Abraham and Sarah, Moses, Mary, Joseph and Jesus, all of whom were forced to flee, exiled or made refugees. Hunn’s words echoed those of former Presiding Bishop Katharine Jefferts Schori, who now serves as assisting bishop in the Diocese of San Diego and gave the summit’s keynote address on Nov. 16.

“The biblical narrative takes us from cosmic creation, including humanity, to earthlings planted in a garden for a season,” said Jefferts Schori. “Their yearning for knowledge sets them on an ages-long search for home; we, their heirs, are still looking. God sends Abram and Sarai out of Haran in search of a new home. They get to Canaan and keep moving, to Egypt, and then back again. Always there are struggles over who owns what and which terrain belongs to whom.

“Yet eventually our ancestors began to tell our story as a search for home in God, along the straight road through the wilderness, a way of justice and peace. This is about more than a plot of land; it’s about opening your hand to neighbors, whether you love, tolerate or fear them. The prophets began to challenge us about neighbors everywhere, not just our tribal kin. We learned that we’re meant to love the strangers, widows and orphans and homeless, and the difficult ones. We began to dream of God’s Reign, and government that brings justice and peace everywhere, and a home where all can rejoice, give thanks and live in harmony and abundance.”