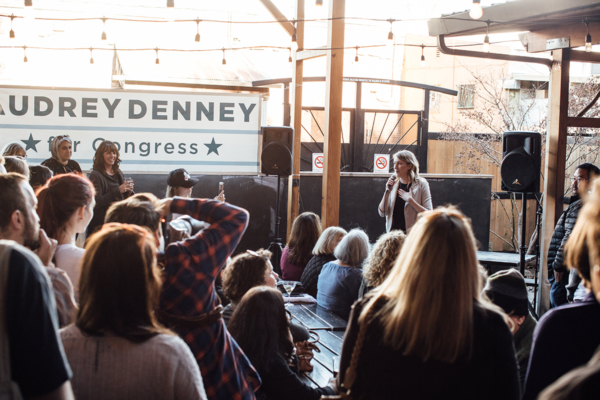 Audrey Denney speaks at a campaign event. She was raised Episcopalian and is currently running for Congress in California’s 1st District. Photo: Worldlove Photo and Video

[Episcopal News Service] When Audrey Denney decided to run for Congress in California’s 1st District, she had the support of some rather important Episcopal priests: her family members. All of them.

Venturing into politics made Denney something of a family exception after her mother, stepfather and two older sisters all chose to enter ordained ministry, but their faith example and Denney’s own Episcopal upbringing have influenced how she approaches the campaign trail.

“They’ve been an incredibly supportive family and presence in my life and inspired me to see what I’m doing now as living out our call to be God’s hands and feet in the world,” said Denney, a 34-year-old Chico resident who is running as a Democrat.

In Alabama’s 4th District, voters are getting to know Lee Auman, 25, a Democrat who served as an Episcopal youth minister while attending Auburn University and later worked for two years as director of the conference center at the Diocese of Alabama’s Camp McDowell in Nauvoo. 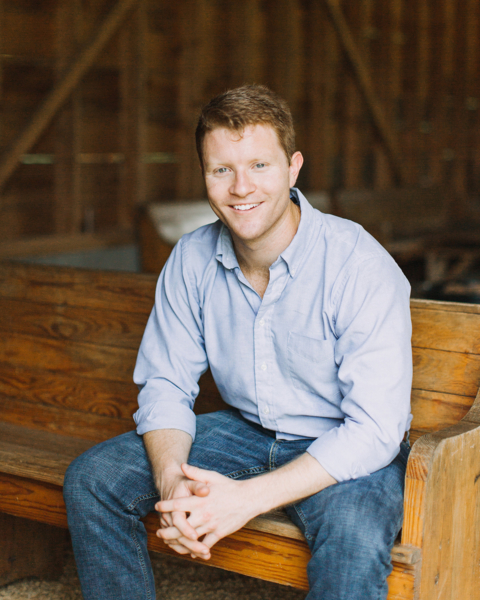 Lee Auman is an Episcopalian running for Congress as a Democrat in Alabama’s 4th District. Photo: Lee Auman for Congress

Faith “informs my life,” Auman told Episcopal News Service. “It is an undercurrent that is always inspiring me and moving me and reorienting me as a person, and I want to take that into office with me.”

Candidates wishing to bring their Episcopal roots to Washington, D.C., would find plenty of company in the past and present. The United States has a long history of political leaders from the Anglican tradition, and although the Episcopal Church’s representation in Congress has been eclipsed by other Christian denominations over the years, dozens of today’s senators and representatives still identify as Episcopalians or Anglicans.

Episcopalians’ desire to serve their country, states and districts transcends party lines and regional differences. Rep. Suzan DelBene is a Democrat from Washington. Sen. Angus King is an independent from Maine. Rep. Andy Barr is a Republican from Kentucky. All credit their Episcopal faith with shaping their political work.

“Being raised in the Episcopal Church, which is such an outwardly looking, active-faith community … we tend to be called to try and make a difference,” Barr told ENS in 2017 for a story about how faith inspires congressional Episcopalians’ public service.

Denney’s desire to make a difference was forged at an early age, from her years attending St. Paul’s School in Visalia, California, to her confirmation at St. James Episcopal Church in Paso Robles.

Denney also spent a year after college in El Salvador working with Cristosal, a human rights organization with roots in the Episcopal and Anglican churches. She later joined Cristosal’s board and served as president, and she continues to volunteer.

Although Denney still occasionally attends Episcopal worship services, she developed a connection with Bidwell Presbyterian Church in Chico while at college and now serves on Bidwell’s mission committee.

Denney, in a phone interview with ENS, described the moment a year ago when she began thinking of running for Congress. In her early 30s, she had reached a comfortable point in her life – “I was in this really kind of happy zone” – but soon felt called to something more.

She was in the car talking with her sister, the Rev. Robin Denney, who mentioned being inspired by a recent news story profiling women in their 30s who had launched campaigns for House seats.

Her sister was visibly moved by the question, and both became quiet and pensive.

“My stomach dropped in my belly and all of the hair stood up on my arms and I felt like the air was thicker in the car,” Audrey Denney said. 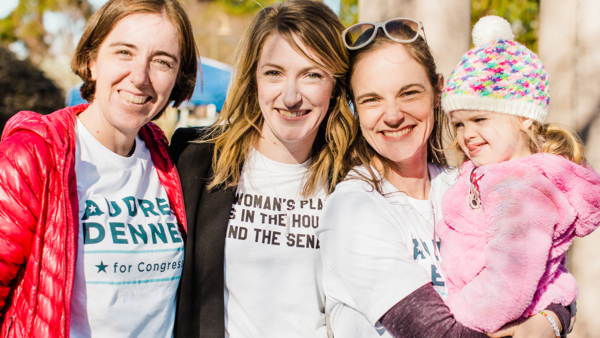 Audrey Denney poses for a photo between her sisters, the Rev. Robin Denney, left, and the Rev. Amy Denney Zuniga, who is holding her daughter. Photo: Worldlove Photo and Video

Audrey Denney is taking a different path but still has “a passion to see her faith lived out in the world,” Robin Denney said.

“I think all people are called to serve God in whatever capacity that we have vocationally. Sometimes that’s taking care of a family at home,” she said. For the Denneys, that calling often has meant the priesthood. “And sometimes that’s running for office.”

But candidate Denney doesn’t just have the backing of the clergy in her family. The Rev. Brian Solecki left his job as a minister at Bidwell Presbyterian Church to become her campaign manager. Early in the campaign, Solecki and Robin Denney joined Audrey Denney on a kickoff call with a consultant from the House Democrats’ campaign committee.

“This is the highest ecclesiastical representation I’ve ever had on a kickoff call,” Audrey Denney recalls the consultant saying.

Congress to be reshaped by Nov. 6 midterm elections

The stakes are high in races like this across the country. Republicans hold a 23-seat majority in the House. Democrats hope to regain control after the Nov. 6 midterm election, to serve as a check on President Donald Trump, whose approval rating of around 40 percent has remained historically low. Republicans’ slim majority in the Senate is less at risk in this election, though several key Senate races are surprisingly competitive.

The Episcopal Church does not get involved in partisan politics. It has a presence in Washington through its Office of Government Relations, which monitors legislation, coordinates with partner agencies and denominations, and develops relationships with lawmakers. The agency communicates frequently with the offices of an estimated 40 Episcopal members of Congress as of last year.

Several developments this year may diminish that number in the new Congress. Rep. Louise Slaughter, D-New York, died in March. Rep. Blake Farenthold, R-Texas, stepped down in April amid a sexual harassment scandal. Rep. Ileana Ros-Lehtinen, R-Florida, announced she is retiring after this term. Rep. Mark Sanford, R-South Carolina, lost his primary to a Trump-backed challenger.

California’s 1st Congressional District is geographically large, covering the northeast corner of the state. Chico and Redding are its two largest cities, and much of it includes rural and poor communities far removed from the state’s metro areas. It also has swung between the Democratic and Republican parties in recent decades, and in 2016 it voted solidly for Trump.

Denney is an underdog, according to projections on the FiveThirtyEight statistical analysis website, though she has an edge in fundraising over the three-term Republican incumbent, Rep. Doug LaMalfa. She also has touted her reliance almost solely on individual donations, rather than money from political action committees, or PACs.

“We’re giving the incumbent a run for his money. That’s for sure,” Denney said.

Auman is a long-shot candidate to unseat incumbent Rep. Robert Aderholt, a Republican who has represented Alabama’s 4th District since 1997. The district north of Birmingham spans the state, from Mississippi to Georgia, and is mostly rural. In 2016, it backed Trump by 80 percent, one of the president’s highest winning percentages in the country.

But Alabama, despite its solidly conservative reputation, surprised the country by electing a Democrat, Doug Jones, to the U.S. Senate in a December special election. Jones’ win gives Auman and other Alabama Democrats at least a shred of hope.

Auman said in a phone interview that he already was considering a run for Congress when Jones won, and the election of a fellow Alabama Democrat was further encouragement.

“Growing up as a liberal-leaning person in this state, I always heard Democrats might as well not vote,” Auman said. “Obviously, Sen. Jones’ election showed us that wasn’t true.”

Running for office, guided by faith

Auman’s family attended St. Stephen’s Episcopal Church in Huntsville, Alabama, when he was young and later joined Church of the Epiphany in Guntersville, which he still considers his home parish. He lives in Union Grove.

He also has a longtime connection with Camp McDowell, where he began attending summer camp as an “ankle biter.” During college, he worked in the summers as a camp counselor and eventually head counselor. 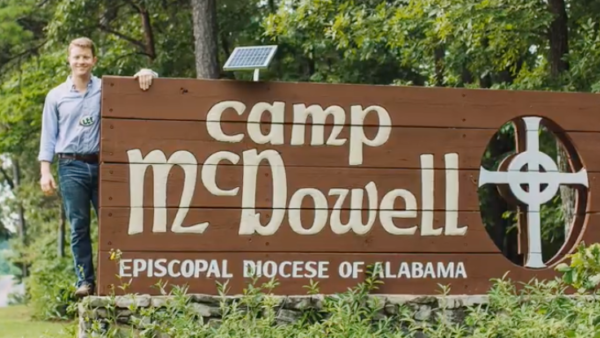 Lee Auman worked for two years as director of the conference center at the Diocese of Alabama’s Camp McDowell in Nauvoo before stepping down in March to run for Congress. Photo: Lee Auman for Congress, via Facebook

In Auburn, where he served as director of youth ministries at Holy Trinity Episcopal Church, Auman studied philosophy, partly because it seemed a logical step toward eventually attending seminary. Auman said he still is open to a future call to the priesthood, but his present call is toward public service in the political arena.

“Shortly after our president was elected, I realized I didn’t need to wait until I was older,” he said. “I just needed to toss my hat into the ring because I’m just convinced we can do better than we’re doing now.”

He sees Republicans campaigning on divisive issues and degrading the American political system, much like the money-changers whom Jesus cast out of the temple in the Gospels, Auman said.

“My Episcopal church growing up had people of all political backgrounds,” he said. Agreement on specific issues wasn’t as important as coming together and praying with each other as Christians with shared values. He hopes to bring that spirit to Washington.

Auman is one of at least two Episcopalians on Alabamans’ congressional ballots this year. The other, Rep. Bradley Byrne, is a Republican who has represented the 1st District since 2013.

Denney said her Christian faith is guiding how she campaigns, emphasizing integrity over political expediency. She also sees many opportunities to apply her faith to the issues facing residents in California’s 1st District.

“My entire lens on this campaign has been about justice,” Denney said – economic justice, racial justice, environmental justice, to name a few.

The district is mostly white but also has sizable Asian, American Indian and black populations, census figures show. More than 10 percent of families in the district live below the poverty level, and many in rural areas struggle from lack of access to health care. And Denney said her interest in environmental justice was heightened by the Carr wildfire that destroyed more than 1,000 homes in Redding over the summer.

When she talks to secular audiences on the campaign trail, the hope she describes for the future is a vision of seeking the kingdom of God, she said, even if she doesn’t use such terms with them.

“That’s what fighting for justice is,” Denney said. “So, my faith absolutely has compelled me to step out in this way.”