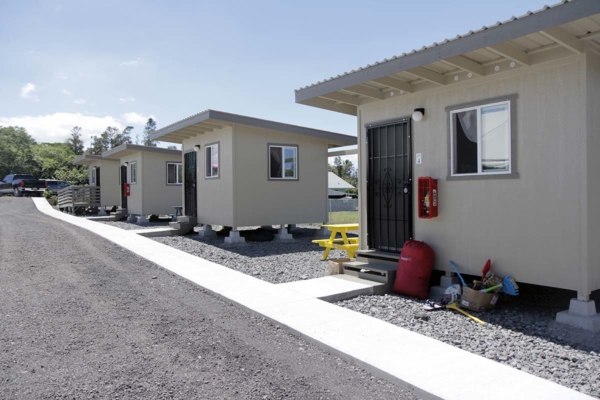 [Episcopal News Service – Hilo, Hawaii] In a disaster’s immediate aftermath, communities often receive an outpouring of support. It’s the long-term effects, though, that linger after the attention dissipates and the next disaster hits, that make community partnerships essential.

Hale Iki Village, on the island of Hawaii, is one such partnership – a 10-unit tiny-house development serving individuals and families still displaced by last May’s Kilauea volcano’s eruption. One such family is Lionel Furness, 60, and his 6-year-old son, Osha, who left their rental property after Furness lost his landscaping and office jobs in Pahoa and couldn’t make rent.

If not for Hale Iki Village, they’d likely be “camping out somewhere,” said Furness, as he walked toward his tiny house. It was clear, he added, that Pahoa – a municipality in the high-lava-risk Puna district – and its economy were devastated, and it was time to move on.

The Kilauea volcano’s weeklong eruption in early May and the monthlong lava flow that followed destroyed hundreds of homes and a biodiverse forest and filled in the beloved Kapoho tide pools. 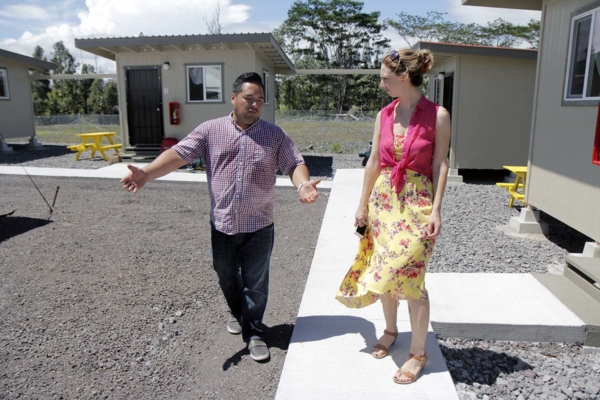 “We had multiple earthquakes and then there were fissures but no lava; at first there was one and then there were two, and it went all the way up to 16 or something. And, so for days on end these fissures, these huge giant cracks in the earth, just kept opening up and opening up … and at some point, lava started to flow,” said the Rev. Katlin McCallister, priest-in-charge of Holy Apostles Episcopal Church in Hilo.

The most destructive fissure “created a lava river and destroyed the entire area,” she said.

As the disaster unfolded, McCallister and her senior warden made calls to members in the at-risk area, offering pastoral care and support, she said. In one afternoon, volunteers with 10 pickup trucks moved a family out of a mandatory evacuation zone.

For months, church members cooked a Tuesday meal at one of the shelters; through an Episcopal Relief & Development grant, Holy Apostles provided air purifiers to schools and individuals sheltering in place to limit their exposure to sulfur dioxide and fine particles. Money went toward providing laundry services for shelter residents, and to individuals needing rental, utility and basic assistance. 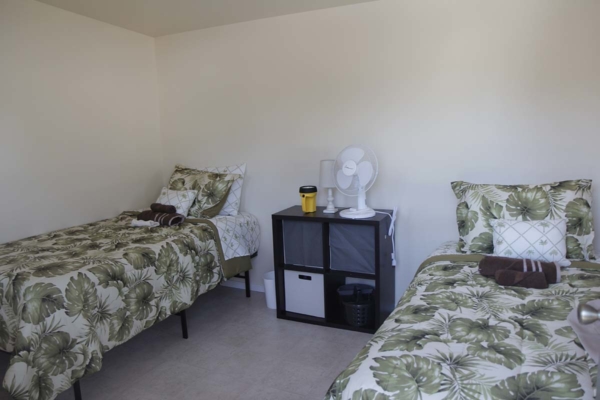 A local interfaith coalition had collaborated informally to address homelessness and other chronic issues, but after the eruption, the group began regular Monday meetings to talk about resources, immediate challenges and problem-solving without duplicating efforts. State and county officials, social service providers and Federal Emergency Management Agency representatives later joined the meetings when they realized the need to build community consensus.

But as FEMA left, as was always the plan, turning over the response to locals, the coalition’s attention turned to long-term recovery, and tiny houses emerged as a solution to people’s transitional housing needs. Emergency shelters served those displaced by lava and toxic gas, with the last of them closing on Sept. 17. Still, there are vulnerable people who cannot rely on others or who have exhausted family and social connections who still need a transitional place to live, explained McCallister.

Holy Apostles and other religious organizations, including Catholic Charities, partnered with Pastor Dion K. Maeda of Connect Point Church to build Hale Iki Village. Connect Point had the land but not the resources to build, said Maeda.

Each tiny house has two twin-size beds. Toilets and showers for males and females are a short walk away, near the shared kitchen and common area. The homes are arranged in a rectangle and connected by a concrete walkway. In late September, five families had moved in and others were scheduled to arrive.

“Holy Apostles has given $28K toward funding the transitional housing project, as well as support for a community garden, and countless other church groups and faith groups have given money to fund it,” she said. Local industries donated materials and “labor was donated by professional electricians and plumbers.” 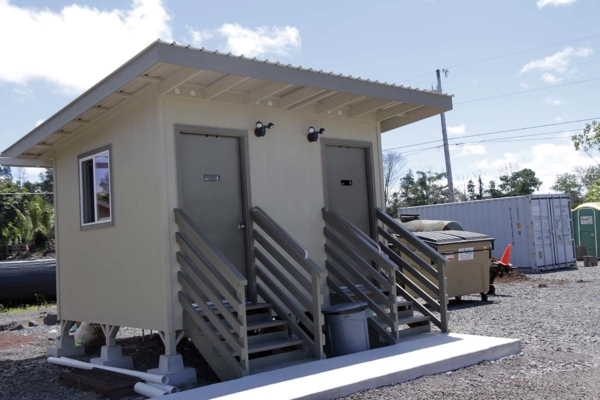 Families arrive through referrals from organizations like Hope Services, where A. J. Kubo, a housing navigator and Holy Apostles’ member, helps them find both transitional and long-term housing, as well as access to social and job-training services.

Unlike the May 1980 eruption of Mount St. Helens in Washington’s Cascade Mountains, when an earthquake ripped off a mile-wide section of the mountain’s north face and rock, hot gas and ash spewed from the volcano at rates up to 400 mph, and billions of gallons of ice water raced down the mountain side, lava from Kilauea came up from fissures.

On Oct. 3, Hawaii Governor David Ige extended the disaster emergency relief period until Dec. 1; it was the fourth extension. 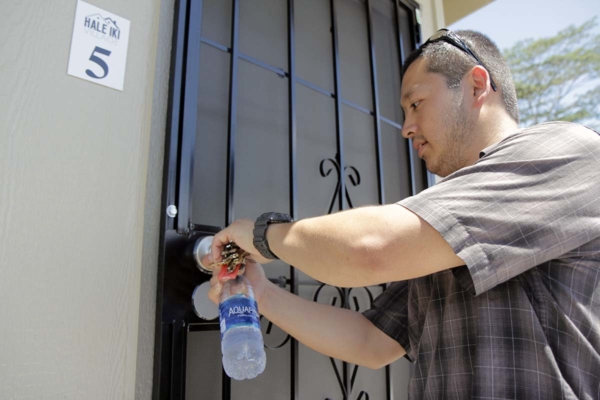 A. J. Kubo, a housing navigator and Holy Apostles’ member, unlocks the door to one of the tiny houses. Photo: Lynette Wilson/Episcopal News Service

The island of Hawaii, or the Big Island, is the youngest, largest and easternmost of the archipelago’s eight main islands. The volcanic disaster began on May 3 with a 5.0-magnitude earthquake, followed by smaller tremors and then a larger, 6.9-magnitude quake, which accelerated volcanic activity that began in April.

Then, in late August came Hurricane Lane and 35 inches of rain in a matter of days, causing floods, landslides and road closures.

Isolation is a fact of life on an island in the middle of the Pacific Ocean. Unlike Oahu, where Honolulu and a significant military presence attract a transitory population, the Big Island is closer knit, with the majority of residents born there or on another of the islands. One of the reasons the faith coalition worked so well is that many of the leaders had worked together before, said McCallister.