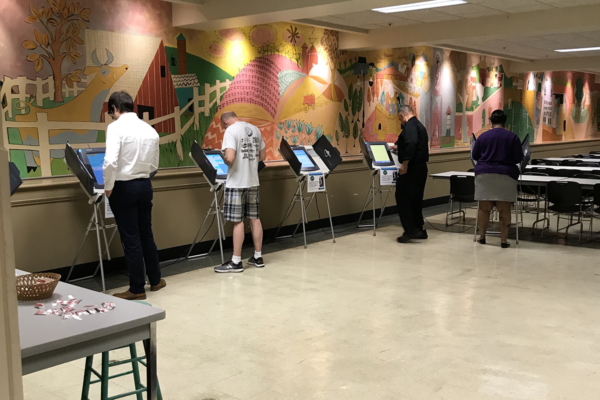 [Episcopal News Service] Episcopal congregations across the country are at the forefront of voter engagement efforts – registering voters, serving as polling places, providing ballot information and promoting civil discourse – with a week to go until the midterm elections on Nov. 6.

In Memphis, Tennessee, Calvary Episcopal Church already is welcoming downtown voters who want to take advantage of the early-voting hours the congregation is hosting in its parish hall. Other congregations, like Holy Spirit Episcopal Church in Waco, Texas, are opening their doors on Election Day for voting at their churches.

And there has been a run on the Episcopal Church’s “Vote Faithfully” stickers. More than 200 parishes and dioceses have reached out to the Office of Government Relations asking how to place orders, said Alan Yarborough, the Washington, D.C.-based agency’s communications coordinator.

“They’ve absolutely loved the ‘I’m an Episcopalian and I voted’ stickers,” Yarborough said.

Did you vote early? Already returned your absentee ballot? Wear your “I’m an Episcopalian and I Voted” sticker and post about it with #VoteFaithfully pic.twitter.com/iBnJcwuvcy

The Office of Government Relations also offers resources for Episcopalians and congregations interested in getting engaged locally. Its Vote Faithfully Toolkit provides guidance on individual action and community mobilization in ways guided by faith.

One of the links in the church’s toolkit is to a five-week curriculum on civil discourse, which Yarborough helped write. Some Episcopal congregations, such as Trinity Episcopal Church in Excelsior, Minnesota, have followed that model to cut through the bitter divisiveness that has plagued national political discourse and sometimes infected community civic engagement. Trinity, a self-described “purple parish,” sought to foster greater openness and respect within its political diverse congregation.

Such a Christian message of being respectful despite political differences resonated with Bill Steverson of Signal Mountain, Tennessee, when he met Yarborough at a conference earlier this year. Steverson asked for Yarborough’s help in launching a course on civil discourse at St. Timothy’s Episcopal Church in Signal Mountain, where Steverson serves on the vestry.

Working with the Rev. Derrick Hill, the rector at St. Timothy’s, Steverson modified the curriculum into a four-week program on consecutive Sunday afternoons in September and October, culminating with a forum with town council candidates on Oct. 28 in the parish hall.

“We at St. Timothy’s, and all God’s children, have been worried about the state of civility in our world, and it’s crept into our community,” Steverson said. Several hot-button local issues recently have inflamed tensions at council meetings, including a zoning application for a grocery store and a proposed change to school district governance.

Previously, “even when we disagreed, we were kind to each other,” Steverson said. “Over the past few years, it’s just gotten to where instead of speaking nicely … we became mean.”

He thinks the hyperpartisan political climate at the national level was a factor in the deterioration of civil discourse in this Tennessee town not far from Chattanooga, so the series at St. Timothy’s focused just on local issues. About 60 people attended the sessions, half from the congregation and the other half from the wider community. Some of the initial discussions focused on shared community values and what it means to engage in civil discourse.

“If we share the same values, why can’t we talk civilly with each other?” Steverson said.

By the end of the four weeks, residents and community leaders were talking of keeping the momentum going by holding follow-up meetings to foster more positive community interaction. Steverson hopes this success in Signal Mountain can serve as one model for greater civility at the national level. 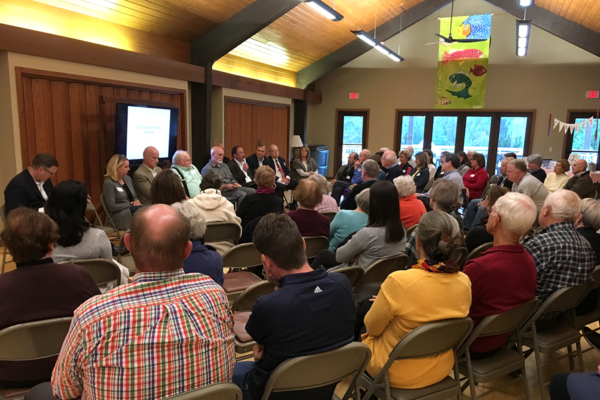 Although Episcopalians may be motivated in their advocacy by personal political beliefs, their church-based election efforts are necessarily nonpartisan. Those efforts also are grounded in church policies established by General Convention, which in July passed additional resolutions calling Episcopalians to greater political engagement. One of those resolutions highlighted the Office of Government Relations’ civil discourse curriculum as a resource for congregations.

Civic engagement is well suited to some congregations, like Calvary Episcopal Church in Memphis, which is active in serving its downtown community. The parish hall will be a site for early voting through Nov. 1.

“It fits within our ministry very well, and it serves the downtown community,” said Laurel Reisman, the parish administrator. “It’s been a very successful effort. We get a lot of walk-ins from people who work downtown.”

Holy Spirit Episcopal Church in Waco had served as a polling place on Election Day until a few years ago, when election officials ruled that the church and several other locations in the community were not eligible because they were not fully accessible to people with disabilities.

Bringing Holy Spirit into accessibility compliance was one of the goals of a renovation project that concluded this year, so the church again will be a polling place for city voters on Nov. 6.

“We take very seriously the idea of church in place,” said the Rev. Jason Ingalls, rector at Holy Spirit. “We don’t have formal parish boundaries, but we see the three neighborhoods around us as the place we’ve been called to serve.”

Part of that call is to serve the neighborhoods’ voters who otherwise might struggle to make it to one of the polling places farther away, Ingalls said. “We all know how things being nearby really increases participation.”

The Episcopal Church has stepped up its efforts to increase voter participation this year. In July, General Convention approved a resolution, D003, that condemns voter suppression and calls on governments “to create policies to enhance voter participation by, among other strategies, seeking to implement policies that will increase early voting, extend registration periods, guarantee an adequate number of voting locations, allow absentee balloting without the necessity of having an excuse, and prohibit forms of identification that restrict voter participation.”

Bishop Douglas Fisher of the Diocese of Western Massachusetts cited Episcopalians’ Christian faith as a reason to vote in an opinion piece he wrote this month in the Worcester Telegram & Gazette.

“May we all vote faithfully and bring what is of utmost value with us as we exercise this precious privilege. May we seek the leadership we need to be a nation that truly is a shining light in a world so in need of hope,” Fisher wrote, while referencing similar sentiments expressed by Presiding Bishop Michael Curry.

Episcopal congregations and institutions are backing voter registration drives in a variety of ways. At Virginia Theological Seminary in Alexandria, the campus partnered with The Skimm’s “No Excuses” campaign and hosted an event on National Voter Registration Day, Sept. 25, to support the nonpartisan goal of getting 100,000 people to commit to voting on Nov. 6.

Some students received help changing their registrations to Virginia, while others were reminded of absentee ballot deadlines in their home states, said Rachel Holm, the seminary’s registrar, who organized the event. It wasn’t part of Holm’s normal duties as registrar, but she saw it as an ideal opportunity to serve students while living out her faith.

“My personal faith is formed around the idea of being life-giving and following the example Jesus set for us,” Holm said by email. “Beyond being an important staple of our democratic nation, I feel that voting is a productive way for each person to support candidates they feel will embody life-giving practices and policies.”

Other Episcopalians also have been inspired by their faith to register and educate voters. The Church of St. Martin-in-the-Fields in Philadelphia partnered with a coalition of more than 50 congregations to hold trainings on voter mobilization efforts. The Diocese of Indianapolis joined an interfaith initiative working to reach more than 100,000 Indianans who haven’t voted before.

To support the Indiana campaign, Episcopalians have participated for the past six weeks in phone banks, calling potential voters to remind them about the midterm elections, when every U.S. House seat and a third of U.S. Senate seats will be on the ballot. The diocese will start its final push Nov. 3, said the Rev. Fatima Yakubu-Madus, who is organizing the effort as the diocese’s missioner for community engagement.

Coke said she and others involved in registering new voters have been frustrated by reports that Georgia Secretary of State Brian Kemp, a Republican who is running for governor, is enforcing a measure that could put more than 50,000 voters’ registration status in limbo.

“It’s kind of two steps forward, one step back,” Coke said, but such obstacles also are “really stiffening people’s resolve” to get more voters registered and to the polls.

At the same time, measures that threaten to decrease voter participation may have diminished effect, she said, because more people are voting early this election and are able to resolve registration issues long before Election Day.

Holy Cross’ rector printed out sample ballots and distributed them at coffee hour after the Sunday service on Oct. 28, Coke said. She took advantage of early voting and has cleared her schedule for Nov. 6.

“I’m personally taking the day off, to work [at the polls] Election Day,” she said.