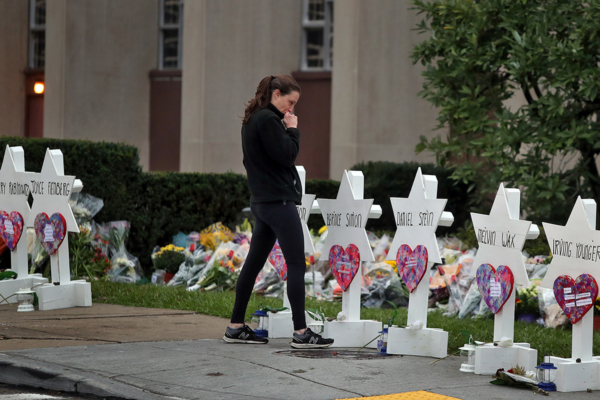 A woman reacts at a makeshift memorial outside the Tree of Life synagogue following the Oct. 27 shooting at the synagogue in Pittsburgh. Photo: Reuters

[Episcopal News Service] Episcopalians churchwide are adding their voices to an interreligious outpouring of support and grief for the Jewish community in Pittsburgh and beyond after a weekend massacre at a synagogue in the city that left 11 dead at the hands of a hate-filled gunman.

More than 2,000 people gathered at a prayer vigil Oct. 28 in Pittsburgh to mourn the victims, pray for the survivors and condemn anti-Semitism and violence. The Episcopal Bishops United Against Gun Violence followed Oct. 29 by releasing a statement calling for prayerful advocacy against gun violence and hatred.

“It is too easy for us to become immune to the horrific reports of mass shootings and hate crimes that flood our airwaves. But let us not fall prey to that temptation,” the network of more than 80 bishops said. “Let us hold the depth of this news in our hearts. A purportedly Christian man, reportedly a denizen of white supremacist websites and social media, stands accused of gathering an arsenal of weapons for the express purpose of ending the lives of people whose religion is different from his.”

The gunman, Robert Bowers, 46, was scheduled to appear in federal court Oct. 29 on charges, including a hate crime charge, that could result in the death penalty. He is accused of shouting anti-Semitic slurs as he opened fire Oct. 27 at the Tree of Life synagogue in Pittsburgh’s Squirrel Hill neighborhood.

In addition to the 11 killed, six people were wounded before Bowers gave himself up to authorities. Authorities said Bowers told an arresting officer that he “wanted all Jews to die” for “committing genocide against his people,” according to the New York Times.

Pittsburgh Bishop Dorsey McConnell issued a statement saying the massacre was more than a “tragedy.”

“A tragedy is inevitable. This was not. It was murder, murder of a particularly vile and poisonous kind,” McConnell said. “Human beings have moral agency. Someone chose to hate, and chose to kill. And now we are faced with a choice as well — to do nothing, or to reject this hatred in the strongest possible words and actions, and to refute in every way, in every forum, the philosophical foundations of anti-Semitism wherever they have gained a foothold in our churches and our society.”

McConnell asked the congregations of his diocese to keep members of the Tree of Life congregation in their prayers and “to work with others to lay the foundations for blessing, life and peace for all people.”

The shooting also prompted responses from the bishops of the two Episcopal dioceses north of Pittsburgh.

“We are people who believe that a light shines in the darkness, and that the darkness does not overcome it,” Western New York Bishop William Franklin said. “But this does not mean that we do not name darkness when we see it, and our country is in a dark time.

“Mass shootings and acts of terror, which happen in our country with sickening frequency, outrage and threaten every one of us. … This is a time to mourn the dead, to pray for and to comfort their survivors and to perform the acts of mercy of which we are capable. But even as we mourn the dead, we must mobilize to work for the common sense reform of the overly permissive gun laws which have such a devastating effect on our country.”

Franklin and Northwestern Pennsylvania Bishop Sean Rowe are both members of Bishops United Against Gun Violence.

“My friends in Christ, we are in the grip of a spiritual sickness,” Rowe said. “This illness manifests itself in our debased civil discourse. … It makes itself known both in the massacres of innocent people and the cowardice of a Congress unwilling even to consider legislation that would keep weapons such as the AR-15 used in today’s shooting out of the hands of hate-filled ideologues.”

“Our Jewish neighbors, our brothers and sisters, are fearful and we must stand with them and provide comfort and support for them and for all,” Curry said. He asked Episcopalians to pray for the gunman and his victims, for the synagogue and the city that is rallying behind it.

“And then, go out and do something,” Curry said. “Do something that helps to end the long night and helps to bring in the daylight. Visit a neighbor. Remind our Jewish brothers and sisters that they do not stand alone. Care for someone. Love. Stand for what is right and good.”

Episcopal Peace Fellowship issued a statement from its national chair, the Rev. Bob Davidson, calling on members to take action against gun violence.

“We as individuals and EPF as an organization must relentlessly pursue an end to the use of guns to carry out acts of hate and dehumanization of others,” Davidson said. “We can and we must find ways to dismantle gun violence not to curb it, or diminish it or somehow slow it.”

Bishops United Against Gun Violence has issued statements the wake of past mass shootings, with greater frequency in recent years as the death tolls mount.

The bishops also organized a public witness against gun violence in July during the Episcopal Church’s 79th General Convention in Austin, Texas.

“We will not remain silent while violence permeates our nation. Mass murder cannot be tolerated or normalized. Guns cannot be readily available to extremists who espouse hateful violence. Religious diversity cannot fall victim to extremists,” Bishops United said in its statement after the Tree of Life massacre.

“We commit to empowering Episcopalians across the country to end the scourge of gun violence in our nation through education, advocacy, and public witness. We call upon people of all backgrounds, religions, and political affiliations to advocate for local, state and federal legislation that will stop this carnage in our communities.”

The bishops also urged Episcopalians to reach out to their local Jewish communities to offer their support.

“The use of Christian scripture and beliefs to justify hate and anti-Semitism is a gross abuse of the Gospel,” the bishops said. “We call on our dioceses, churches, and faithful, and all people of goodwill, to decry and work to eradicate racist hatred, white supremacy, anti-Semitism, and vilification of the ‘other’ that perpetuates violence.”