[Episcopal News Service] A spiritual force in Iowa, whispering throughout the classic film “Field of Dreams,” reconciled a farmer to his estranged father and inspired millions of devotees. On the real ground in Iowa today, a Jesus-centered energy is creating change after every Episcopal congregation held a revival last year.

The results will be celebrated at the 166th Annual Diocesan Convention at the Cathedral of St. Paul in Des Moines Oct. 26-28, headlined by Presiding Bishop Michael Curry. He and others praise Iowa as a diocese to watch for innovation, revival and models that the Episcopal Church needs to follow, especially as data shows a significant drop in active baptized members and Sunday attendance in the church’s domestic dioceses.

Dynamic speakers from across the country have visited Iowa in 2018 as much to catch the revival vibe as to keep it going. Last month, a congregation in Waterloo, population 68,000, hosted the Rev. Daniel Vélez-Rivera, a national expert in church startups.

“I expected to see 15-20 people when I got there, but there was double that number, and they were hungry to make a difference,” said Vélez-Rivera, who was astounded by the vast cornfields near one church. “Something happened to them in these revivals, and they are capitalizing on this energy to do more.”

“There is so much for us to learn from Iowa,” said the Rev. Stephanie Spellers, canon to the presiding bishop for evangelism, reconciliation and stewardship of creation. “They are bootstrapping, especially by modeling small church vitality — the majority of their churches have fewer than 50 people.

“In my visit there in 2017, I saw hands raised in worship, grown men crying and people turning to their neighbors and sharing stories of faith. I saw stations for creating art for healing, and laypeople offering testimony that makes you want to say ‘yes’ and ‘amen.’ I saw guitars and organs, and children fully incorporated into worship. I saw churches coming to full flower, and I saw our whole future as the Episcopal Church.”

If you build it

Well before Curry’s election in 2015, and his premise that revivals were a linchpin for energizing the “Episcopal branch of the Jesus movement,” the seeds of revival had been planted among Iowans for years.

During the Iowa Diocese’s 2013 trip to its companion diocese in South Sudan, Scarfe and the Rev. Kathleen Milligan were struck by the intense emotion of the South Sudanese worshippers. 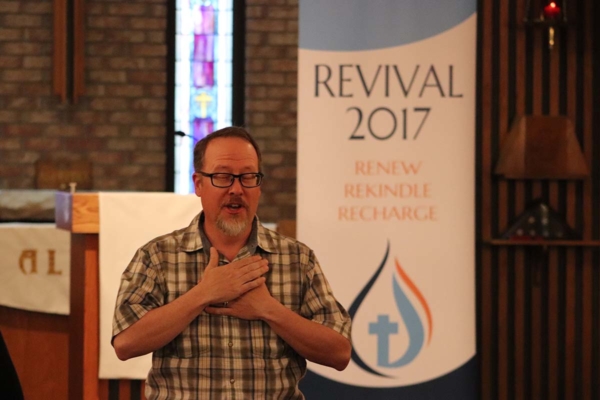 A parishioner at St. Anne’s by-the-Fields in Ankeny, Iowa, gives his testimony at a revival. Photo: Meg Wagner

Like Scarfe, Milligan had roots in Methodism and was very familiar with the power of revivals. Scarfe mentioned that since high school he had prayed daily for revival in the church. Milligan, who was rector of St John’s Episcopal Church in Dubuque, offered to pray with him. In the next couple of pre-Curry years, the idea of revival began to ignite, especially after Milligan and Scarfe learned of Lutheran revival work at Wartburg Seminary in Dubuque.

“I preached my ‘you have lost your first love’ revival sermon for the first time at the diocesan convention in 2016,” Milligan said. “That was right before the presidential election, and I was beginning to think that this was more than I thought it was about. I think it was meant, in part, to speak to what was going on in our nation in 2017.”

For 40 days before the revival, parishioners were asked to pray for revival. Each revival followed the same general format: a sermon, testimonies, and stations for prayer, anointing and renewal of baptismal vows. Scarfe did not preach at the revivals; the four main revival preachers were women.

The year of revival kicked off and ended with a revival service at the Iowa Diocesan Convention. In between, the services grew and expanded as different pieces were added, including different prayer stations.

About 1,000 people attended the 40 revivals over 10 months. The largest revival hosted 80 people; the smallest, six.

Congregations were encouraged to express their creativity to make their communities welcome at the revivals. The liturgy was based on an evangelical Lutheran revival service; the presentation varied, from gospel music to bluegrass, from finger labyrinths to journaling. At one church, a wailing wall accepted prayers on slips of paper. 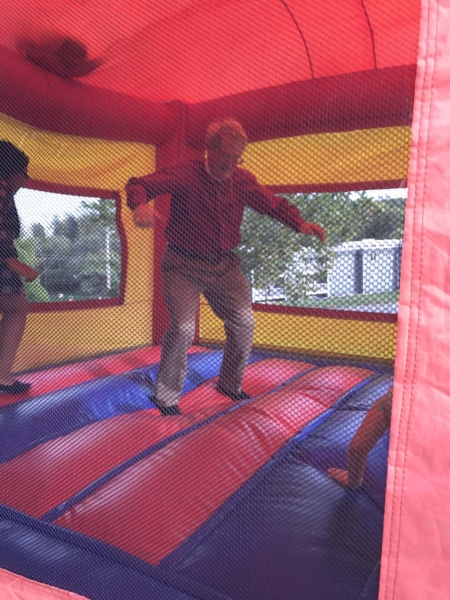 In Council Bluffs, a bouncy house “was the most unique thing I saw at a revival,” Scarfe said with a laugh. “We laughed and let the Holy Spirit loose!”

The concept of “revival” is foreign and intimidating to many Episcopalians. “And for some of our people who have grown up in Baptist and Pentecostal churches, revivals can be painful experiences, connected to emotional manipulation,” Scarfe said. “For gay or lesbian people who were prayed for to become straight at a revival, that experience may have been traumatic.”

“What makes this an Episcopal revival, and not just an altar call and goodbye, is asking what the good news looks like in your context,” said Carrie Headington, a consultant for evangelism to the Episcopal Church. “If Jesus walked into your community, what needs would he see first and how would he share the message of hope?”

For Miki Allen of Chariton, Iowa, a revival brought a new blessing. “I came thirsty and I left refilled, renewed and recharged in amazing ways,” she said in feedback collected by the diocese. “Returning to my Episcopal roots was truly a blessing. The prayers for me brought me back to the reality of the Holy Spirit’s purpose for me in my faith journey.”

During planning for the 2017 revivals, pushback from small churches made the scope expand. A diocesan task force nicknamed “Horton Hears the Small Church” reported that these parishioners weren’t keen on traveling to bigger churches to get their revival on. 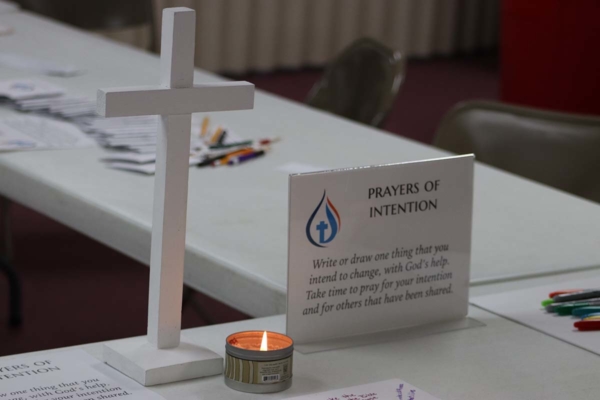 At each revival, written or drawn prayers of intention were captured on large canvas art boards that were then carried forward to each revival that came after, and finally displayed all together at the revival service at the Diocese of Iowa’s 165th Annual Convention. Photo: Meg Wagner

That’s when Scarfe turned each of his 20 visitations in 2017 into a chapter revival, with two smaller churches on Friday and the visitation the next day at the larger church in that area.

One small town’s revival drew seven people. Two were lapsed Pentecostal Christians who received prayers for the gift of the spirit. The two were inspired to join the church and today are very active, Scarfe said.

A revival was even held at the Iowa State Fair. “It was an example of how leadership of Episcopalians led us out into the community to share the body (bread) and blood (cup of salvation) with our friends and neighbors in a public setting,” David Nixon of Emmetsburg said in comments to the diocese.

For the diocese, 2017 turned into a listening tour that continues today.

“We are still seeing the seeds sown in the revivals emerging,” said the Rev. Meg Wagner, diocesan missioner for communications, reconciliation and new initiatives. “It has shifted the work of the diocese in major ways, from how we interact with church leadership to how we support and resource congregations to thrive into the future.”

Heading into this weekend’s diocesan convention, Scarfe issued a revivalist’s warning in the recent diocesan newsletter. “Watch out for revivals!” he said. “Invariably they have signaled difficult times ahead for society, and for the church in serving the needs of society. They are not spiritual entertainment, but an aspect of God seeking to find ways to get our attention.”

Curry’s participation in this weekend’s diocesan convention, Scarfe added, is a culmination of the revival movement and an invitation to keep riding its momentum. The 2017 revivals included a bus trip to Kansas City to hear Curry preach about revivals. The passengers sang revival songs on the three-hour trip.

“It is no coincidence that our chief revivalist is coming to diocesan convention to help us accentuate our revival efforts,” Scarfe wrote to Iowans recently. “Don’t let the opportunity to receive him and let him point us to Jesus’ way of love pass you by. It is our time for God’s preparation of us as effective Jesus followers and for ‘our light to shine forth like the day.’”