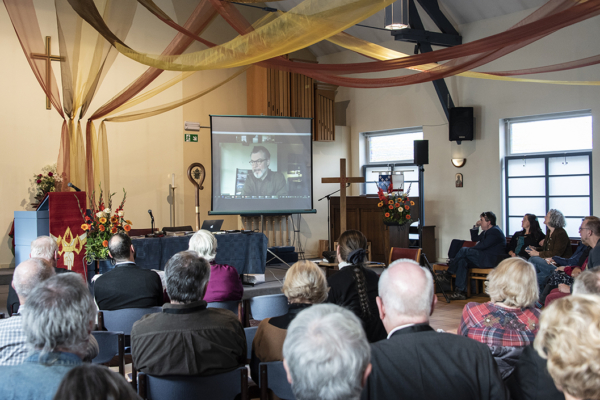 He will become the second elected bishop of the convocation, after Bishop Pierre Whalon. Edington currently is rector of Saint John’s Episcopal Church in Newtonville, Massachusetts, and director of the Amherst College Press.

“I begin to work with you from a position of learning and posture of humility,” Edington told the assembled delegates at the Convocation’s convention in Waterloo, Belgium, via cellphone. “I come to you as a person eager to learn, eager to be a disciple.”

The other nominees were the Rev. Paul-Gordon Chandler, president of CARAVAN, an international peace-building nonprofit; the Rev. Steven D. Paulikas, rector of All Saints’ Church in the Park Slope area of Brooklyn, New York, and the Very Rev. Benjamin Shambaugh, dean of the Cathedral Church of St. Luke, Portland, Maine.

Prior to his appointment at Amherst, Edington served as the senior executive officer of interdisciplinary research centers at Harvard, including the Center for the Study of World Religions and the Harvard Decision Science Laboratory. He is a life member of the Council on Foreign Relations, where he is active in the Religion and Foreign Policy program, and his essays have appeared in The Atlantic Monthly, the New York Times, the Christian Science Monitor and other national publications. His wife, Judith, is a tax attorney.

“I see the Convocation in many ways as the future of the church,” Edington said in a video message before the election. Noting that Episcopalians in Europe live in a secularized, multiethnic society where people of faith are in intentional conversation with other communities, he said: “You are already living in a culture that America will be living in in 40 years. We can together teach the rest of the church how to move into that future.”

After Edington receives the canonically required consent of a majority of the Episcopal Church’s diocesan standing committees and bishops with jurisdiction, Presiding Bishop Michael Curry will ordain and consecrate him on April 6 at the Cathedral of the Holy Trinity in Paris.